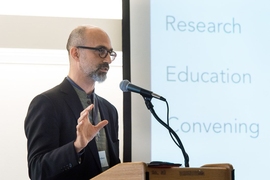 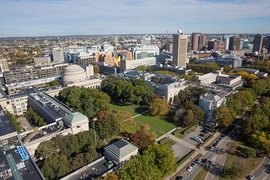 The report also highlights a new Climate Action Advisory Committee (CAAC), methods for engaging external partners, and ways to communicate the plan’s progress, including through a website and annual report.

“As we said in our climate action plan, our goal is for MIT to seize a position of leadership in the urgent fight against climate change,” Zuber says. “Thanks to the talents and energy of people across the MIT community, we are making steady progress in activating our plan. Seeing the gathering of world leaders in New York on Earth Day to begin to put the Paris Agreement into effect gives us reason for optimism — and reminds us that we have a lot of work ahead of us.”

Zuber is now finalizing membership of the CAAC, first announced in March in an agreement reached between MIT and the student-led group Fossil Free MIT. The CAAC, headed by Zuber, aims “to bring to bear on climate action the full depth and breadth of the MIT community’s talent, experience, expertise, and creativity,” the report says.

According to the report, CAAC membership will include: one director or representative each from the ESI, the MIT Energy Initiative (MITEI), the Center for Global Change Science, the Center for Energy and Environmental Policy Research, the Climate CoLab, the Joint Program on the Science and Policy of Global Change, the MIT Office of Sustainability, the Sloan Sustainability Initiative; two undergraduates, two graduate students, two postdocs, and two alumni; one additional faculty member; two additional staff members; and any interested MIT Corporation members.

The primary responsibilities of the CAAC are to: consult on the implementation of the plan; develop a set of strategies and benchmarks for MIT’s engagement with industry, government, and other institutions; and assist in finding ways to engage the broader MIT community in climate action. Plans are for the first CAAC meeting to take place in early May.

The report provides updates to many MIT initiatives that now support the plan’s five pillars.

Toward the goal of understanding of climate change and advancing mitigation and adaptation solutions, the ESI will announce a second round of environmental-solution seed grants in fall 2016. (Seed grants were also awarded last year.) In keeping with the ESI’s five-school approach, seed grants will support faculty partnerships across multiple departments to pursue critical climate and environmental research questions.

Additionally, at an Earth Day event held on campus on April 22, ESI Director John Fernandez detailed his vision for the ESI’s three key areas of focus: research, education, and convening. Primary research topics include climate science and earth systems, cities and infrastructure, and sustainable society and economy. Education initiatives will include new problem sets, lectures, and modules focused on environmental issues in required undergraduate classes, and the formation of a student “corps” for environmental action. Convening means more collaborative events across campus, such as the Hackathon for Climate, organized in January by the ESI and Climate CoLab.

“We’re at an inflection point [for climate action], both globally and institutionally,” Fernandez says. Globally, the Paris climate agreement succeeded in rallying world leaders around reducing greenhouse gas emissions. At MIT, he said, “an environmental initiative is 30 years in the making. We’re really at a point where all the planets are aligning and, from upper administration to Fossil Free MIT, the community is really engaged in ways that we can really do something substantial.”

To help accelerate progress toward large-scale deployment of low- and zero-carbon energy technologies, MITEI has been setting up its eight new Low-Carbon Energy Centers (LCECs), each focused on advancing a specific technology area key to addressing climate change; it has named two co-directors for four of the centers, with others to follow. In February, national energy provider Exelon announced plans to join several LCECs.

Last November, MITEI’s Utility of the Future Study workshop brought together faculty from MIT and the Institute for Research in Technology in Madrid, along with leaders from 20 energy companies, and members of government energy bodies, to examine alternative business models and technologies in the power sector. In May, MITEI hosts the final workshop to prepare for the study’s conclusion and report release this fall. One of the LCECs, the Center for Electric Power Systems, will launch as the study concludes, leveraging the study’s findings for further research. MITEI is also launching the Mobility of the Future Study this spring to explore ways to decarbonize the transportation sector.

“As MITEI is developing the eight Low-Carbon Energy Centers, it’s a great time to both reflect on and build on the wealth of energy research across the Institute dedicated to advancing technologies that can help address climate change,” MITEI Director Robert Armstrong says. “Our team is enjoying working with such innovative faculty members and students to shape these centers, and we’re simultaneously having many productive conversations with industry and government representatives interested in getting involved in this collaborative research initiative.”

To help share knowledge about climate change, the Climate CoLab last October launched a contest soliciting ideas on how MIT alumni can help implement the plan. Winners are being selected now, and may present their proposals at MIT and beyond. Earlier this year, the Climate CoLab launched 13 open contests calling for expert strategies in addressing climate change in many areas, including decarbonizing energy supply, shifting public attitudes and behaviors, infrastructure, waste management, and information technologies.

Furthering the fifth pillar, using the MIT community as a “test bed” for change, Zuber and Fossil Free MIT recently underscored that a 32 percent reduction in carbon emissions on campus is the minimum; the campus will strive to be carbon neutral. In January, the Office of Sustainability released MIT’s first comprehensive greenhouse gas inventory. The Office of Sustainability will report findings of the Energy and Greenhouse Gas Working Group, tasked with finding ways to reach 32 percent emissions reduction and beyond.

In March, the Office of Sustainability and Climate CoLab launched a contest for ideas from MIT and outside to reduce emissions on the MIT campus. MIT has finalized a gas supply agreement with Eversource for the campus cogeneration plant to run entirely on natural gas by 2020, with the exception of emergencies and testing. The Department of Facilities has adopted Leadership in Energy and Environmental Design (LEED) Gold version 4 as the standard for all new construction and major renovations; the department is also assessing any roof’s suitability for solar panels. A Sustainability Data Hub, an open data platform for campus energy use, is being designed, and the Department of Facilities is finalizing a carbon calculator for MIT capital projects. In November, Zuber announced MIT will soon enact “shadow” — or “internal” — carbon pricing at MIT.

Office of Sustainability Director Julie Newman heads up many initiatives of the fifth pillar, which she calls an “ambitious” undertaking. But, she says, the MIT community has quickly rallied around the idea of considering carbon reduction in all new campus projects. “Carbon reduction is not a second thought anymore,” she says. “It’s becoming integrated into the decision process. I don’t think I’ve seen a campus move so quickly to incorporate changes.”

The report stresses the need for more sustained engagement with governments, industries, and other institutions of higher education in combating climate change. “While this strategy of engagement is reflected clearly in the plan’s action items, it must go beyond these to fully leverage MIT’s convening power,” the report says.

Potential engagement opportunities include: direct interactions with other stakeholders, facilitated gatherings of industry and other partners in Cambridge and beyond, and town hall-style events with the MIT community.

The upcoming Global Change Forum hosted by the MIT Joint Program on the Science and Policy of Global Change will focus on “Corporate Strategy and Climate Change” to examine how public and private sectors can adapt to climate change. And the Center for Energy and Environmental Policy Research will host a workshop in May for industry participants, academics, and policymakers to examine research on energy and environmental policy.

The report says Zuber also plans to convene a forum in the coming months to explore ethical responsibilities of countries, industries, companies, institutions, and individuals in limiting the increase in average global temperatures to 2 degrees Celsius over preindustrial levels.

Getting the word out

Future updates of the plan will be shared via climateaction.mit.edu, which is being revamped and will relaunch in a few months. On the website, people can find information about specific roles and activities of MIT offices involved in the plan, upcoming climate-related events on campus, and contacting members of the CAAC.

The Office of the Vice President for Research plans to produce an annual report to assess MIT’s progress in implementing the plan and how the plan’s external partners are responding to the climate challenge.