Hundreds of millions sought for low-carbon research; advocacy for carbon pricing; a call to the alumni and beyond.
News Office
Publication Date:
Press Inquiries 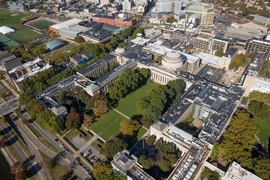 MIT is launching a multifaceted five-year plan aimed at fighting climate change, representing a new phase in the Institute’s commitment to an issue that, the plan says, “demands society’s urgent attention.”

Citing “overwhelming” scientific evidence, “A Plan for Action on Climate Change” underscores the “risk of catastrophic outcomes” due to climate change and emphasizes that “the world needs an aggressive but pragmatic transition plan to achieve a zero-carbon global energy system.”

To that end, MIT has developed a five-year plan to enhance its efforts in five areas of climate action, whose elements have consensus support within the MIT community:

The plan calls for MIT to convene academia, industry, and government in pursuit of three overlapping stages of progress.

“The first step,” according to the plan, “is to imagine the future as informed by research: e.g., What is the optimal mix of energy sources in 15, 25 and 35 years, in order to meet emissions targets and eventually reach a zero-carbon global energy system? And how can societies across the globe best adapt to damaging climate impacts in the meantime?”

“Next,” the plan continues, “it will be vital to establish the policy and economic incentives to achieve that future. Finally, clear technological goals and aligned incentives will focus and accelerate the research and development required to achieve success. All three phases need to be continuously refreshed: Research and development should continuously inform timelines and targets. The success of this strategy depends on the best efforts of all three sectors.”

The plan specifically asserts the need for a price on carbon in order to align the incentives of industry with the imperatives of climate science.

The plan also announces that MIT will not divest from the fossil fuel industry. This decision and the overall plan emerged from more than a year of broad consultation with the MIT community, including extensive public discussion led by the Committee on the MIT Climate Change Conversation, and engagement with the student-led group Fossil Free MIT. This group originally petitioned MIT to divest from 200 companies and more recently has asked for “reinvestment in campus sustainability, and a reinvention of the approach that MIT takes toward climate change.”

In his announcement letter today to the MIT community, President L. Rafael Reif said the plan would not have taken the shape it did without Fossil Free MIT’s “willingness to work with us toward the shared goal of meaningful climate action.” He encouraged the group’s members to join in the work ahead.

A call to service, on campus and beyond

In his letter, Reif called upon all members of the MIT community to take action. “There is room and reason for each of us to be part of the solution,” he wrote. “I urge everyone to join us in rising to this historic challenge.”

Alumni are being called upon to imagine how they can help MIT execute the plan. A competition announced in the plan has been created in order to elicit the most effective ways for the MIT alumni community to take personal and combined action.

“MIT’s 130,000 alumni represent an exceptional untapped resource for driving substantive progress on climate change,” the plan says, “and we are certain that our graduates will know better than we do how to make the most of their strength, from their technical expertise to their professional and community networks.”

The competition will be hosted by the MIT Climate CoLab, a digital community that engages nearly 50,000 people from over 170 countries to crowdsource climate priorities and novel solutions. The plan calls for the Climate CoLab to expand its overall capacity, so that MIT can serve as a vital hub of crowdsourced solutions to climate change.

A year and more in the making

The plan is the result of an MIT-wide initiative on climate launched in May 2014, and led by Provost Martin Schmidt; Vice President for Research Maria Zuber; MIT Energy Initiative (MITEI) Director Robert Armstrong; and Susan Solomon, founding director of MIT’s Environmental Solutions Initiative.

In September 2014, the initiative appointed the Committee on the MIT Climate Change Conversation, chaired by Roman Stocker, then associate professor of civil and environmental engineering, to lead public discussion of MIT’s options for addressing climate change.

The plan credits members of the committee, as well as members of Fossil Free MIT, for having “brought climate change to the top of MIT’s institutional agenda by urging that MIT assume a role of public leadership.”

“Today’s plan is truly MIT’s plan,” Zuber says. “There is a hunger across the Institute to apply MIT’s strengths to the problem. With a firm theory of the case for how to bring cohesion to our work in science, engineering, and policy, we are now poised to set forth on five years of critical work. Today is an important beginning.”

In his letter to the MIT community, Reif wrote that MIT will rely on Zuber to lead MIT’s research, outreach, and convening efforts.

“President Reif and Vice President for Research Zuber have led us to a very important day in the Institute’s history,” says Diana Chapman Walsh, a member of the Executive Committee of the MIT Corporation (MIT’s board of trustees) and former president of Wellesley College. “The world is calling for leadership at a time of urgency and uncertainty. Today, MIT is deepening its commitment to meaningful action.”

Former Secretary of State George P. Shultz, who earned a PhD from MIT in 1949 and served on the economics faculty in the 1950s, has urged the MIT community to take action on climate change and endorses today’s plan, calling it “a terrific document. It is inspirational that MIT is working on the subject with such energy and impact.” Shultz chairs the External Advisory Board of the MIT Energy Initiative.

Robert Armstrong, director of the MIT Energy Initiative, says, “The plan recognizes the central role that climate change will have in driving transformation of the global energy system. The eight low-carbon energy centers leverage MIT’s strengths in working across disciplines and in deeply engaging with industry to tackle society’s greatest challenges.”

The plan announces that in the interest of fighting climate change, MIT will not divest from companies in the fossil fuel sector.

“We believe that divestment — a dramatic public disengagement — is incompatible with the strategy of engagement with industry to solve problems that is at the heart of today’s plan. Combatting climate change will require intense collaboration across the research community, industry and government,” the plan states.

Divestment has been a principal aim of Fossil Free MIT, which had gathered 3,400 signatures from members of the MIT community, asking for divestment from 200 companies in the fossil-fuel industry. MIT hosted a public debate on the issue in April, in which MIT faculty, professors from other institutions, and investment executives addressed the potential merits and drawbacks of divestment.

The plan states that MIT is “not naïve about the pernicious role of some segments of the fossil fuel industry in creating the current policy deadlock. We deplore the practice of ‘disinformation,’ through which some industry players and related groups have actively obstructed clear public understanding of the problem of climate change.”

MIT’s position, the plan states, is that “well-crafted policies can harness the creative forces of industry to serve the common good.” Further, it argues “that growing awareness of climate change may be generating a tipping point in that policy dynamic now. Witness the fact that in Paris last Friday, October 16, the CEOs of ten of the world’s largest oil and gas companies declared that their ‘shared ambition is for a 2°C future,’ and called for ‘an effective climate change agreement’ at next month’s 21st session of the United Nations Conference of Parties to the UN Framework on Climate Change (COP21).”

“Six of those companies — BP, Eni, Saudi Aramco, Shell, Statoil, and Total — are members of MITEI,” the plan continues. “We believe we have greater power to build on such momentum not by distancing ourselves from fossil fuel companies, but by bringing them closer to us.”

Ultimately, the plan states, massive changes are needed in the production, distribution, and consumption of energy to avert a potential climate catastrophe: “To solve this global problem, humanity must reorder the global energy status quo.”

Robert Millard, chairman of the MIT Corporation, calls the plan “bold, respectful, complete, honest, and well-reasoned. It therefore reflects,” he says, “the highest aspirations of MIT.”

In an article for The Boston Globe, David Abel writes about MIT’s efforts to combat climate change. Abel notes that, “MIT is embarking on an unprecedented program to accelerate progress on low-carbon energy technologies.”

Prof. Maria Zuber, Vice President for Research, speaks with WGBH Morning Edition host Bob Seay about MIT’s plan to confront climate change. Underscoring the need to engage everyone in the solution -- academic research institutions, governments and industry -- Zuber remarked, "MIT, although we're a top institution, we are humble enough to realize that we can't do this alone. Climate change is a complex problem, it's a global problem, and it's going to require all the smart people... to scale up and make this a global solution."

Matthew Nisbet, a professor at Northeastern University who focuses on climate change communication, writes for The Conversation about MIT’s Climate Action Plan. Nisbet writes that MIT’s plan can “serve as a model for how major research universities can accelerate effective societal actions on climate change by collaborating with a diversity of industry members.”

MIT’s sustainability community gets to work