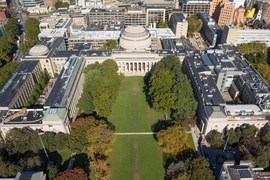 ↓ Download Image
Caption: “It is crucial that MIT seize a leadership role in addressing the urgent issue of climate change, and I believe that this agreement puts us in an even stronger position to lead effectively and successfully,” Maria Zuber says.

Caption:
“It is crucial that MIT seize a leadership role in addressing the urgent issue of climate change, and I believe that this agreement puts us in an even stronger position to lead effectively and successfully,” Maria Zuber says.
Credits:
Photo: Christopher Harting/AboveSummit

After months of dialog and negotiation, the student-led group Fossil Free MIT and the MIT administration have reached an agreement that has brought to an end the group’s sit-in, which began on October 22, in front of the administrative offices.

Both sides say that the new agreement (see text below) provides a positive set of plans that will help to meet the essential goals that the student group has been advocating, and will set in motion activities and structures to help ensure that MIT makes significant progress in dramatically reducing its own use of fossil fuels and in promoting serious local, national, and international goals toward reducing human impact on the Earth’s climate.

Members of Fossil Free MIT have been meeting for months with MIT’s Vice President for Research Maria Zuber, and they have identified four areas where they will work together to build on and enhance MIT’s “Plan for Action” announced last fall. Zuber, who was charged with implementing those plans, will work with the student-led group to advance these four specific goals.

The four action areas are: Moving toward campus carbon neutrality as soon as possible; establishing a climate action advisory committee to consult on the implementation of the Plan for Action; developing a set of strategies and benchmarks for MIT’s engagement with industry, government, and other institutions; and convening a forum on the ethics of the climate issue.

“For months now, I have been meeting regularly with several members of Fossil Free MIT, and I deeply admire their commitment to the cause and the honorable way they have pursued it,” said Zuber. “It is crucial that MIT seize a leadership role in addressing the urgent issue of climate change, and I believe that this agreement puts us in an even stronger position to lead effectively and successfully.”

A member of Fossil Free MIT, speaking for the group, says the group  “continues to support targeted divestment of the endowment from fossil fuel companies, and we see this as complementary to industry engagement and MIT's Climate Action Plan. We're excited to keep working with the administration on areas of common ground.”

Zuber says that she, along with MIT students, faculty, staff, and alumni, are moving forward on the four basic components of this new agreement.

MIT President L. Rafael Reif praised the agreement, saying, “To the student negotiators from Fossil Free MIT and to Vice President Zuber: I am inspired by both your conduct and your results. Through respectful discussion, creative thinking, and sheer persistence, you transformed a moment of impasse into an opportunity to accelerate progress against climate change. I hope we can all join now, with renewed momentum, in the urgent work ahead.”

Below is the agreement reached by Fossil Free MIT and the MIT administration.

Over the course of many productive conversations during the last few months, Maria Zuber, MIT’s Vice President for Research, and members of the student-led group Fossil Free MIT (FFMIT) have discussed their shared interests with respect to accelerating solutions to the urgent problem of global climate change.

The conversations arose from concerns articulated by FFMIT on three issues: the trajectory of campus carbon emissions reduction; investments in fossil fuel companies through MIT’s endowment; and the role of disinformation in hindering action in the global debate over climate change. Vice President Zuber has listened to these concerns, described some of the infrastructural challenges associated with decarbonizing campus energy generation, reinforced the senior MIT administration’s belief in a strategy of constructive engagement with industry, and reiterated its support for providing accurate, high-quality information on climate change to the public.

Based on these conversations, Vice President Zuber and FFMIT have identified four areas for building upon and enhancing MIT’s Plan for Action on Climate Change, released in October 2015. As MIT’s Vice President for Research, Professor Zuber has oversight responsibility for the plan. She and FFMIT intend to work jointly to bring these four ideas to fruition.

First, the MIT senior administration and FFMIT agree that the campus carbon emissions reduction goal included in the plan – a 32% reduction by 2030 – is a floor, not a ceiling. As MIT’s Office of Sustainability has articulated, the campus aspires to carbon neutrality as soon as possible. The Office of Sustainability, which recently published MIT’s first campus greenhouse gas inventory, has challenged the community to advance solutions to help achieve this goal, and intends to report yearly on progress.

Second, Vice President Zuber will establish and chair a climate action advisory committee to advise and consult with her on the implementation and ongoing assessment of MIT’s Plan for Action. The committee’s membership will include faculty, students, postdocs, staff, Corporation members and alumni who wish to engage in the process in an open, collaborative way, inviting implementation ideas from across the MIT community and bringing to bear the full depth and breadth of the MIT community’s talent, experience, expertise, and creativity.

Third, because a strategy of engagement with industry, government, and other institutions lies at the core of MIT’s Plan for Action on Climate Change, the new climate action advisory committee will provide advice to identify, develop, and publish engagement strategies and benchmarks. Benchmarks will include inputs and activities, such as number of meetings held, in addition to outcomes aligned with a 2°C future: for example, these may include steps taken by industry to develop and implement 2°C business strategies and to support a 2°C public policy framework. The committee will also provide advice and input on an annual report to be produced by the Office of the Vice President for Research to assess MIT’s progress in implementing the Plan for Action and engagement partners’ response to the climate challenge.

Fourth, working with students, faculty, staff, alumni and partners, Vice President Zuber will convene a forum to explore ethical dimensions of the climate issue. The forum will seek to shed light on critical questions like the ethical responsibilities confronting all stakeholders – countries, industries, companies, shareholders, institutions, individuals, and different generations – if we are to limit the increase in average global temperatures to 2°C over pre-industrial levels, as well as the ethical dimensions of climate change communication.