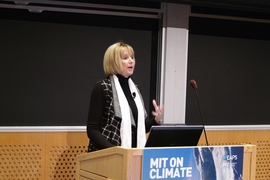 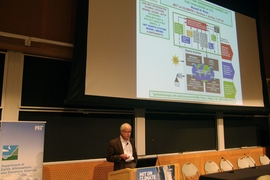 In a daylong symposium at the Stata Center on Wednesday, called “MIT on Climate: Science + Action,” a series of presentations described the severity of the global climate change threat, the wide variety of related impacts on human society and economies, and actions that might be most effective in minimizing the damage.

“There will always be more to learn, but we have to act on what we already know,” said Robert van der Hilst, head of MIT’s Department of Earth, Atmospheric and Planetary Sciences (EAPS), which sponsored the event.

Maria Zuber, MIT's vice president for research, said that "addressing climate change is perhaps the defining environmental challenge of our time. The key issue before us now is what role can and must MIT play in this national and global issue?" And Raffaele Ferrari, the Breene M. Kerr Professor of Oceanography and a co-organizer of the symposium, added that "action on climate change is needed, and it is crucial that we continue basic research if we are to reach a positive outcome for humanity and the environment.”

Keynote speaker Marcia McNutt, editor-in-chief of Science, began by addressing the question of whether or not climate change is a case of “settled” science. “It depends on the kind of question you ask,” she said. “Is the climate changing due to human activity? Yes. We know enough about that question to know that we should be taking action to limit emissions. But, from a scientific standpoint, there are a lot of questions that remain to be answered.”

Such remaining questions, she said, include just how fast the effects of climate change are occurring, especially those effects that may have the greatest impacts on human society, such as how fast (and how far) sea level may rise. Such questions affect significant social, economic, and political decisions, not just scientific and technological ones. For example, “Should the San Francisco Airport be moved inland?” she asked, and pointed to the impacts of storm surges on the New Jersey shoreline, both during Hurricane Sandy and the recent snowstorm, to illustrate the consequences of failing to take proactive measures to deal with vulnerable facilities close to sea level.

As for questions that have been raised by climate change skeptics about a so-called hiatus in global warming since 2000, McNutt said that research, including some published last year in Science, clearly showed that this perceived pause was a result of improperly calibrated temperature readings that failed to account for differences between measurements taken from ships and those taken from buoys. Proper correction for those offsets, she said, “eliminates the hiatus.”

One key issue in determining that rate of sea level rise has to do with how rapidly ice sheets in the Arctic and Antarctica may collapse as a result of warming. “We could get rapid ice-sheet collapse, or we could get gradual melting, and we don’t know yet,” McNutt said. This information is key to deciding how urgently buildings and other facilities must be moved, raised, or protected by seawalls. “It’s a very important problem to solve,” she said.

Other open questions, McNutt said, concern the detailed effects of ocean acidification as a result of carbon dioxide absorption, the impact of warming on droughts and flooding events, increases in the prevalence and intensity of storms, and the effect of increases in lightning strikes. “We need better predictions” of all the effects that impact human activities, she said, and “better information can guide better decisions.”

A series of talks by present and former MIT faculty members outlined the state of present knowledge about climate systems, from studying the atmospheres of distant planets to understanding the links between climate and the evolution of life, including major extinction events and swings between hothouse eras and “snowball Earth” epochs, when the planet was frozen from pole to pole. Such research aims, among other things, to resolve some of the many complex interactions triggered by changing climates and to assess their likely impacts on human activities.

Laying odds on the “climate gamble”

Ronald Prinn, the TEPCO Professor of Atmospheric Science in EAPS and director of MIT’s Center for Global Change Science, summarized the need for making major policy decisions in the face of remaining uncertainties, by showing a pair of “roulette wheels.” These were designed to show, based on the best available global climate and economic models, the relative likelihoods of temperature rise under a “business as usual” scenario, versus a scenario in which strict emissions controls are put into place.

Without such action, he showed, there is about a 25 percent chance that the average global temperature increase by the end of this century will be more than 6 degrees Celsius — an amount that would be catastrophic for many regions of the world. And, there is an 80 percent chance of exceeding a 2-degree increase, which is the amount the world’s leaders have agreed is an upper limit on what can be accepted without major disruptions to global economies and populations. Those increases are calculated relative to 1990 levels, the baseline used in the recent Paris agreements, but a more relevant measure, he said, was the increase from pre-industrial levels. By that measure, “business as usual” leads to a staggering 97 percent chance of exceeding a 2-degree increase.

But that is not an inevitability, Prinn stressed. If strict emissions standards are put in place over the next few years, the chances of exceeding the 2-degree threshold would drop dramatically, as shown in the second wheel. “That’s the future we would rather live in,” he said.

A series of speakers then addressed the questions of what kinds of actions could and should be taken to combat the climate-change risks. They described the noncarbon energy technologies that are available; the economic and health benefits of pursuing those options; the psychological, social, and political obstacles to taking action; and processes that can aid in negotiating agreements on mitigation measures and harnessing “collective intelligence” through the Internet to find, evaluate, and disseminate solutions.

While most studies of alternative energy sources focus on the costs and direct climate impacts, Noelle Selin, the Esther and Harold Edgerton Career Development Associate Professor in EAPS and an associate professor in the Institute for Data, Systems, and Society, pointed out that switching to noncarbon energy sources can also have very significant near-term effects on health, because particulate matter associated with disease goes hand-in-hand with fossil fuel use. Particle emissions are believed to be responsible for 3 to 7 million premature deaths per year worldwide, she said, but the emissions reductions agreed to in Paris last fall could significantly improve that situation. “That’s potentially a real motivator for action,” she said.

A final panel discussion focused on what could and should be MIT’s role in the issue of climate change, as related to fundamental research on the science and technology; educating the next generation of researchers and the public; and the potential for leading by example.

Valerie Karplus, an MIT alumna and assistant professor at the MIT Sloan School of Management, said one of the most important things MIT students and faculty can do is “to talk to skeptics. We need to build bridges rather than create divisions.” John Fernandez, newly appointed head of MIT’s Environmental Solutions Initiative, suggested holding a series of several events each year on environmental change, “in which people from the multitude of disciplines in MIT’s five schools play out scenarios” to find practical approaches to addressing problems.

Dennis Whyte, head of the Plasma Science and Fusion Center, said one important lesson is “don’t do what hasn’t worked.” Specifically, many researchers have found ingenious new ideas for energy production “that no one will ever use” because of economic, manufacturing, or materials supply issues, he said. But technologies that do have commercial potential “are new opportunities for action” for the scientific and technical community. “You have to be ambitious and realistic at the same time,” he said.

Prinn said that given the clear evidence of human-caused climate change, “renewables need to be the major source of energy for the world, regardless of whether we’re on a high, low, or medium path” in terms of the speed of global warming. So now a major task for researchers is “to see who can produce renewable energy at the least cost,” he said, adding that such solutions may differ depending on locations. “It’s not one solution for the world.”