Chronicling the rapid pace of genomics 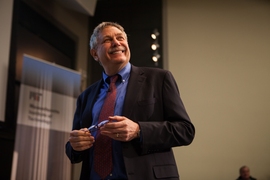 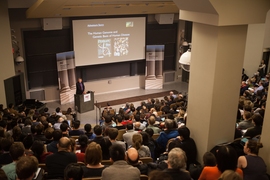 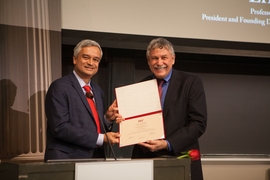 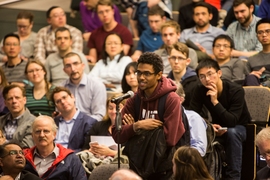 ↓ Download Image
Caption: A student posed a question to Lander following his lecture. 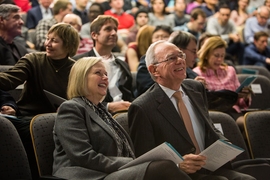 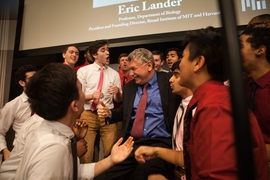 Caption:
Eric Lander, an MIT professor of biology, is the 2016-2017 recipient of the James R. Killian Jr. Faculty Achievement Award.

Caption:
Lander delivered his lecture to a standing-room-only audience in MIT’s Room 10-250.

Caption:
A student posed a question to Lander following his lecture.

Caption:
The MIT Logarhythms serenaded Lander before his lecture.

Thirty-three years ago, scientists knew the genomic location of exactly one disease-causing gene — the gene that causes Huntington’s disease. But since that time, they have discovered thousands more disease-causing genes, as the field of human genomics has accelerated at a pace previously unimaginable, MIT Professor Eric Lander told a packed audience at yesterday’s James R. Killian Jr. Faculty Achievement Award Lecture.

“On any given day, you may be incredibly frustrated by how slow it’s going: Things are failing, you’re not making progress. But over the course of years, decades, it’s stunning. For me, this is so much faster than I could have ever imagined. That’s what’s so special about science,” said Lander, an MIT professor of biology and the recipient of the 2016-2017 Killian Award.

Established in 1971 to honor MIT’s 10th president, James Killian, the Killian Award recognizes extraordinary professional achievements by an MIT faculty member. Lander was selected for the award for his own contributions to the rapid growth of human genomics, as well as his accomplishments in teaching and science policy. He is the president and founding director of the Broad Institute of MIT and Harvard, and also served as co-chair of the President’s Council of Advisors on Science and Technology under President Barack Obama from 2009 to 2017.

“Professor Lander’s contributions to science are deep and wide-ranging, including scientific discoveries, writing of crucial science policy, leadership in both the local and global research communities, and a long history of inspiring a love of biology in students,” says the award citation, read by Krishna Rajagopal, chair of the MIT faculty, before yesterday’s lecture.

Rajagopal paused for a serenade from the a cappella group the MIT Logarhythms, which performed a rendition of “Signed, Sealed, Delivered (I’m Yours)” for a delighted Lander, who continued the Valentine’s Day theme with his lecture.

Lander began his talk, which was held on Valentine’s Day, with a “love letter” to MIT and the lecture hall where he spoke, Room 10-250. That room played a key role in launching a career in human genetics that once seemed improbable for Lander, who earned his BA in mathematics from Princeton University in 1978 and his PhD in mathematics from Oxford University in 1981 as a Rhodes Scholar.

“Some people have their careers planned out in advance,” Lander said. “That was not me. I knew I didn’t want to do mathematics as a career, but I had no idea what I really wanted to do.”

After earning his PhD, Lander taught managerial economics at Harvard Business School for a couple of years, but his heart wasn’t in it. At the suggestion of his brother, Arthur, he started sitting in on neuroscience classes at Harvard, which eventually led him to a course in genetics, where he found his true love.

In 1984, he took a leave of absence from Harvard and began working on worm genetics in the lab of MIT Professor Robert Horvitz. One day in 1985, Professor Barbara Meyer, who had a lab next door, introduced him to David Botstein, another biology professor, who was trying to develop approaches to mapping human genetic diseases. That conversation, which Lander described as a key turning point in his life, took place outside Room 10-250.

“I pretty much dropped everything else I was doing in the world in order to work on this idea of whether you could map genes in humans for complex traits,” Lander recalled.

Lander was appointed to the faculty of MIT’s Department of Biology in 1990, and once again, Room 10-250 played a key role in his career as the place where he began co-teaching 7.01/7.012 (Introductory Biology), a course that he co-developed in 1991-1992 with Professor Emerita Nancy Hopkins. In recognition, Hopkins and Lander were named Class of 1960 Fellows for “outstanding teaching and course development.” Lander still teaches that course, although it has now moved to a larger lecture hall.

“The gift of teaching is the gift of being re-inspired by young people every year, again and again. Teaching has been such an amazing part of my life at MIT. It is why we’re here, and I’m enormously grateful for that opportunity,” said Lander, who has also developed a popular edX version of Introductory Biology.

Lander also credited MIT, in particular former President Charles M. Vest and former Provost Robert Brown, for their roles in the founding of the Broad Institute, which opened in 2004 to build on the progress made by the Human Genome Project. Getting Harvard and MIT to join forces, along with several other Boston-area institutions, was not an easy task, he recalled.

“MIT has a long history of being able to make the right thing happen,” Lander said. “Had it not been for MIT sticking with the idea from beginning to end, this could never have happened.”

Lander described the arc of his career as a biological adventure story that demonstrates “how much farther things can go than you could ever possibly imagine.”

In 1985, when he began working with Botstein, only one human disease-causing gene, the Huntingtin gene, had been mapped to a specific chromosome. The location of the gene mutation that causes cystic fibrosis was also soon identified, but scientists were unsure whether they would ever be able to locate genes involved in complex disorders such as heart disease or Alzheimer’s disease, which are influenced by many genes.

A major step forward in being able to identify such genes occurred with the completion of the Human Genome Project, led by Lander and others, in 2003. That map has allowed scientists to identify 4,000 genes that cause disease on their own; it also gave scientists the opportunity to start discovering genes associated with multigene diseases.

As the cost of sequencing genomes came down (it’s now about $1,500 per genome), scientists were able to sequence thousands of genomes to identify common genetic variants that are linked to specific diseases. Using this approach, scientists, including many at the Broad Institute, have found 108 variants associated with schizophrenia, 200 associated with inflammatory bowel disease, and thousands more linked to other human disorders including heart disease and Alzheimer’s disease.

“It’s possible to dissect and find for a typical common disease 50, or 100, or 150 genes in the human genome that have an effect on that disease. That took, from a conversation in the hallway outside 10-250 in 1985, to somewhere around 2010, based on the whole scientific community working together. It’s mind-blowing,” Lander said. “We never thought we’d ever get to this point.”

Lander concluded his lecture with a “trip report” of the eight years that he served as a co-chair of the President’s Council of Advisors on Science and Technology (PCAST).

During that time, the council wrote 38 reports on topics ranging from antibiotic resistance and the H1N1 flu outbreak, to advanced manufacturing and nanotechnology. Many of those reports have formed the basis of new executive orders or major policy initiatives.

Lander also noted that the very first iteration of PCAST, established in 1958 by President Dwight D. Eisenhower, was chaired by none other than James R. Killian Jr., who was then MIT’s president. During Lander’s tenure, the council included six MIT faculty, alumni, and Corporation members, demonstrating the important contribution that MIT continues to make in informing national policy, he said.

“MIT has played such a major role over the course of decades in ensuring that science has its rightful place in society,” Lander said. “While MIT does not have politics, we do have values. Those include the power of knowledge and truth, and the power of diversity. That is what is powering science. This great institution has contributed so much to those principles, which have largely driven the economic growth, security, and health of this country. I have no doubt in the years ahead that those values will outlast anything.”