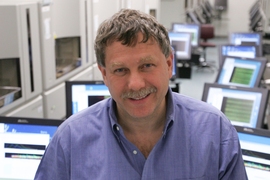 ↓ Download Image
Caption: “I am tremendously honored, especially because this is an award conferred by my faculty colleagues at MIT. There is no higher recognition,” Eric Lander said.

Caption:
“I am tremendously honored, especially because this is an award conferred by my faculty colleagues at MIT. There is no higher recognition,” Eric Lander said.
Credits:
Photo: Rick Friedman

Eric Lander, a biologist widely known for his work in mapping the human genome, has been named the recipient of the 2016-2017 James R. Killian Jr. Faculty Achievement Award.

Lander has greatly influenced science policy as co-chair of the President’s Council of Advisors on Science and Technology, which advises the White House, and he is highly regarded as a teacher. For more than 20 years, he has taught an MIT introductory biology course that he recently brought to the edX platform, where it has become one of the most popular courses.

“Professor Lander’s contributions to science are deep and wide-ranging, including scientific discoveries, writing of crucial science policy, leadership in both the local and global research communities, and a long history of inspiring a love of biology in students,” according to the award citation, which was read at the May 18 faculty meeting by Janet Sonenberg, chair of the Killian Award selection committee and a professor of theater arts.

Lander is also the president and founding director of the Broad Institute of Harvard and MIT, which is “internationally recognized as a leading model of interdisciplinary and cross-institutional collaboration,” according to the award citation.

“I am tremendously honored, especially because this is an award conferred by my faculty colleagues at MIT. There is no higher recognition,” Lander said.

From 1990 to 2003, Lander was the principal leader of the international Human Genome Project. With his colleagues, he developed many of the techniques used to map the human genome, and he has done pioneering work on genetic variation, regulatory elements, long noncoding RNAs, three-dimensional folding of the human genome, and methods to systematically identify the genes essential for biological processes.

“Unlocking the information in genomes has been one of the defining scientific revolutions of the past quarter century. With the Killian Award, the committee acknowledges the transformative effect Professor Lander has had on the study of biology and medicine. We honor Professor Eric S. Lander for these extraordinary contributions, and for his roles as a gifted leader, teacher, mentor, and public advocate for science at the highest levels,” the award committee wrote.

In 2008 President Barack Obama appointed Lander co-chair of the President’s Council of Advisors on Science and Technology, which has since produced dozens of reports on topics such as antibiotic resistance, flu preparedness, and advanced manufacturing. Many of those reports have formed the basis of new executive orders or major policy initiatives.