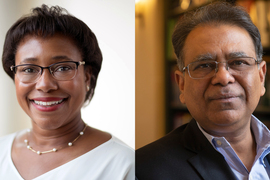 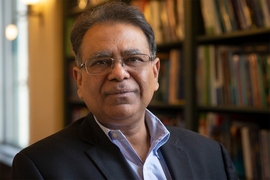 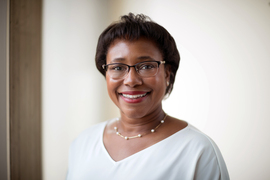 Hammond, who chairs MIT’s Department of Chemical Engineering, is renowned for her work in developing novel polymers and nanomaterials, while Chakraborty, the founding director of MIT’s Institute for Medical Engineering and Science (IMES), is a pioneer in applying computational techniques to challenges in the field of immunology, including vaccine development.

“At MIT, the distinction of Institute Professor designates the best of the best — and that is exactly how I would describe Paula Hammond and Arup Chakraborty,” says MIT President L. Rafael Reif.

“Paula’s boldness and creativity as an engineer, her excellence as an educator, and her leadership on issues of equity and inclusion have long made her an MIT star,” Reif says. “Arup is perhaps best known as the visionary founding director of IMES and, of course, for his seminal contributions toward the development of a vaccine for HIV. I have always admired his extraordinary ability to explain complex issues — across a range of disciplines — with precision and clarity. Paula and Arup are great ambassadors for the Institute and our community. More than that, they are among MIT’s finest citizens.”

Chakraborty, a chemical engineer by training, has wide-ranging research interests that span biology, chemistry, and physics. His work in immunology has led to discoveries pertinent to T cell activation, the nature of human T cell repertoires, and antibody and T cell responses to infection and vaccination. He has also contributed to the development of potential new vaccines for highly mutable pathogens such as HIV.

“Arup has made seminal contributions in creatively addressing complex interdisciplinary issues at the confluence of molecular engineering, theoretical immunology, and the physical sciences, resulting in — as just one of many examples — advances toward the development of a vaccine for HIV,” Schmidt and Danheiser wrote in their announcement.

At the University of California at Berkeley, where he began his faculty career, Chakraborty pioneered the integration of quantum chemical calculations with macroscopic approaches in chemical engineering. For over two decades, much of his work has focused on developing and applying approaches rooted in statistical physics to tackle questions in immunology.

“Over 20 years ago, I had a hunch, which proved to be correct, that the convergence of physics-based theoretical/computational approaches and experimental immunology would lead to a deep understanding of how the immune system functions, and this knowledge could be harnessed to advance health,” says Chakraborty, who joined the MIT faculty in 2005. “I have truly enjoyed working with basic and clinical immunologists, as well as physicists, chemists, and engineers.”

His work with immunologists led to discoveries such as how the immune synapse functions during T cell activation, how T cells respond to minute numbers of antigens, and why such responses are “on” or “off.” With MIT professor of physics Mehran Kardar, he provided new insights on how developmental processes shape a T cell repertoire that can mount pathogen-specific responses to a diverse and evolving world of microbes.

This work also led to new insights (with Bruce Walker, director of the Ragon Institute) of why humans with certain genes can control HIV infections more efficiently while also being prone to autoimmune diseases. Chakraborty’s work on virus evolution and T cell and antibody responses to infection and vaccination (with professor of biological engineering Darrell Irvine and others) has led him to design novel immunogens for the T cell component of an HIV vaccine that is now in preclinical trials.

Chakraborty’s work with Institute Professor Phillip Sharp and professor of biology Richard Young led to the discovery that the transcription of genes key for maintaining cell identity (such as heart cell, cancer cell, etc.) is regulated by the formation of phase-separated bodies that are now called “transcriptional condensates.”

Chakraborty is the Robert T. Haslam Professor of Chemical Engineering and a professor in the departments of physics and chemistry. One of his most significant strengths, according to the colleagues who nominated him, is his ability to foster collaborations across many different departments.

As the founding director of MIT’s Institute for Medical Engineering and Science, Chakraborty worked to enhance interdisciplinary collaborations between MIT researchers working in life sciences, physical sciences, engineering, and medicine, as well as to establish ongoing partnerships with medical institutions in the Boston area.

“I felt that if I could help catalyze these pan-MIT efforts and help bring new faculty and students to MIT, it would be worth devoting significant effort toward this goal,” Chakraborty says. “I think that IMES enhances MIT’s efforts to bring disciplines together in an integrative way to advance health, and helps educate students who can work seamlessly across disciplines.”

He has also passed that interdisciplinary spirit on to the students and postdocs he mentors: Twenty-four of Chakraborty’s former trainees are now faculty members at various universities, in departments that include chemical engineering, mechanical engineering, physics, chemistry, and immunology. Chakraborty has also received five awards for classroom teaching, and he co-authored a recent book meant for a general audience called “Viruses, Pandemics, and Immunity.”

Chakraborty is a founding steering committee member of the Ragon Institute of MGH, MIT, and Harvard, whose mission is to harness the immune system to cure and prevent disease. He has served on the Defense Science Board of the U.S. Department of Defense since 2013, is a member of the board of governors of the Wellcome Trust, and serves on corporate scientific advisory boards and National Academy panels.

Being named an Institute Professor is the most meaningful recognition he has received, because it comes from his MIT colleagues, Chakraborty says.

“When I look at the list of past and present Institute Professors, I'm deeply humbled and I hope that I can live up to the trust that MIT has placed in me,” he says. “This recognition really belongs to my inspiring faculty colleagues, the students in my classrooms whose immense curiosity makes me a better teacher, and the students and postdocs in my research group who have taught me so much.”

Hammond, who is the David H. Koch Professor of Engineering and a member of the Koch Institute for Integrative Cancer Research, is renowned for her work developing polymers and nanomaterials for a variety of applications in drug delivery, noninvasive imaging, solar cells, and battery technology.

“Paula is a pioneer in nanotechnology research and has made substantial contributions to the science and engineering of macromolecular systems, with applications ranging from non-invasive imaging technologies for cancer diagnosis to sustainable solutions for battery technology,” Schmidt and Danheiser wrote in their announcement.

Early in her career, Hammond developed new techniques for building polymers with highly controlled architectures. This approach, known as layer-by-layer assembly, allows polymer layers with different properties to be laid down by alternately exposing a surface to positively and negatively charged particles.

Hammond has used layer-by-layer assembly to develop novel polymers for a variety of medical applications. Some of her polymer nanoparticles  zoom in on tumors and release their cargo when they enter the tumor’s acidic environment, and she has also developed nanoparticles and thin polymer films that can carry multiple drugs to a specific site and release the drugs in a controlled fashion.

In her energy-related work, she has developed polymer films that dramatically improve the efficiency of methanol fuel cells. She is also working on batteries and solar cells that self-assemble with the help of genetically engineered viruses.

After earning her bachelor’s degree from MIT, Hammond spent two years working as a process engineer. During that time, she also earned a master’s degree at Georgia Tech and decided that she wanted to return to academia. She was drawn back to MIT to study for a PhD in part because of the unique drive and enthusiasm she had seen in the students and faculty there.

“There’s a sense at MIT that almost anything can happen if you bring the right people together,” she says. “It has always been exciting to me to work with others who are equally enthusiastic and completely gung-ho about exploring new areas and new ideas, and also about impacting the world with their science.”

After finishing her PhD in polymer science and technology, she was a postdoc at Harvard University before joining MIT’s faculty in 1995. She has been a full professor since 2006.

In their announcement, Schmidt and Danheiser also cited Hammond’s commitment to mentoring future generations of chemical engineers. She has mentored more than 60 graduate students and 60 postdocs during her time as a professor, and has hosted more than 100 undergraduate researchers in her lab. As a reflection of her excellence in teaching and mentoring, Hammond was awarded the MIT Committed to Caring Award in 2017-18, the Henry Hill Lecturer Award in 2002, and the Junior Bose Faculty Award in 2000.

Hammond cited her own mentors at MIT as an inspiration for her devotion to her students.

“I had wonderful mentoring experiences myself when I was a graduate student, and experiencing those kinds of mentors inspired me to give that back to other students,” she says. “I want to be someone who is able to think up new ideas that get me really excited about science, and then to work with young people who are developing their careers to make those ideas real. Even more inspiring is watching them formulate their own ideas in the process, and ultimately seeing them launch their own careers.”

Hammond has also chaired or co-chaired two committees that contributed landmark reports on gender and race at MIT: the Initiative for Faculty Race and Diversity, and the Academic and Organizational Relationships Working Group. She is also a national leader outside of MIT, and has served on the U.S. Secretary of Energy Scientific Advisory Board, the NIH Center for Scientific Review Advisory Council, and the Board of Directors of the American Institute of Chemical Engineers.

In recognition of their achievements, both Hammond and Chakraborty have been elected to all three National Academies — Engineering, Science, and Medicine — making them two of only 25 people to hold that distinction.

“It’s a real honor to become an Institute Professor alongside Arup, who has always been such a universal contributor,” Hammond says. “I’ve always thought of this group as just amazing, incredible people because of the things that they’ve done. Each Institute Professor is at the cutting edge of their field and they’ve also done great things for MIT. When I look at the list of current and past Institute Professors, I am both extremely humbled and greatly inspired by their achievements and impact on MIT and the greater world. I’m very honored to be among this group.”