A primer on viruses, vaccines, and therapies

New book for the general public explains how novel viruses such as SARS-Cov-2 emerge and how we can fight them.
Anne Trafton | MIT News Office
Publication Date:
Press Inquiries 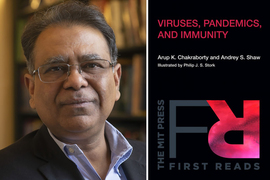 Caption:
MIT Professor Arup Chakraborty and Genentech scientist Andrey Shaw have written a book, “Viruses, Pandemics, and Immunity,” published by MIT Press, that provides an overview of viruses, how our immune system fights them, vaccines, and therapies.
Credits:
Photo courtesy of MIT ChemE

Since the novel coronavirus SARS-Cov-2 emerged late last year, it has been virtually impossible to consume any news without encountering stories about the virus and how it spreads, potential treatments, and the development of new vaccines.

This deluge of news can be overwhelming, especially for those who aren’t well-versed in virology or immunology. To help equip people to interpret the new information we learn about SARS-Cov-2 every day, Arup Chakraborty, the Robert T. Haslam Professor in Chemical Engineering at MIT, and Andrey Shaw at Genentech sat down early in the pandemic to write a slim book containing an overview of viruses and how they emerge to cause pandemics. The book also explains how our immune system fights viruses, the science of epidemiological models, and how vaccines and therapies work.

The resulting book, “Viruses, Pandemics, and Immunity,” provides important context for anyone who wants to better understand the complexities of the Covid-19 outbreak, as well as past and possible future pandemics, Chakraborty says. The book also provides an outline for creating a more pandemic-resilient world.

“People who read the book will now have a conceptual framework and facts to think about how viruses emerge to cause infectious diseases, how they spread, how we combat them naturally, and how we can combat them with vaccines and therapeutics,” says Chakraborty, who is also a professor of physics and of chemistry, a member of MIT’s Institute for Medical Engineering and Science, and a member of the Ragon Institute of MGH, MIT, and Harvard. “It will give them the framework that they need to debate and consider the current issues, and how we might build a more pandemic-resilient world.”

“It’s very difficult for the public to really get an understanding of the whole picture, and so that's what our attempt was here,” Shaw says. “We felt that it was important to lay out the scientific framework so that people could make their own decisions about what is going on.”

The book, which was illustrated by Philip J.S. Stork of Oregon Health and Science University, was published by the MIT Press as an ebook on Sept. 8 and will be published as a paperback in February.

Pandemics have played major roles in the course of human history, especially since humans began living together in closer quarters following the development of agriculture more than 10,000 years ago. Periodic outbreaks of bubonic plague, smallpox, yellow fever, influenza, and other infectious diseases have taken a huge toll on human populations.

During the 20th century, humankind made great strides against infectious disease, due to three major factors: improvements in sanitation, the discovery of antibiotics, and the development of vaccines against many deadly diseases. Because of those advances, many people, especially those living in developed countries, tended to think of major disease outbreaks as a thing of the past.

“This pandemic has reminded us that infectious diseases are an existential threat to humankind and have always been,” Chakraborty says.

As he and Shaw outline in their book, viruses, especially RNA viruses, are well-suited to cause pandemics. One reason for this is that RNA viruses are much more prone to make mistakes in copying their genetic material than DNA viruses are. This allows them to occasionally generate mutations that allow them to jump between species. The SARS-Cov-2 virus is believed to have done just that, likely jumping from bats to humans.

While humans have not previously encountered this particular virus, our immune system does have myriad defenses that can help fend off viral infection. These defenses fall into two main branches — innate and adaptive immunity.

The innate immune system is constantly on the lookout for foreign invaders. Upon encountering viral particles, it deploys a variety of cellular responses that can control the virus. The innate immune system also sends out a distress signal that attracts the specialized cells of the adaptive immune system. These cells, such as “killer T cells,” can launch a response tailored specifically for a particular virus or any pathogen. However, this response takes longer to develop. Once a pathogen has been vanquished, memory T cells, B cells, and antibodies specific to that pathogen continue to circulate, providing immunity to future infection.

While the human body has its own defenses against infection, these don’t always get the job done. Technological advances, especially vaccination, have proven to be a major weapon against infectious disease. The first modern vaccine, which was developed in 1796 to prevent smallpox, consisted of a virus called cowpox, which doesn’t harm humans but is similar enough to smallpox to provoke an immune response against the disease. The term vaccine comes from the Latin word “vaccinus,” meaning “of or from cows.”

One promising new type of subunit vaccine is RNA vaccines, which are made from RNA that encodes a viral protein. A major advantage of this type of vaccine is that they can be designed very quickly — one pharmaceutical company, Moderna, was able to start phase 1 clinical trials of an RNA vaccine against SARS-Cov-2 just over two months after the virus’ genetic sequence was published. That vaccine is now in phase 3 clinical trials, while dozens more, many based on other strategies, are also in development.

Because we don’t know yet which approaches will work the best for Covid-19, “it is wonderful that many vaccine ideas are being pursued in parallel,” the authors write in their chapter on vaccine development.

One factor that makes the authors optimistic about a SARS-Cov-2 vaccine is that the virus does not mutate rapidly, unlike other RNA viruses such as HIV and influenza. “It may not be so difficult to make a vaccine against it, especially with the extraordinary efforts people are putting into it,” Chakraborty says. He adds that the lessons learned from these intense efforts, and current research on vaccines against highly mutable pathogens, could lead to future advances that make possible vaccines against more difficult viruses such as HIV, which has no effective vaccine even after many decades of research, as well as vaccines against novel mutable viruses that may emerge in the future.

Antiviral drugs have also proven successful against some diseases, such as HIV and hepatitis C. These drugs can target many different stages of the viral life cycle. Some prevent viruses from binding to cell receptors that let them enter cells, while others, such as the reverse transcriptase inhibitors used to treat HIV, prevent the virus from replicating inside cells.

Because it takes so long to develop a new antiviral drug, scientists often try repurposing old drugs when a new virus emerges. Recently the U.S. Food and Drug Administration granted emergency-use authorization for remdesivir, a drug that is believed to interfere with viral replication, to treat Covid-19. Dexamethasone, a corticosteroid that helps reduce inflammation, has also been shown to improve symptoms in some patients.

“When Covid-19 first burst onto the scene, many physicians were really unprepared to treat this. But as the months have passed, we’ve become much more familiar with what’s going on, and we have a better idea how to treat these problems,” Shaw says.

In addition to offering the general public a better understanding of the scientific principles behind viruses, immunity, vaccines, therapies, and epidemiology, Chakraborty and Shaw hope to inspire young people to pursue careers related to those topics. They also hope that the book will help people in policymaking positions to gain a better understanding of the science behind pandemics, to aid them in making decisions that will help combat Covid-19 and potential future disease outbreaks.

“The authors provide a readily accessible introduction to viruses, a class of tiny human pathogens of surprising potential to cause transmissible, sometimes fatal, disease. They speak from a deep understanding of the viruses and the body’s response to viral infections. A great book for people who want to understand why viruses are such a challenge to human life,” says David Baltimore, president emeritus and professor of biology at Caltech, and winner of the 1975 Nobel Prize in Medicine.

Chakraborty and Shaw believe there are many ways to make the world more resilient to future pandemics, including improving early diagnostics, surveillance, and epidemiological modeling; creating more targeted approaches to the development of vaccines and antiviral drugs; making vaccine manufacturing more flexible; and making living spaces, workplaces, and hospitals safer. Success in these areas will require partnerships between government, the pharmaceutical industry and academia, with investments by the government to stimulate the necessary advances, the authors say.

“Informed by our history of battles with viruses, and the recent lessons learned from the Covid-19 pandemic, we need to create an integrated system of technologies that will help us prepare to respond more rapidly and effectively the next time, thereby saving millions of lives and trillions of dollars,” Chakraborty and Shaw write in the book’s epilogue. “A focused effort to create such a system will help us win the future by preparing for the ‘enemy’ before it arrives.”