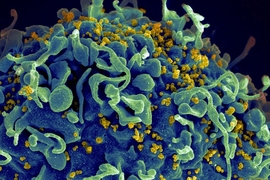 ↓ Download Image
Caption: This human T cell (blue) is under attack by HIV (yellow), the virus that causes AIDS. The virus specifically targets T cells, which play a critical role in the body's immune response against invaders like bacteria and viruses.
Credits: Courtesy of the National Institutes of Health

Caption:
This human T cell (blue) is under attack by HIV (yellow), the virus that causes AIDS. The virus specifically targets T cells, which play a critical role in the body's immune response against invaders like bacteria and viruses.
Credits:
Courtesy of the National Institutes of Health

Through an investigation of a fundamental process that guides the maturation of immune cells, researchers have revealed new insights into possible ways to vaccinate people to generate potent antibodies of the type that are predicted to offer protection against diverse strains of the highly mutable HIV.

The findings, described this week in the journal Cell, suggest that sequentially administering several different forms of a potential HIV vaccine could stimulate a stronger immune response than delivering a cocktail of these variants all at once. The study also sheds new light on a fundamental process of immune-cell development known as “affinity maturation.”

“Our work describes how affinity maturation works when there are variant strains of the virus to contend with, and why cross-reactive antibodies that can protect against diverse strains of the virus usually do not arise during natural infection. But it does offer hope that a properly designed vaccination scheme that can manipulate affinity maturation appropriately might be able to more efficiently produce such antibodies against the virus,” says Arup K. Chakraborty, the Robert T. Haslam Professor in Chemical Engineering and a professor of chemistry, physics, and biological engineering, director of MIT’s Institute for Medical Engineering and Science, and a member of the Ragon Institute of Massachusetts General Hospital, MIT, and Harvard University.

Such a vaccine, which has not yet been developed, would require sequential administration of a few variants of the HIV proteins that make up the spikes on the surface of the virus, which mutate frequently. This would help the immune system arm itself against a wide range of possible strains of the virus.

Other senior authors of the paper are Dane Wittrup, the Carbon P. Dubbs Professor in Chemical Engineering at MIT; Mehran Kardar, the Francis L. Friedman Professor of Physics at MIT; and Dennis R. Burton, a professor of immunology and microbial science at the Scripps Research Institute. The paper’s lead author is MIT postdoc Shenshen Wang, and other authors are former MIT graduate student Jordi Mata-Fink; recent MIT graduates Barry Kriegsman and Melissa Hanson; Darrell Irvine, an MIT professor of biological engineering and materials science and engineering; and the late Herman Eisen, a professor emeritus of biology.

Despite more than 30 years of intense effort, scientists have not yet come up with a reliably effective HIV vaccine — in part, because the virus mutates so frequently that it evades the body’s immune response. This challenge could be overcome with a vaccine that generates a population of B cells that produce antibodies that can target diverse mutant strains of specific viral proteins.

Such antibodies, known as “broadly neutralizing antibodies,” can arise in HIV-infected patients, but this rarely happens, and usually takes at least a couple of years — too long to offer any natural resistance to infection.

Antibodies, which detect foreign pathogens and alert the immune system to take action, develop through affinity maturation. The body has millions of antibody-producing B cells, each of which has receptors on its surface that target different pathogenic proteins, called antigens.

When a B cell receptor binds to an antigen, usually in the lymph nodes, it starts to reproduce itself; the resulting cells go through several rounds of mutation and re-exposure to the antigen. B cells that bind more strongly to the antigen survive each round of this selection. This affinity-maturation process ensures that the resulting B cell population, and the antibodies that they produce, will bind increasingly strongly to the invader as time ensues. However, because the HIV virus mutates so rapidly, HIV-specific antibodies eventually lose their effectiveness.

Their results suggested that sequential administration of different variants of an antigen — in this case, the protein “spike” that allows the virus to latch onto human T cells — offers the best hope for generating broadly neutralizing antibodies. This strategy allows the antibodies to gradually evolve to focus on the conserved elements shared by diverse HIV strains — elements that are essential for virus function. This approach was much more successful than exposing the cells to all the antigen variants at once.

Researchers in Wittrup’s lab then tested this prediction in model experiments with mice. “We developed a strategy for leading the immune system to focus on such a restricted site by exposing it to a programmed series of immunogens with variation at all the sites that we don’t want antibodies to bind to, while the desired target patch is kept constant throughout the series,” says Wittrup, who is the associate director of MIT’s Koch Institute for Integrative Cancer Research. Scientists had not yet been able to generate variants of the HIV protein spike, which consists of three proteins joined together, so they used four variants of a single protein that is part of the spike.

In mice that received all four variants at once, the resulting antibodies were different and responded to only some of the variants. However, in mice vaccinated sequentially, the antibodies generated by affinity maturation were focused on the target patch of conserved elements and were able to respond to all of the protein variants, just as the computer model predicted.

The researchers are careful to point out that their animal experiments did not generate broadly neutralizing antibodies — they only showed that it is possible to stimulate cross-reactive antibodies that react to multiple variants of a component of the protein spike. However, they are now working on developing variants of the full spike in hopes of testing them as vaccines.

“These modeling studies provide us with some very concrete suggestions as to the types of vaccine regimens that might work best to induce broadly neutralizing antibodies, which we think are key to protecting against HIV infection. We plan to test the models in nonhuman primates very soon,” Burton says.

“All attempts at HIV-1 vaccination have failed for the last 30 years. This new analysis of affinity maturation provides some important novel insights into how immune responses to complex antigens develop and clues about how one might go about to creating a vaccine in the future,” says Michel Nussenzweig, a professor of molecular immunology at Rockefeller University who was not involved in the research.

This approach may also be beneficial in developing vaccines against other viruses that mutate rapidly, such as the influenza virus, Chakraborty says. “Because this is a fundamental study, it is relevant to thinking about broadly neutralizing antibodies to other pathogens that are highly mutable,” he says.

The research was funded by the Ragon Institute, the International AIDS Vaccine Initiative, the National Institutes of Health, and the Scripps Center for HIV/AIDS Vaccine Immunology and Immunogen Discovery.

New insights into the mystery of natural HIV immunity