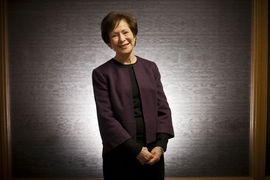 Berger is a lauded scholar who has published many studies of European politics and society, and who, in an overlapping phase of her career, has become an influential expert about the prospects of America’s innovation economy and advanced manufacturing.

“It is difficult to imagine anyone more deserving of the distinction of Institute Professor than Suzanne Berger,” says MIT President L. Rafael Reif. “Throughout her one-of-a-kind career, Suzanne has worked at the frontier of at least three distinct research areas and made influential contributions in every one. She stepped forward to inspire and lead groundbreaking research collaborations that brilliantly served both MIT and the nation. And — before we knew how much we needed it — she had the wisdom to invent the signature program that now leads MIT students into deep engagement with cultures around the world.”

In a letter sent to MIT faculty today, MIT Provost Martin A. Schmidt and MIT Chair of the Faculty Susan Silbey lauded Berger as an “internationally acclaimed scholar” and praised her work on numerous campus-wide MIT initiatives.

Berger’s central role in multiple MIT studies of the innovation economy and global business competition has “helped MIT in the realization of its mission to ‘serve the nation and the world,’” Schmidt and Silbey wrote. They added that Berger, as founding director of the MIT International Science and Technology Initiatives (MISTI), “has had a profound impact on generations of MIT students.”

MISTI sends hundreds of MIT students a year to internships in overseas labs and companies, and funds MIT faculty collaborations with researchers globally.

Nominations for faculty to be promoted to the rank of Institute Professor may be made at any time, by any member of the faculty, and should be directed to MIT’s Chair of the Faculty.

In a sense, Berger has almost packed two careers into her time at MIT. When Berger joined MIT in 1968, she was studying the political ideologies of French peasants, and she has published multiple books and articles about French and European society and politics, including “Peasants Against Politics,” (1972), “The French Political System,” (1974), and “Dualism and Discontinuity in Industrial Societies,” (1980), the latter co-authored with Michael Piore.

Additionally, starting in the 1980s, Berger became a key figure in several MIT-wide study projects, a branching interest that Berger credits in part to the broad-ranging research environment at MIT.

“MIT really changed me,” Berger says. “I’ve learned a lot at MIT. What an extraordinary place to be constantly learning, and rethinking your basic assumptions about how the world works.”

Berger adds that she is “deeply honored” to be named an Institute Professor, and noted that outside of MIT, “many people do not understand that we have extraordinary departments in economics, political science, linguistics, philosophy, and more. So on behalf of those of us on social sciences, I feel this is recognition of the role social scientists play, both in research and in the education of our students.”

As Berger also notes, her career is also marked by both her own individual research, and her participation in Institute initiatives, some of which have been highly influential in shaping public discourse.

“Over all my years at MIT, I’ve come to see that Institute Professors are people who both have worked in their own fields and made contributions to the Institute,” Berger says.

That certainly is true in her case. In 1986, Berger was named to MIT’s Commission on Industrial Productivity, which conducted an intensive multiyear study of U.S. industry. That resulted in the widely read book “Made in America” and spurred MIT to found its Industrial Performance Center.

For Berger’s part, serving on the commission also spurred her to play a central role in subsequent Institute-wide projects. That included studies of Hong Kong and Taiwan, for which she and Richard Lester, now associate provost at MIT overseeing international activities, co-edited the books “Made By Hong Kong” (1997) and “Global Taiwan” (2005).

More recently, Berger was a key part of a five-year Institute global study of manufacturing that resulted in a 2006 book she authored, “How We Compete.” The book evaluated the strategies of multinational companies, examining when they outsource tasks to other firms and under what circumstances they move their own operations overseas.

Berger followed that up by co-chairing MIT’s commission on Production in the Innovation Economy, formed in 2010, which took a deep look at the state of advanced manufacturing in the U.S., providing important input for federal policy in this area. Berger was also lead author of a 2013 book written with the other commission members, “Making in America,” summarizing the group’s findings.

Currently Berger’s work is continuing along two tracks. She is a member of MIT’s “Work of the Future” task force, which is studying the condition of labor in the U.S., and working to complete a book project of her own, on the wave of globalization that occurred in the late 19th century.

Berger received her undergraduate degree from the University of Chicago and her PhD from Harvard University in 1967. She joined the MIT faculty in 1968 and has been at the Institute ever since.

Berger has received many other honors in her career. She was made a Chevalier de la Légion d’Honneur by France in 2009. She has also been awarded a Guggenheim fellowship, and been named a fellow of the American Academy of Arts and Sciences.