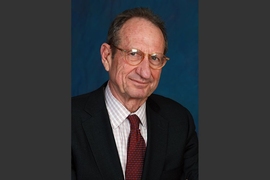 Institute Professor Emeritus John M. Deutch ’61, PhD ’65 has made a generous endowment gift to name an MIT Institute Professorship. This appointment — the highest honor awarded by MIT’s faculty and administration — recognizes faculty members who have “demonstrated exceptional distinction by a combination of leadership, accomplishment, and service in the scholarly, educational, and general intellectual life of the Institute or wider academic community.”  Currently, MIT has 10 active and 12 emeritus Institute Professors.

Deutch says his motivation for making the gift was his “great respect for MIT and for the tremendous professional and personal satisfaction I have enjoyed as a member of the MIT community for over 59 years.”

Deutch has earned distinction across a career spanning academia and government — including service on the chemistry faculties at Princeton University and MIT, in the MIT administration, and in the administrations of four U.S. presidents.

“It’s rare for anyone to possess the intellectual intensity, managerial rigor, and strategic vision to excel in scholarship, in academic leadership, and in national service; John Deutch is that rare individual,” says MIT President L. Rafael Reif. “Institute Professors are the keepers of the flame at MIT — those faculty members who in the eyes of their colleagues embody MIT’s highest ideals of scholarly achievement and service to the Institute and society. I find it wonderfully fitting that John has chosen to endow an Institute Professorship — an inspired act of creative citizenship.”

Deutch’s relationship with MIT began when he entered the three-two program in 1959. He holds a BA from Amherst College in history and economics and a BS in chemical engineering from MIT, awarded in 1961, as well as a PhD in physical chemistry from MIT, awarded in 1965. In 1966, after a year as a postdoc at the National Bureau of Standards, he joined the chemistry faculty at Princeton.

In 1970, Deutch returned to MIT to join the chemistry faculty, eventually serving as chair of the department from 1976 to 1977, dean of the School of Science from 1982 to 1985, and provost from 1985 to 1990. He was appointed an MIT Institute Professor in 1990, and in 2009 he received MIT’s Gordon Y Billard award “for special service of outstanding merit performed for the Institute.”

He has served on many presidential and congressional commissions and advisory committees for government agencies and received numerous public service awards.

Deutch has been a board member and advisor to numerous corporations and a director or trustee of nonprofit organizations, including the Center for American Progress; the Council on Foreign Relations; Resources for the Future; Massachusetts General Hospital’s Physicians Organization; the Museum of Fine Arts, Boston; the Skolkovo Institute of Science and Technology; the Urban Institute; and Wellesley College.

Deutch was elected to the American Philosophical Society in 2007, and he delivered the 2010 Harvard University Godkin Lectures on the Essentials of Free Government and the Duties of the Citizen.