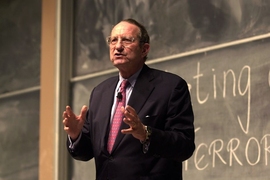 MIT Institute Professor John Deutch, who has been on the MIT faculty since 1970, has served as a department head, dean of the School of Science, and provost, and has published over 160 technical publications as well as numerous publications on technology, energy, international security, and public policy issues. He served in the U.S. government as director of central intelligence from 1995 to 1996, as deputy secretary of defense from 1994 to 1995, and in other posts in the departments of Defense and Energy. He is a member of the nonpartisan Aspen Strategy Group, which is composed of current and former policymakers, academics, journalists, and business leaders whose aim is to explore foreign policy and national security challenges facing the United States. The group has just released its annual report, and it includes a chapter co-written by Deutch and former U.S. Secretary of State Condoleezza Rice, about how the U.S. should deal with the risk of losing important intellectual property rights regarding technological innovations, in the face of efforts by China to acquire such technology through underhanded means. MIT News asked Deutch to describe the potential risks and remedies for such actions that he and Rice outlined in their report.

Q: What was the challenge that you and Prof. Rice, now at Stanford Business School, were asked to address in this piece, and what conclusions did you reach?

A: This year the subject [of the Aspen Strategy Group’s annual report] was the future challenges we see for policy. There was a lot of talk about China and what its relationship with the United States is likely to be, and in the course of this there was a lot of discussion about national security and the tremendous emphasis in China's new five-year plan on technology, in key areas such as robotics, artificial intelligence, and machine learning. There also was a great deal of discussion about nefarious activities by some in China, including trying to get certain Chinese nationals who live here to provide information to the Chinese government to help them acquire this advanced technology. As a result of that, there's been a hint of a new set of proposals from some elements of the natonal security community to, first, control information in the United States from leaving the country, and, second, restrict Chinese nationals from participating in certain kinds of research projects. Condi and I decided to write a short piece about the danger of these proposals.

Basically our view was, yes, the Chinese are putting a greater emphasis on technology; they are growing very fast and they're increasingly competent, and so we should expect greater competition. And yes, they are performing illegal acts against the U.S., especially theft of intellectual property. The U.S. should do everything it can to push back on that effort and prevent it if possible. But the idea that we should respond to this threat by either restricting access to U.S. universities or keeping our ideas in the United States is completely wrong. We'll lose the tremendous advantage we have of an open university system if we do that. The only answer is for U.S. universities to do even more in pursuing their great record of being innovative and creative.

Q: Do you think it's possible to maintain academic freedom of information in the context of dealing with people who may not share our commitment to protecting intellectual property?

A: In such a situation, we need to recognize that we will have some losses. But there will be more severe effects on our innovative enterprise, which is the best in the world, if we start trying to stop these losses by applying restrictions. Universities aren't very good, first of all, at assessing the nature of the risk [of intellectual-property loss] and, second, at deciding what restrictive measures should be put in place. So, both my co-author Condi and I believe, keep the system open. Recognize that you will have some losses, but do what you do well.

Universities should make sure that our scholarly efforts and our educational efforts permit advances in key areas where fundamental research and practical application come together, in health, energy, and environment, including an emphasis on innovation. And we see that happening. By the way, much as the Chinese universities are improving, they do not have the kind of ecosystem that is so strong here, in terms of promoting innovation, creativity, and getting important things implemented in the private sector.

Q:  So are there specific measures that universities should be taking to address these efforts to exploit U.S. innovations, or is your advice that they should avoid taking any special measures?

A: My answer is no, there are not specific measures they should take, but it is very important that the administrative leadership of the university understands the concerns in Washington, appreciates the risks, and doesn’t enter into joint projects that could really lead to a loss of sensitive technology.

The universities should try and explain to the government that we think the proper response here is better performance by U.S. universities, rather than trying to keep people out or keep our ideas in.

I think one should expect that the technical competence of China will continue to improve, because of the capabilities of its people and the significant amount of resources the Chinese are putting into technology leadership in a variety of fields. We should expect that. How much of an advantage is given to China by their quite sustained illegal efforts to acquire technology from both the United States and Europe? I think it is helpful but by no means the most important or the determining factor in their advance.

This short piece with Condi Rice is not so much directed to U.S. universities; rather it is directed to the government and the national security community, to say to them, be cautious here — don't throw the baby out with the bathwater.

A life of research and service