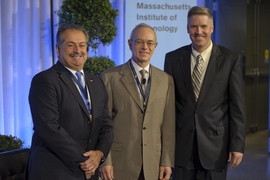 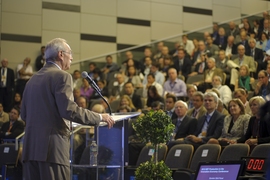 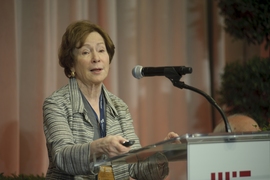 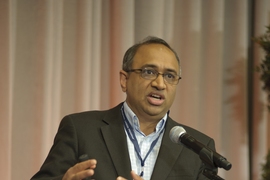 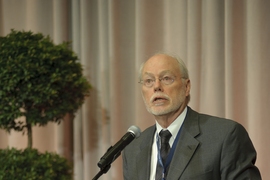 Caption:
2013 MIT Production in the Innovation Economy Conference
Credits:
Photo: David Sella
The U.S. economy retains myriad sources of innovative capacity — but not enough of the innovations occurring in America today reach the marketplace, according to a major two-year MIT study presented at an Institute conference on Friday.

The report, by MIT’s commission on Production in the Innovation Economy (PIE), found that potentially valuable innovations occur throughout the advanced manufacturing sector — from academic labs to shop floors — and in companies of all sizes, from multinational conglomerates to specialized “Main Street” firms.

However, there are still holes in the “ecosystem” of advanced manufacturing in the United States — gaps that particularly inhibit innovative smaller firms. The PIE commission suggests that new policies, partnerships and programs can help create innovation-based growth and jobs.

“If we want to stay strong in innovation, we must regain our strength in manufacturing,” MIT President L. Rafael Reif said in his introductory remarks at the event.

At the event, Reif also announced his interest in creating an Institute-wide initiative on innovation, intended to strengthen MIT’s ability to move ideas to real impact. Reif noted that MIT will also continue to conduct research on innovation, and will engage with the government on activities like the White House’s Advanced Manufacturing Partnership (AMP), a federal effort to strengthen domestic manufacturing.

“Not too long ago … this was a dead subject,” Andrew Liveris, the president, chairman and CEO of Dow Chemical, and co-chair of AMP’s steering committee, said in his remarks on Friday. Still, Liveris noted, sustaining manufacturing’s revival will require deep collaboration among stakeholders.

“We can expand it and take it from here as a matter of choice,” Liveris said.

The MIT conference featured about 50 speakers from industry, government and academia, who detailed the promise of advanced manufacturing, as well as its challenges.

President Barack Obama “has emphasized since day one that the [emergence] of economic growth lies in our ability to be creative,” said Patrick Gallagher, the acting deputy secretary of commerce and head of the National Institute of Standards and Technology.

“I think we’ve moved from a state that was inclined to write off manufacturing in the past to a consensus that it should be a part of our future,” said Gregory Bialecki, secretary of housing and economic development in Massachusetts, which has backed a variety of recent measures to enhance innovative production.

Today’s holes in the industrial ecosystem

The PIE commission consisted of 21 MIT faculty members, and an associated group of researchers, who studied advanced manufacturing firms in the United States, Germany and China, collecting data and conducting hundreds of interviews with industry leaders. PIE was co-chaired by Suzanne Berger, the Raphael Dorman-Helen Starbuck Professor of Political Science at MIT, and Institute Professor Phillip Sharp, of the Department of Biology and the Koch Institute for Integrative Cancer Research.

Many of its results are detailed in a new book written by Berger, "Making in America," published this month by MIT Press. In her remarks on Friday, Berger emphasized the major long-term shifts in U.S. manufacturing in recent decades; job losses in the sector, she noted, cannot strictly be blamed on low-wage competition from foreign factories.

“We think the most important factor in trying to understand what happened to American manufacturing is the transformation of corporate structures from the 1980s on,” Berger said. Whereas innovation had long been the domain of a few dozen U.S. firms with large, in-house research and development operations, she said, that changed in response to changing shareholder demands on those companies.

“U.S. financial markets demanded that companies become asset-light,” Berger said; as a result, many large firms reduced their research and manufacturing arms. “There’s been much that’s been good about this change, but there have also been losses,” she added. Today’s “far more fragmented economy” means innovation breakthroughs can come from a greater diversity of places — but may also be harder to turn into valuable products.

For that reason, the PIE commission recommends a variety of private-public partnerships and industry-university collaborations that can help create centers for innovation across the country.

The PIE commission also examined 150 startup firms based on technologies developed in MIT’s own labs. As Elizabeth Reynolds, executive director of the MIT Industrial Performance Center, detailed in a presentation, about 60 percent of those were in biotechnology, where new firms often engage in a process of “learning by building” over two to three years of scaling up production. Such firms can require $30 million to $60 million in capital, an amount far exceeding what most software startups would require.

“Venture capital is a wonderful tool for some things, and not a good fit for others,” Steven Taub, senior investment director for the energy group of GE Ventures, said at one of two afternoon panels devoted to the problem of funding.

This problem has also driven state-level investments encouraging research and development, Bielecki noted. The state, he acknowledged, is “never going to be the dominant provider of capital,” and never intends to play favorites: “We don’t pick winners and losers.” Still, Bielecki added, “Having companies grow to scale here in Massachusetts is very important to us.”

Friday’s conference also highlighted ideas about the future of manufacturing beyond its traditional trajectory. PIE commission member Sanjay Sarma, the Fred Fort Flowers and Daniel Fort Flowers Professor of Mechanical Engineering and director of MIT’s Office of Digital Learning, presented on what he called “distributed virtual factories.” In one such scenario, smaller-scale manufacturers could bid on jobs, use designs sent online, and produce goods locally, possibly leading to more efficient, greener supply chains.

Further developing this approach will help form one of the four parts of MIT’s innovation initiative, Reif said. A second element would be research that advances policy; Reif pledged to use the unique “convening power of MIT” to generate public discussion of the subject.

A third facet of the initiative will concern education: Reif said MIT will use its online capacities to develop courseware aimed at developing skill in innovation. He added that MIT would continue to enhance its existing graduate coursework, including its programs in innovation, manufacturing and operations, to further “build on the strengths of our graduate degrees.”

The fourth plank consisted of what Reif termed an effort for MIT to “walk the talk” and put its ideas into practice. Overall, Reif said, the innovation initiative would be “a serious effort, and I believe it will make an important difference” in the innovation economy.

As Olivier de Weck, PIE’s executive director, noted in a presentation, other active areas of MIT research relating to advanced manufacturing include the nanoengineering of materials and surfaces; additive precision manufacturing (such as 3-D printing); robotics; next-generation electronics; biomanufacturing; and green manufacturing.

Working with the workforce

As part of their work, PIE commission members also dug into the issues of job skills and worker training, conducting a survey of about 1,000 manufacturers, community colleges, high schools and labor-market programs. Only 20 percent of firms reported long-lasting vacancies they could not fill, equivalent to about 5 percent of core production jobs. Just 7 percent of respondents thought the skills needed had risen markedly in the last five years.

“You do need skills,” said PIE commission member Paul Osterman, a professor at the MIT Sloan School of Management, “but they are within reach of most Americans.”

Moreover, Osterman noted, there is a widespread need among manufacturers for production workers who can simply digest one-page memos and effectively turn instructions into action.

To help provide more specific technical skills, Sarma and MIT announced a new online-education initiative, in partnership with community colleges, that will help disseminate MIT-based know-how to other institutions.

“Strong manufacturing does not require low-wage labor,” Berger said, citing the example of Germany, where the manufacturing sector represents a bigger percentage of GDP than in the United States, and where manufacturing wages are higher, too.

“There doesn’t seem to be anything inexorable or natural about the rundown of our manufacturing economy,” Berger added, summing up the PIE commission’s outlook: “There is a great deal of optimism in our group.”