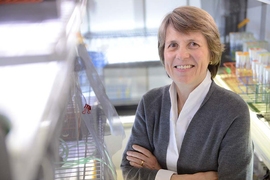 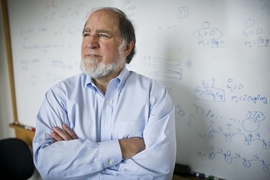 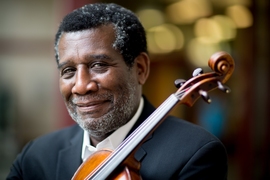 A marine biologist who studies tiny ocean organisms, a computer scientist who developed a global security standard, and an acclaimed violist who has performed with renowned orchestras have been awarded MIT’s highest faculty honor: the title of Institute Professor.

MIT President L. Rafael Reif says, “Although our new Institute Professors were chosen as individuals, it is interesting to consider them together: Penny Chisholm, a pioneering field scientist whose discoveries revolutionized our understanding of the oceans; Ron Rivest, a brilliant theorist and problem-solver who ranks as one of the founding fathers of modern cryptography; and Marcus Thompson, among the most celebrated string performers in the United States today.

“Their fields could not be more different,” Reif says. “Yet each is an explorer, creator, and teacher of the first order. Together they reflect the standard of faculty excellence that is a signature of MIT.”

The appointments of Chisholm, Rivest, and Thompson as Institute Professors were announced today in an email to the faculty from Provost Martin Schmidt and Steven Hall, chair of the MIT faculty and a professor of aeronautics and astronautics.

“This special position is a unique honor bestowed by the Faculty and Administration of MIT,” Schmidt and Hall wrote. “Such appointments recognize exceptional distinction by a combination of leadership, accomplishment, and service in the scholarly, educational, and general intellectual life of the Institute and wider community.”

The world’s oceans are filled with a tiny bacterium, Prochlorococcus, that produces about 10 percent of the world’s oxygen — making this tiny creature fundamental to life on Earth.

No one knows more about Prochlorococcus than MIT biologist Sallie “Penny” Chisholm, who has been the Lee and Geraldine Martin Professor in Environmental Studies at MIT since 2002. Indeed, she was a co-discoverer of Prochlorococcus in the 1980s, and has been heavily focused on it ever since, publishing a series of findings detailing how Prochlorococcus interacts with other creatures and influences the environment on a planetary scale — work that seems increasingly significant at a time when climate change may be altering the world’s oceans.

Being named an Institute Professor “was really a total surprise and not something I had ever, ever considered,” Chisholm says. She is quick to emphasize the collaborative nature of her research, and credits colleagues and students for propelling her own research forward.

Beyond that, Chisholm quips, “I have two things to thank: MIT and Prochlorococcus.”

Chisholm grew up in Marquette, Michigan. After receiving her BA in biology from Skidmore College and her PhD in biology from the State University of New York at Albany, she arrived at MIT in 1976 as a marine ecologist studying microorganisms in MIT’s Department of Civil and Environmental Engineering. She soon found it to be a productive setting.

“My career has been shaped by MIT,” Chisholm says. “The combination of science and engineering has been very powerful for my work. In my lab, we’ve always been able to mix the two together. There’s a continuum. Mix them together and watch people interact, and the combination is so much more powerful.”

And while Chisholm’s research had produced significant advances by the 1990s, the advent of large-scale genomics created a new window into the evolution of Prochlorococcus, helping her lab to link the evolutionary, ecological, and molecular aspects of these microorganisms.

“A major change happened about 15 years ago, when genomics entered marine biology,” Chisholm says. “And we were lucky enough to be on the forefront of that. … It’s completely changed the way I think about oceans and ecology and the field. It keeps getting more and more exciting.”

Chisholm says that being named an Institute Professor “is not just about me, but my field, recognizing what I do and my students do as being something of value. That makes me as happy as the honor itself.”

“Penny not only made a paradigm-shifting discovery in the study of oceans, but went on to pioneer a new field,” Hall says. “She’s applied her research to inform the debate about global warming in meaningful ways, and her successes have drawn many younger faculty to MIT.”

You are most likely reading this on a computer, so the odds are high that at some point — perhaps even within the last few minutes — you have benefitted from Ron Rivest’s landmark advances in computer security. In 1977, with colleagues Adi Shamir and Leonard Adleman, Rivest devised what quickly became known as the RSA public-key cryptosystem, which secures communications between computers using products of large prime numbers. The system has proven durable and remained unbroken.

That is just one part of a distinguished career that has seen Rivest conduct research in cryptography, other aspects of computer and network security, algorithms, machine learning, and even voting technology. He has also taught well-received classes in all those fields, and co-authored a best-selling textbook, “Introduction to Algorithms,” that has been used by hundreds of thousands of students.

“I was stunned to receive this recognition,” Rivest says. “I had no inkling that this was coming. It is a tremendous honor to be named an Institute Professor. Thank you, MIT!”

Born and raised in Niskayuna, New York, Rivest received his undergraduate degree in mathematics from Yale University and a PhD in computer science at Stanford University before joining MIT — which is where he worked out the RSA idea, along with Shamir and Adleman. Rivest was named the Vannevar Bush Professor in the Department of Electrical Engineering and Computer Science in 2013.

Among many global honors, Rivest received the Turing Award, the highest honor in computer science, in 2002. In 2010, Rivest was given MIT’s James R. Killian Jr. Faculty Achievement Award; his award citation called the RSA code a “wonderful example of elegant and abstract theory eventually having immense practical impact.”

“I do hope this recognition, and the work I do, will help to inspire further advances in cryptography and computer security,” Rivest says. “MIT is a wonderful place to work, and has the rich array of talent needed to make such advances. I have been very pleased to see MIT increasing its efforts in these directions recently.”

In addition to his research and teaching, Rivest has founded companies including RSA Security and VeriSign. He has also been an active participant in the Caltech/MIT Voting Technology Project, for which he has worked on systems aimed at confirming to voters that their votes have been correctly recorded and tallied, while still ensuring privacy for their ballot-box choices.

“Both on campus and nationally, Ron is sought out for his wisdom on challenging problems,” Hall says. “He’s a tremendous scholar and innovator, and his continuing contributions to issues like secure voting reflect the best traditions of MIT.”

A native of Bronx, New York, Marcus Thompson has been an influential presence at MIT for over four decades, as both an internationally recognized concert musician and a lauded instructor. He began playing the violin at age 6, switched to the viola at age 17, and had embarked on an active concert career by age 22. Thompson arrived at MIT as an assistant professor of music in 1973, and was named the Robert R. Taylor Professor of Music in 1995 — the same year he was named a Margaret MacVicar Faculty Fellow for exceptional teaching.

Thompson’s violin studies began at a private neighborhood studio, and continued in the Juilliard Pre-College Division with the noted instructor Louise Behrend. Following nearly a decade of study with violist Walter Trampler, Thompson received Juilliard’s first doctoral degree in viola performance. He studied chamber music with members of the Juilliard, Amadeus, and Netherlands string quartets, and with Joseph Gingold and Felix Galimir.

Thompson first earned public attention as a solo and chamber music player following an acclaimed recital debut at New York’s Carnegie Hall in the Young Concert Artists Series, along with other appearances in New York and Boston.

Since then, Thompson has performed as a soloist with many of the most prominent orchestras in the U.S. He has recorded with orchestras in Ljubljana, Slovenia, and in Prague, and performed premieres of works by MIT colleagues, including the West Coast premiere of “Viola Concerto,” by John Harbison, with the Los Angeles Chamber Orchestra; next season he will premiere a new work by MIT composer Elena Ruehr with the New Orchestra of Washington.

A respected chamber musician, Thompson has appeared regularly at chamber music festivals and series on three continents, and frequently collaborated with groups including the Emerson, Jupiter, Borromeo, Muir, Calder, and Shanghai string quartets. He has served as artistic director of the Boston Chamber Music Society since 2009, where he has been hailed for innovative programming and artistic leadership.

At MIT, Thompson has developed programs for the study and performance of solo repertoire and chamber music literature from five centuries. As a member of the viola faculty at the New England Conservatory of Music since 1983, Thompson has taught aspiring professionals who now hold positions in orchestras, chamber ensembles, and universities worldwide.

“My initial reaction was that I was shocked, stunned, amazed,” Thompson says of learning of his appointment as an Institute Professor. “I’m also extremely grateful and humbled by the recognition not just of me, but the fact that there is music at MIT, and high-quality music. It’s a privilege to be at MIT, and to be recognized is just an honor.”

For Thompson, teaching is a reward in itself. He says he feels proudest witnessing the musical activity of former students, and he feels a special pride in meeting the younger siblings or children of former students who themselves play in MIT’s many ensembles.

“For so many students,” Thompson says, “the serious study of music is an integral part of Institute life, and often remains their most cherished memory of how we care for them. I see and hear music, fine music, great music-making, all over the Institute. Our students are very drawn to it, they’re very good at it, and it becomes part of their lifelong learning.”

“Over his long career, Marcus has worked to give students access to a world-class music program that has changed MIT,” Hall says. “Many colleagues told us about his commitment to and generosity with students. Like Penny and Ron, Marcus is one of the great men and women of our faculty who inspire us every day.”

In an article for Next Avenue that highlights scientists over age 65 who are making “enormous contributions to their fields of expertise,” Diane Estabrook features Prof. Sallie “Penny” Chisholm and her research investigating Prochlorococcus. “The earth operates on solar energy, so understanding Prochlorococcus’ design could help us design artificial photosynthetic machines,” says Chisholm.

Full story via Next Avenue →

Boston Magazine reporter Paul Albani-Burgio speaks with two of MIT’s newest Institute Professors, Sally “Penny” Chisholm and Marcus Thompson. Chisholm says that one of the most rewarding aspects of her job is working with MIT students. “They’re just a constant source of renewal and excitement,” she explains.