A searching discussion about being Asian American at MIT 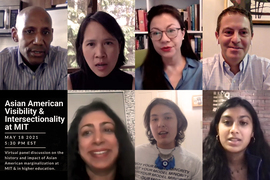 A broad-ranging panel discussion on May 18 examined the complexities of Asian American and Pacific Islander identity and acceptance at MIT, while underscoring the need for collaborative work among groups to combat prejudice and create equity.

The online forum was held amid an ongoing string of violent assaults on Asian Americans in the U.S., which has raised public awareness about anti-Asian discrimination. But the forum — featuring faculty, students, and staff — made clear that anti-Asian American violence, stereotyping, and exclusion have long histories in the U.S.

Indeed, the event’s first segment, featuring presentations from three MIT faculty members, emphasized the importance of situating Asian American and Pacific Islander struggles in the context of systemic bias against many groups. That is both a better reading of history, the speakers suggested, and a more promising platform for allyship in activism.

“Sometimes it’s confusing for Asian Americans/AAPI to know where we belong,” said Emma Teng, a historian and the T.T. and Wei Fong Chao Professor of Asian Civilizations. “Sometimes we’re visible as minorities, and sometimes we’re not visible. … And that can lead to a lot of misunderstandings and lost opportunities for solidarity.”

The dangers of the “model minority” myth

Teng, author of the book, “Eurasian: Mixed Identities in the United States, China, and Hong Kong, 1842-1943,” focused her remarks on the dangers of the “model minority” myth — the idea that Asian Americans are a uniquely high-achieving and assimilated ethnic group. That idea, Teng observed, fails to account for the socioeconomic and cultural diversity of Asian Americans, and harms many ethnic groups, including Asian Americans and Pacific Islanders.

For one thing, the model minority myth can form a standard against which negative judgments of other minority groups are constructed. The concept also reduces attention to anti-Asian discrimination, Teng added, while at MIT the idea can burden students with “imposter syndrome” — a sense of not being worthy — and put undue pressure on them.

“I’ve heard students label themselves to me as a ‘bad Asian’ if they’re not breezing through all their classes,” Teng said. “Whereas in reality we all know that being an MIT student is enormously challenging for everybody, regardless of your background.”

Finally, Teng noted, the model minority myth contributes to the so-called “bamboo ceiling” in institutions, limiting opportunities for Asian Americans by linking them to qualities such as technical skills that are not associated with leadership.

“The ‘bamboo ceiling’ can, I think, be seen in many different kinds of contexts, where Asians are recognized as competent, intelligent, and high-achieving, but not possessing the social or leadership skills to be put in high leadership positions,” Teng said.

Lily Tsai, the Ford Professor of Political Science and faculty chair-elect at the Institute, also suggested that notions of Asian American exceptionalism are problematic.

“There are these myths that focus on the internal and cultural sources of success, for Asian Americans as a model minority,” Tsai said, noting that such narratives “really shift attention away from external structural sources” of disadvantage for all people of color.

Asian Americans, Tsai added, “really need to fight the myth” that, as political scientist Claire Jean Kim has put it, “no amount of externally imposed hardship can keep a good minority down.” Focusing on Asian American achievement, in this sense, can both lead people to minimize the barriers to success facing all minority groups, and heighten an unjustified sense of difference among groups.

Tsai also suggested that “racial triangulation theory,” developed by Kim, a professor at the University of California at Irvine, is a helpful framework for understanding how the dynamics of stereotyping can work. Among three groups — whites, Blacks, and Asian Americans — people may cast whites and Asian Americans as being successful, thus marginalizing Blacks; at the same time, people may view whites and Blacks as “insiders” in America, with Asian Americans being cast as “perpetual foreigners.”

“It enables us to see how Asian Americans can be used as a wedge between whites and Blacks, and how there can be challenges to Asian American and Black solidarity,” Tsai said.

In his remarks, Craig Wilder, the Barton L. Weller Professor of History, emphasized the long history of violence against Asian Americans, dating to the 1800s.

“Going back to the 19th century, those campaigns of violence get so normalized in American history and so easily erased,” Wilder said, adding that in the U.S. there is a “cyclical rediscovery of American violence. We pretend somehow that we’ve forgotten that we have this deep, long history of violence.”

Wilder, author of the book “Ebony and Ivy: Race, Slavery, and the Troubled History of America’s Universities,” about many universities’ deep ties to slavery, emphasized that academics have long been involved in acts of exclusion toward minority groups.

“American intellectuals from the 1820s … were central to providing a kind of intellectual and academic justification for campaigns of various communities against people of color, and campaigns against other religious groups,” said Wilder. Showing a picture of eugenicist Francis Galton, he added that “our institutions were in fact never innocent actors sitting in the backdrop of history.”

However, Wilder added, at MIT today, “We have a moment where we have to really think about how we hold ourselves accountable, and how these institutions today need not just to repair that past, but also to envision a future that’s far more democratic, far more inclusive, and far less divided.”

The event, “Asian American Visibility and Intersectionality at MIT,” was introduced by Beatriz Cantada, director of engagement for diversity and inclusion in MIT’s Institute Community and Equity Office. The discussion was moderated by Christopher Capozzola, head of the MIT History section.

After the initial faculty presentations, the event featured a discussion among the faculty and three other participants, acting as interlocutors and commentators: Eesha Banerjee, a first-year student majoring in electrical engineering and computer science; Amelia Lee Dogan, a sophomore majoring in urban studies and planning with computer science and in American studies; and Rupinder Grewal, a conflict of interest officer in the Office of the Vice President for Research, and the lead for the Asian Pacific American Employee Resource Group at MIT.

Grewal queried Teng, for instance, about what approaches might help remove the “bamboo ceiling” from workplaces.

“What do we do about that?” Grewal asked. “How do we change the narrative? Where does the responsibility lie?”

Teng noted that research indicates Asian Americans incur a “penalty” in workplace terms when they act more assertively: “They’re expected to be competent, to be somewhat passive, and also to have a caretaking role for others. It’s not a simple solution by saying … ‘I’m an Asian American woman and I’m going to be assertive now.’” That said, she observed that Tsai herself had just broken through the bamboo ceiling, as the first Asian American woman and first person of East Asian descent to be elected chair of the MIT faculty.

A significant part of the discussion focused on solidarity among different interest groups. Banerjee, for one, asked the panel to comment on “the role of members of the Asian American community who might have more privilege socioeconomically, or in terms of representation, [in creating] Asian solidarity and centering the needs of other groups.”

Tsai, in reply, suggested that kind of support is crucial to effective political alliances. Some research, she noted, suggests that “all of us are best at advocating for groups that we are not a member of. I often think about that, because I want to be able to use my influence and political capital as effectively as possible. ... When you advocate on behalf of a group you are seen to be a member of, it is discredited, because it is seen as self-interest.”

As Teng suggested, however, there can be benefits to “disaggregating” the Asian American and Pacific Islander experience, and better understanding the trajectories of some students in relation to their particular ethnicities. Sometimes, she said, “I think we need to understand each group one by one, to understand the socioeconomic profile of the group.”

At the same time, Dogan noted, a willingness to engage in pan-Asian organizing may also reflect the political orientation of the participants: Some people may more readily view different subgroups of Asian Americans as being linked in a common effort, while others may be more particularist.

“I think there are a lot of struggles toward pan-Asian advocacy, and that’s a very deep conversation [regarding being] Asian American as a political identity versus an ethnic identity, and how we internally have our own struggles and regional conflicts,” Dogan said. “There are Asian Americans working toward that right now.”

“Imagine a world that can be different”

Banerjee and Wilder both observed that universities, imperfect though they may be, do offer unusual opportunities for dialogue, action, and progress.

“At MIT, solidarity is something we still do need to work toward,” Banerjee said. And yet, she noted, it does exist to an extent. As a result, one question is how students and others can move multiethnic organizing and awareness from campuses to the cities and towns around them: “The solidarity we build up here on the university level, how can that be translated, either in the Cambridge community or back home?”

For his part, Wilder noted, “One of the things that college campuses allow us to do is to imagine a world that can be different, [along with] using the skill sets that you learn on campus and taking them elsewhere.”

Certainly, Wilder added, “College campuses have a lot of housecleaning to do. We’re not, in fact, racially uncomplicated spaces. We actually have all of the same burdens that the greater society has. One of the things that we do have that’s different is the luxury of stepping back to think about how to wrestle with [existing] tensions. To recognize that they’re not easily solved.”

3 Questions: Emma Teng on anti-Asian American violence in the US