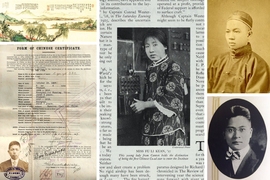 Today MIT has extensive ties to China, but few people know how old those ties really are. The first Chinese student at MIT arrived on campus in 1877, and roughly 400 students from China matriculated at the Institute over the next half-century. Among other accomplishments, Chinese graduates of MIT helped pioneer early aircraft at Boeing and advanced research in areas including microwave spectroscopy and nonlinear control theory. Chinese students at MIT also starred in collegiate sports, from wrestling to tennis, track, and soccer. Now, a new on-campus exhibit, “China Comes to Tech: 1877-1931,” gathers materials from this chapter in MIT history for the first time. The exhibit opens today, Feb. 10, and runs free of charge through November, in MIT’s Maihaugen Gallery in Building 14N. MIT News talked with Emma Teng, a professor of history and global studies who helped develop and curate the exhibit.

Q: When did Chinese students start coming to MIT, and why?

A: A lot of people don’t know that Chinese students were here this early, but in 1877 one student [Mon Cham Cheong] from Guangdong, China, matriculated at MIT’s School of Mechanic Arts. Then, beginning in 1879, a batch of eight students on the Chinese Educational Mission came here under the sponsorship of the Chinese government. The students at that time were mainly focused on learning railroad engineering, mining engineering, mechanical engineering, and naval architecture. Soon, MIT became one of the favorite destinations for Chinese science and engineering students.

MIT was well ahead of the curve in terms of U.S. institutions with international students: In the 100 years between 1854 and 1954, MIT granted the third-highest number of degrees to students from China [among all universities], which I think is very impressive. The MIT faculty and administration did a lot to encourage the students from China. When the Chinese government recalled the Chinese Educational Mission students back to China in 1881, the MIT faculty banded together and wrote a strong letter of remonstrance to the Chinese government. They were really trying to support the students to stay here and finish their educations.

Q: What was the overall experience like for these students?

A: The early students faced a number of challenges. Not only were they learning a rigorous science and engineering curriculum, but they also had to master English and adjust to a new culture. One of the things I learned was how immersed the early students were, especially those who came in the 1910s and 1920s, in all aspects of MIT student life. They participated in athletics, debate, theater, the professional societies, … the Institute Committee; they were really involved in virtually every aspect of student life. There were Chinese students who were president and vice president of the naval architecture society. There was a Chinese student who became captain of the wrestling team. … [Another] was captain of the tennis team and went on to lead China’s first Davis Cup team. So they excelled in many fields in addition to science and engineering.

We only have a record of one Chinese woman who came here [before 1931]. Her name was Miss Li Fu Lee, and she was married to another engineering student. She came here in 1925, and she was majoring in electrical engineering. She was the first Chinese woman we know of to major in electrical engineering in the United States. She became quite famous in the Chinese student community nationally, [because] she chose a very difficult major at one of the [academically] toughest institutions in the United States. We don’t know very much about what happened to her when she went back to China, but I would love to uncover more about her history.

Q: What kinds of things would you like people to consider when they view the exhibit?

A: I’m hoping the exhibit will really inspire people to reflect on what international students contribute to MIT and to America at large. I think one of the most powerful lessons that I learned myself is that not only did many Chinese leaders in science and technology in China get their educations here at MIT, but they also contributed a lot to the MIT community during their years here.

They really worked as cultural ambassadors to let the MIT and greater Boston communities learn more about Chinese culture and history and current events. And they inspired some of our professors to learn more about the history of science in China. They were also an important bridge in bringing MIT alumni and faculty to China in the 1910s and 1920s, sometimes to lecture or teach at the universities, or else to practice engineering in Chinese firms. They really benefitted MIT in many ways. So it’s exciting to see these as a bridge that brought “Tech” back to China, but also promoted knowledge of China here at MIT. And it’s this two-way exchange that international students bring to our communities.

The long history of ‘Eurasian’ identity