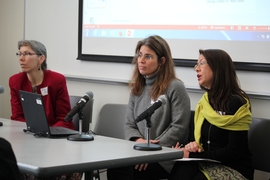 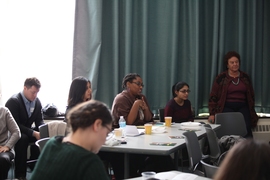 Beyond being a human necessity, food can serve as a symbol of social class or national identity; a consuming hobby; or even a battleground for raw politics. Last Friday at MIT, food also became a lens on history: A scholarly conference revealed rich new research on gender, migration, and ethnicity, all refracted through the study of cuisine.

To see how food sheds light on social history, consider Asian immigration to the U.S.: Chinese-Americans have long been burdened with food-based stereotypes, such as the idea that dogs are standard fare in China.

“They contested the notion of indiscriminate omnivorousness,” said Teng, an MIT professor of global studies and languages. In so doing, she added, the Chinese-American cooking stars were significant figures “in the fight against racism, bigotry, and ethnocentrism.”

The four celebrity cooks also sought to move Chinese food beyond chop suey, the simple platter often served when Chinese restaurants experienced a popularity surge in the U.S. during the 1920s.

Why did Chinese food become more popular at the time, anyway? It wasn’t really the food, MIT postdoc Heather Lee explained in her talk; instead, she maintained, Chinese restaurants were a social space were American women, experiencing a decade of emancipation, could socialize with men beyond the disapproving gaze of established American society. The growth of Chinese restaurants helped accelerate the “end of Victorian-era physical separation of genders,” Lee observed, with women now “physically occupying places they had not been before.”

Meanwhile, for New York’s few immigrants from the Indian subcontinent in the first half of the 20th century, and to some extent beyond, “Restaurants were important communal spaces,” said MIT’s Vivek Bald, an associate professor in Comparative Media Studies/Writing who has studied South Asian immigration. Indians would gather in restaurants to talk politics, leading British agents to put the Ceylon India Inn, on West 49th Street, under surveillance.

They deserved a break

The conference, “Consuming Food, Producing Culture,” featured more than a dozen talks by scholars from several universities, and was hosted by MIT’s programs in Women’s and Gender Studies and in Global Studies and Languages.

According to Chatelain, McDonald’s started marketing its food to African-Americans, and the licensing structure of its franchises in the 1960s provided apparent economic opportunities for entrepreneurs. But by the 1980s, a stumbling economy and suburban flight, among other things, had narrowed restaurant management as a path to upward mobility; at least one prominent African-American franchise owner sued McDonald’s for a lack of institutional support, while the relationship between African-Americans and the giant restaurant chain “moved simultaneously forward and backward,” Chatelain said.

Gender and the cookbook

Several talks examined gender roles and food. Ina Lipkowitz, a lecturer in literature at MIT and author of the 2011 book “Words to Eat by: Five Foods and the Culinary History of the English,” presented a talk on cookbooks, noting that over the centuries, female authors have largely presented themselves as plain-spoken cooks with down-home practical advice.

As a popular English cookbook author, Hanna Glass, wrote in 1749, “I don’t pretend to teach professed cooks.” Today, Lipkowitz observed, that attitude is echoed by, among others, television-cooking personality Rachael Ray, who tells viewers, “I am no formal anything.”

By contrast, it is men who have assumed the public role of the elite, formally trained chefs, often “portraying themselves as creative and inspired,” said Barbara Haber, the noted food historian who built a unique collection of food texts at Harvard University’s Radcliffe Institute for Advanced Study.

Food also figures heavily in tropes of national identity. As historian Harriet Ritvo, the Arthur J. Connor Professor at MIT, noted, the British have long extoled the value of a meat-rich diet in fueling an energetic people to build a global empire. Below the surface, however, some British figures expressed serious concern about the country’s ability to feed itself in the late 18th century, in a time of war, “domestic population growth, rising rents and food prices, serious harvest shortfalls,” and more, noted Anya Zilberstein, a historian at Concordia University in Montreal.

As a result, some British scientists began exploring ways of creating cheap methods of feeding the poor, the imprisoned, and the enslaved, using breadfruit, wild rice, or cornmeal, “much as farmers provided fodder for livestock,” added Zilberstein, who is working on a book about the subject.

Yes, even more than 200 years ago, scientists were looking to industrial methods to maximize food production. They still are, of course; as MIT anthropologist Heather Paxson, the William R. Kenan Jr. Professor, noted, even public-interest biomedical groups today struggle to define cheese, because it is created both organically and synthetically.

The history of food can thus put the present in better perspective, as MIT professor of history Anne McCants demonstrated while discussing her research on 18th-century Dutch consumers; a close look at consumer possessions, in dusty archives, can uncover important data about diet, food, and global commerce.

“The job of the historian is to pull that three-dimensional existence out of that page,” McCants said — and out of the farm, the restaurant, and the cookbook.