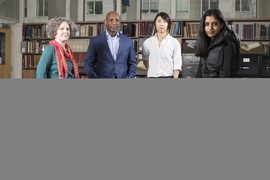 ↓ Download Image
Caption: From left to right: Nora Murphy, archivist for researcher services in the Institute Archives and Special Collections; Craig Steven Wilder, the Barton L. Weller Professor of History in the School of Humanities, Arts, and Social Sciences; Clare Kim, a graduate student in the HASTS program (History, Anthropology, and Science, Technology, and Society) who served as teaching assistant for Murphy and Wilder's course; and Mahalaxmi Elango, a second-year student in the Department of Electrical Engineering and Computer Science, who was a student in the course. 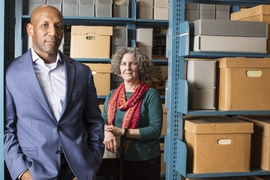 Caption:
From left to right: Nora Murphy, archivist for researcher services in the Institute Archives and Special Collections; Craig Steven Wilder, the Barton L. Weller Professor of History in the School of Humanities, Arts, and Social Sciences; Clare Kim, a graduate student in the HASTS program (History, Anthropology, and Science, Technology, and Society) who served as teaching assistant for Murphy and Wilder's course; and Mahalaxmi Elango, a second-year student in the Department of Electrical Engineering and Computer Science, who was a student in the course.

MIT’s first president, William Barton Rogers, possessed enslaved persons in his Virginia household until the early 1850s, roughly a decade before he founded the Institute, according to new research from an MIT history class scholars and administrators designed to examine the legacy of slavery in relationship to the university.

While Massachusetts outlawed slavery in the early 1780s, Rogers lived in Virginia, where slavery was still legal, from 1819 until 1853, mostly on the campuses of the College of William and Mary and the University of Virginia. Documents from the time indicate that in those settings, Rogers had enslaved persons in his household in both 1840 and 1850.

MIT was founded in 1861 and began offering classes in 1865, just as the U.S. Civil War was ending the era of legal slavery in the South. But even as the Institute emerged in a new historical period, it bore marks of that older era as well.

“Our founder was a slave owner,” says Craig Steven Wilder, the Barton L. Weller Professor of History at MIT and a leading expert on the links between universities and slavery. Given how often such institutions drew personnel and material support from wealthy families that had profited from slavery, “people shouldn’t be surprised that MIT has these connections,” Wilder notes.

“I think that by looking at MIT’s ties to slavery, what you start to see is the centrality of slavery to the rise of the United States and its institutions,” Wilder adds.

The discovery comes from an archival research class for undergraduates that was set in motion by MIT’s president, L. Rafael Reif, and held in the fall of 2017 under the guidance of Wilder and Nora Murphy, an archivist in the MIT Libraries.

“We need to ask all kinds of questions, and it’s important to keep an open mind because sometimes the findings are unexpected,” says Murphy, who is MIT’s archivist for researcher services. Once the project was under way, she adds, it was “easy to just begin to look at the censuses and see who was living in the household.”

President Reif says the new finding is an important step toward a better understanding of MIT’s history, and will lead to a productive dialogue about the Institute’s relationship to society, past and present.

“At MIT, we believe in looking at the facts, even when they’re painful. So I am deeply grateful to Professor Wilder for giving us a mechanism for finding and sharing the truth,” Reif says. “The next challenge is up to all of us: embracing this opportunity to take a new look at our past, and exploring together how to tell a more complete version of our history.”

A charge to investigate

The class emerged in part from discussions about MIT’s possible historical links to slavery, held among leaders in MIT’s Office of Minority Education and MIT’s central administration. With Reif seeking ways of examining the subject with a sharper historical lens, the Institute turned to Wilder, a scholar who has established himself as the leading expert on the historical connections between slavery and American universities, and asked him to propose a path forward.

“One of the things that MIT owes all of us, itself, its constituencies, its alumni, its students, its faculty, and the broader public is to be brutually honest about its past,” Wilder says.

Wilder’s award-winning 2013 book, “Ebony and Ivy,” documents how slavery shaped U.S. colleges and universities from the 1600s onward. Such institutions were often founded or run by men who were slaveholders and slave traders, who received financial support from slave-based businesses, or who recruited students from families who had grown wealthy from such forms of commerce.

Given that MIT was founded more recently than those other institutions, it might seem a less obvious candidate for historical scrutiny in this regard. But the pervasive entanglement of slavery in the U.S. made the possibility of connections to the Institute worth examining more closely.

“The MIT way is to confront challenges and not to shrink from them, and so that was the impetus for the class,” says Melissa Nobles, dean of MIT’s School of Humanities, Arts, and Social Sciences.

Wilder and Murphy proposed the class, which became 21H.S01 (MIT and Slavery), to Nobles and Reif, among others in MIT’s administration. They received approval and will continue offering the class in the future.

“It has been wonderful to have President Reif’s support and his willingness to be as transparent as possible about the class, and what the class is looking into, and what the results of the class are,” Murphy says.

Students in the archives

“MIT and Slavery” is designed to have undergraduates do original archival research. While virtually all history courses assign substantial secondary reading, and many ask students to read primary-source documents or visit archives to an extent, 21H.S01 had students performing archival work from the first weeks of the semester onward.

“It was a very different sort of way of teaching and doing a class, working so closely with the archives,” Murphy says.

Primary-source archives, Wilder adds, are where historians “spend much of our creative time, and some of the most important intellectual experiences that we have are actually in the archives. So bringing students into that space … was really, in fact, this intense research experience for them … right in the laboratory of history.”

Each student then settled on a research topic. One examined racial imagery in early MIT student publications; another studied student debate of a mural on campus that reproduced J.M.W. Turner’s 1840 painting, “Slavers Throwing Overboard the Dead and Dying,” and found that the discussion focused on the history of technology and not the question of slavery itself.

A third student found that in its early years, MIT held a popular class in moral philosophy that discussed slavery, but it dropped the course by the 1880s. A fourth research project examined how MIT drew students from Louisville, Kentucky, and then sent graduates back to the South during the Reconstruction period.

Understanding MIT’s involvement in Reconstruction is bound to be a major topic for the class’ students in the future, Wilder observes.

“The rise of MIT is in many ways a story of the transformation from a slave economy to a post-slavery industrial economy, with lots of racial legacies and lots of unresolved conflicts that continue to play out in the United States today, including the really quite critical question of the position of black people and black labor in American society, and how we will ultimately define freedom for people who aren’t white,” Wilder says.

An additional concept for all students to wrestle with, Wilder notes, is that technology itself, and the institutions developing it, do not stand apart from society, but are always entangled in it.

“What we have to understand is that technology, engineering, and science are, in fact, human endeavors that are driven by the economic, the commercial, and the political interests of nations,” Wilder says.

Even as further iterations of the class continue, MIT intends the new findings about Rogers and the other topics to form the basis of a community dialogue about the Institute and the legacy of slavery. On Feb. 16, MIT will host an event that features a conversation involving Reif, Wilder, and Murphy, and includes presentations by the students who participated in the class, who will speak about their research projects.

“History burdens all of us, and part of what it means to be in a community is that we share each other’s burden,” Nobles says. “So my expectation and my hope is, given the nature of the MIT community and our commitment to each other, that we will see this as a shared responsibility and we will all participate … to help each of us understand what it means to us as individuals, and what it means for the institution as a whole.”

Beyond campus, Wilder is also working to develop an ongoing research project involving MIT and other prominent technical universities founded in the 19th century, in which all the institutions have a chance to explore the legacies of slavery in science, engineering, and technical education during the 1800s.

“MIT is part of a larger exploration of the ties between American universities and slavery, but we are not just participating, we are also leading a part of it,” Wilder says. “We are leading the research about the relationship of technology and science to the institution of slavery — not only to better understand our own history, but to fulfill our role as an elite university and to help build our role for the 21st century.”

NBC Boston reporter Frank Holland visits MIT to discuss the Institute’s ties to slavery, which is the subject of a new undergraduate research course. “MIT and Slavery class is pushing us into a national conversation. A conversation that’s well underway in the rest of country regarding the role of slavery and institutions of higher learning,” said Dean Melissa Nobles.

Prof. Craig Steven Wilder and archivist Nora Murphy speak with Heather Goldstone of Living Lab Radio on WCAI about a new undergraduate course to research MIT’s historical ties to slavery. “The story of MIT also tells us about the centrality of slavery to the United States economy and to the rise of the United States as we know it,” says Wilder.

After being charged by MIT’s president to investigate the Institute’s ties to slavery, Prof. Craig Wilder led a new class that “uncovered myriad connections… some blatant and others nuanced,” reports Laura Krantz for The Boston Globe. SHASS Dean Melissa Nobles says it’s important to study MIT’s role in post-Civil War Reconstruction: “At the end of day, MIT is about ideas. It’s about better understanding human knowledge and advancing it. And one way we advance it is by understanding its origins.”

The once and future library