3 Questions: Emma Teng on anti-Asian American violence in the US 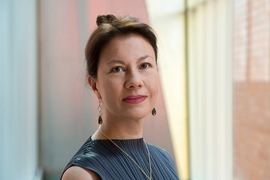 A string of murders and violent attacks against Asian Americans has jolted the U.S. over the last year. As shocking as these incidents are, they are not novel. Asian Americans and Asian immigrants have long had to contend with physical attacks and discrimination, something evident in the research of Emma Teng, the T.T. and Wei Fong Chao Professor of Asian Civilizations at MIT, and author of the 2013 book “Eurasian: Mixed Identities in the United States, China, and Hong Kong, 1842-1943.” A leading scholar of cross-cultural identity, social assimilation, and exclusion, Teng recently spoke with MIT News about the current crisis of violence against Asian Americans.

Q: There has been a wave of violence against Asian Americans over the last year. To what extent do you see continuities with the past in this regard, and to what extent are recent events different?

A: As a historian, I see the continuities. On the surface, when we hear about the mass shooting in Atlanta or the incidents of violence against elders across the country, we tend to think this is a reaction to Covid-19, or the trade war with China, or recent political rhetoric. But from a historian’s perspective, and from an Asian American perspective, we see a long pattern of anti-Asian sentiment and violence that dates back to the 19th century. I see this as related to American ambivalence toward Asians and people of Asian descent. On the one hand, Asian Americans are [regarded as being] needed, for labor, skills, knowledge, as trade partners. On the other hand, they’re seen as competition or a threat.

There’s also this narrative of celebrating Asian immigrants as an example of successful assimilation, while viewing them as perpetual foreigners. I still hear this a lot: “Where are you from?” Or: “Your English is so good, where did you learn it?”

We’ve seen anti-Asian sentiment and anti-Asian violence dating back to the 19th century. There are some famous examples, like the Rock Springs Massacre in Wyoming in 1885, in which 28 Chinese miners were killed and 78 injured, by white immigrant miners who saw the Chinese as taking their opportunities. Then there were the Pacific Coast Race Riots of 1907, in the U.S. and Canada, which targeted East Asians and South Asians.

We see governmental responses with the Chinese Exclusion Law of 1882, the first U.S. immigration law that targeted a racial group for restriction and exclusion from the country, and the internments of Japanese and Japanese Americans during World War II. After World War II there’s economic competition driving some anti-Asian sentiment, [including] the Vincent Chin murder in 1982 [a Chinese American engineer in Detroit was killed outside a bar by out-of-work auto industry employees who thought he was Japanese, and were angry about competition from foreign carmakers], and experiences related to the Vietnam War and other wars.

This pattern of scapegoating and violence has reared its ugly head again. People are noticing it in the wake of the Atlanta shootings, but it’s really been since January 2020. On a more positive note, another pattern I see is the very vital role of allies to Asian Americans, who are absolutely crucial in trying to fight back against this.

Q: Speaking of allies, you have a newly published paper in Modern American History, about a group of well-off Chinese students being detained in the U.S. in 1905. They had well-connected American friends who could help them out with the authorities.  How much is there a class element in the way different Asian Americans are treated — is it possible to generalize?

A: The King incident from 1905 happened here in Boston. There were four highly elite students from China who had studied in London and were coming to Boston to visit their friends, then go to Niagara Falls, then back to China. But because they didn’t have the right paperwork they were detained at the port of Boston and not allowed to enter. And in this case their white Euro-American allies stepped forward, protested to President Roosevelt, wrote letters to the newspapers, and really advocated on their behalf. The timing of this incident, in 1905, was right when Chinese merchants in Shanghai and Canton were talking about boycotting American goods to protest the injustice of Chinese exclusion. President Roosevelt acted very quickly [and] made it possible for these students to travel through the U.S.

Class is very much baked into it. The Chinese Exclusion Act only targeted laborers, and it made an exemption clause for various categories of migrants, students, merchants, teachers, diplomats, and travelers for curiosity or pleasure — in other words, elite travelers. But at the same time, what I show in the article on the King incident is, sometimes even class privilege doesn’t protect the Chinese from racial harassment.

Q: Circling back to what you said a little earlier, do you feel Asian Americans have more allies in society at this point, when it comes to standing up against violence? Is it more possible today in some ways to bring attention to anti-Asian sentiment and violence in America?

A: When looking at racism and violence, it’s really important not to divide Asian Americans from other minority groups in the United States. This isn’t just the targeting of Asian Americans versus the targeting of African Americans or others. There is a very broad history in the United States of dispossessing indigenous people from their lands, enslaving people of African descent, and demonizing undocumented immigrants and other forms of oppression or exclusion. It’s part of a whole picture that cannot be divided.

One thing more specific to the Asian American experience is the model minority myth, which I think has contributed to the invisibility of Asian Americans. The model minority myth perpetuates this idea that Asian immigrants are successful at assimilating into American society, they’re highly educated, they have high incomes — in other words, they don’t have social “problems.” This is highly problematic and hides the fact there are many diverse Asian American and immigrant groups in this country, ranging from South Asians to East Asians, and Southeast Asians, as well as Pacific Islanders, some of whom live in poverty and really struggle in our educational system. I think it represents a real blind spot in our culture.

One of the big differences today is the role of social media, which is a double-edged sword. We get news of these incidents quickly and can protest and make our voices heard, but social media has also been stoking a lot of anti-Asian sentiment. … A lot of the things I’ve seen on social media are horrifyingly ugly, almost worse than anything I’ve seen in 19th-century history.

But I do think there are more allies [across groups] and more pan-Asian-American solidarity today, a recognition that this impacts all of us regardless of country of origin, or how long you’ve been in this country, and that there’s strength in numbers. In the 19th century, there wasn’t any pan-Asian solidarity. The pan-Asian American movement was more emergent around the Vincent Chin incident, which also garnered support from diverse civil rights activists, but I do think it is stronger today. I think people will look back on the Atlanta shootings as a turning point.

The long history of ‘Eurasian’ identity