Progress toward a Zika vaccine 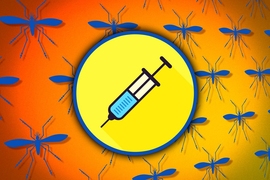 ↓ Download Image
Caption: MIT researchers have devised a new vaccine candidate for the Zika virus. “It functions almost like a synthetic virus, except it’s not pathogenic and it doesn’t spread,” says postdoc Omar Khan.

Caption:
MIT researchers have devised a new vaccine candidate for the Zika virus. “It functions almost like a synthetic virus, except it’s not pathogenic and it doesn’t spread,” says postdoc Omar Khan.

Using a new strategy that can rapidly generate customized RNA vaccines, MIT researchers have devised a new vaccine candidate for the Zika virus.

The vaccine consists of strands of genetic material known as messenger RNA, which are packaged into a nanoparticle that delivers the RNA into cells. Once inside cells, the RNA is translated into proteins that provoke an immune response from the host, but the RNA does not integrate itself into the host genome, making it potentially safer than a DNA vaccine or vaccinating with the virus itself.

“It functions almost like a synthetic virus, except it’s not pathogenic and it doesn’t spread,” says Omar Khan, a postdoc at MIT’s Koch Institute for Integrative Cancer Research and an author of the new study. “We can control how long it’s expressed, and it’s RNA so it will never integrate into the host genome.”

This research also yielded a new benchmark for evaluating the effectiveness of other Zika vaccine candidates, which could help others who are working toward the same goal.

Jasdave Chahal, a postdoc at MIT’s Whitehead Institute for Biomedical Research, is the first author of the paper, which appears in Scientific Reports. The paper’s senior author is Hidde Ploegh, a former MIT biology professor and Whitehead Institute member who is now a senior investigator in the Program in Cellular and Molecular Medicine at Boston Children’s Hospital.

Other authors of the paper are Tao Fang and Andrew Woodham, both former Whitehead Institute postdocs in the Ploegh lab; Jingjing Ling, an MIT graduate student; and Daniel Anderson, an associate professor in MIT’s Department of Chemical Engineering and a member of the Koch Institute and MIT’s Institute for Medical Engineering and Science (IMES).

The MIT team first reported its new approach to programmable RNA vaccines last year. RNA vaccines are appealing because they induce host cells to produce many copies of the proteins encoded by the RNA. This provokes a stronger immune reaction than if the proteins were administered on their own. However, finding a safe and effective way to deliver these vaccines has proven challenging.

The researchers devised an approach in which they package RNA sequences into a nanoparticle made from a branched molecule that is based on fractal-patterned dendrimers. This modified-dendrimer-RNA structure can be induced to fold over itself many times, producing a spherical particle about 150 nanometers in diameter. This is similar in size to a typical virus, allowing the particles to enter cells through the same viral entry mechanisms. In their 2016 paper, the researchers used this nanoparticle approach to generate experimental vaccines for Ebola, H1N1 influenza, and the parasite Toxoplasma gondii.

In the new study, the researchers tackled Zika virus, which emerged as an epidemic centered in Brazil in 2015 and has since spread around the world, causing serious birth defects in babies born to infected mothers. Since the MIT method does not require working with the virus itself, the researchers believe they might be able to explore potential vaccines more rapidly than scientists pursuing a more traditional approach.

Instead of using viral proteins or weakened forms of the virus as vaccines, which are the most common strategies, the researchers simply programmed their RNA nanoparticles with the sequences that encode Zika virus proteins. Once injected into the body, these molecules replicate themselves inside cells and instruct cells to produce the viral proteins.

The entire process of designing, producing, and testing the vaccine in mice took less time than it took for the researchers to obtain permission to work with samples of the Zika virus, which they eventually did get.

“That’s the beauty of it,” Chahal says. “Once we decided to do it, in two weeks we were ready to vaccinate mice. Access to virus itself was not necessary.”

When developing a vaccine, researchers usually aim to generate a response from both arms of the immune system — the adaptive arm, mediated by T cells and antibodies, and the innate arm, which is necessary to amplify the adaptive response. To measure whether an experimental vaccine has generated a strong T cell response, researchers can remove T cells from the body and then measure how they respond to fragments of the viral protein.

Until now, researchers working on Zika vaccines have had to buy libraries of different protein fragments and then test T cells on them, which is an expensive and time-consuming process. Because the MIT researchers could generate so many T cells from their vaccinated mice, they were able to rapidly screen them against this library. They identified a sequence of eight amino acids that the activated T cells in the mouse respond to. Now that this sequence, also called an epitope, is known, other researchers can use it to test their own experimental Zika vaccines in the appropriate mouse models.

“We can synthetically make these vaccines that are almost like infecting someone with the actual virus, and then generate an immune response and use the data from that response to help other people predict if their vaccines would work, if they bind to the same epitopes,” Khan says. The researchers hope to eventually move their Zika vaccine into tests in humans.

“The identification and characterization of CD8 T cell epitopes in mice immunized with a Zika RNA vaccine is a very useful reference for all those working in the field of Zika vaccine development,” says Katja Fink, a principal investigator at the A*STAR Singapore Immunology Network. “RNA vaccines have received much attention in the last few years, and while the big breakthrough in humans has not been achieved yet, the technology holds promise to become a flexible platform that could provide rapid solutions for emerging viruses.”

Fink, who was not involved in the research, added that the “initial data are promising but the Zika RNA vaccine approach described needs further testing to prove efficacy.”

Another major area of focus for the researchers is cancer vaccines. Many scientists are working on vaccines that could program a patient’s immune system to attack tumor cells, but in order to do that, they need to know what the vaccine should target. The new MIT strategy could allow scientists to quickly generate personalized RNA vaccines based on the genetic sequence of an individual patient’s tumor cells.

The research was funded by the National Institutes of Health, a Fujifilm/MediVector grant, the Lustgarten Foundation, a Koch Institute and Dana-Farber/Harvard Center Center Bridge Project award, the Department of Defense Office of Congressionally Directed Medical Research’s Joint Warfighter Medical Research Program, and the Cancer Center Support Grant from the National Cancer Institute.

A safer way to vaccinate