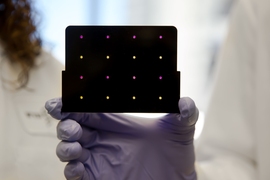 ↓ Download Image
Caption: A black cartridge containing a paper-based diagnostic for detecting the Zika virus is held up by a researcher at Harvard's Wyss Institute. Areas that have turned purple indicate samples infected with Zika, while yellow areas indicate samples that are free of the virus. 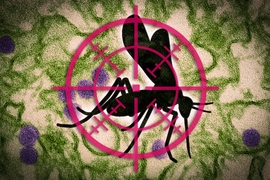 ↓ Download Image
Caption: In this illustration, a micrograph in the background shows Zika virus particles in blue.

A new paper-based test developed at MIT and other institutions can diagnose Zika virus infection within a few hours. The test, which distinguishes Zika from the very similar dengue virus, can be stored at room temperature and read with a simple electronic reader, making it potentially practical for widespread use.

An outbreak of the Zika virus that began in Brazil in April 2015 has been linked to a birth defect known as microcephaly. Many infected people experience no symptoms, and when symptoms do appear they are very similar to those of related viruses such as dengue and chikungunya.

Currently, patients are diagnosed by testing whether they have antibodies against Zika in their bloodstream, or by looking for pieces of the viral genome in a patient’s blood sample, using a test known as polymerase chain reaction (PCR). However, these tests can take days or weeks to yield results, and the antibody test cannot discriminate accurately between Zika and dengue.

“One of the key problems in the field is being able to distinguish what these patients have in areas where these viruses are co-circulating,” says Lee Gehrke, the Hermann L.F. von Helmholtz Professor in IMES and an author of the paper.

The new device is based on technology that Collins and colleagues previously developed to detect the Ebola virus. In October 2014, the researchers demonstrated that they could create synthetic gene networks and embed them on small discs of paper. These gene networks can be programmed to detect a particular genetic sequence, which causes the paper to change color.

Upon learning about the Zika outbreak, the researchers decided to try adapting their device to diagnose Zika, which has spread to other parts of South and North America since the outbreak began in Brazil.

“In a small number of weeks, we developed and validated a relatively rapid, inexpensive Zika diagnostic platform,” says Collins, who is also a member of the Wyss Institute.

Collins and his colleagues developed sensors, embedded in the paper discs, that can detect 24 different RNA sequences found in the Zika viral genome, which, like that of many viruses, is composed of RNA instead of DNA. When the target RNA sequence is present, it initiates a series of interactions that turns the paper from yellow to purple.

This color change can be seen with the naked eye, but the researchers also developed an electronic reader that makes it easier to quantify the change, especially in cases where the sensor is detecting more than one RNA sequence.

All of the cellular components necessary for this process — including proteins, nucleic acids, and ribosomes — can be extracted from living cells and freeze-dried onto paper. These paper discs can be stored at room temperature, making it easy to ship them to any location. Once rehydrated, all of the components function just as they would inside a living cell.

The researchers also incorporated a step that boosts the amount of viral RNA in the blood sample before exposing it to the sensor, using a system called NASBA (nucleic acid sequence based amplification). This amplification step, which takes one to two hours, increases the test’s sensitivity 1 million-fold.

Julius Lucks, an assistant professor of chemical and biomolecular engineering at Cornell University, says that this demonstration of rapidly customizable molecular sensors represents a huge leap for the field of synthetic biology.

“What’s really exciting here is you can leverage all this expertise that synthetic biologists are gaining in constructing genetic networks and use it in a real-world application that is important and can potentially transform how we do diagnostics,” says Lucks, who was not involved in the research.

The team tested the new device using synthesized RNA sequences corresponding to the Zika genome, which were were then added to human blood serum. The researchers showed that the device could detect very low viral RNA concentrations in those samples and could also distinguish Zika from dengue.

The researchers then tested the device with samples taken from monkeys infected with the Zika virus. (Samples from human patients affected by the current Zika outbreak are very difficult to obtain.) They found that in these samples, the device could detect viral RNA concentrations as low as 2 or 3 parts per quadrillion.

The researchers envision that this approach could also be adapted to other viruses that may emerge in the future. Collins now hopes to team up with other scientists to further develop the technology for diagnosing Zika.

“Here we’ve done a nice proof-of-principle demonstration, but more work and additional testing would be needed to ensure safety and efficacy before actual deployment,” he says. “We’re not far off.”

The research was funded by the Wyss Institute for Biologically Inspired Engineering, MIT’s Center for Microbiome Informatics and Therapeutics, the Defense Threat Reduction Agency, and the National Institutes of Health.

Prof. James Collins has been named one of The Boston Globe’s “2016 Bostonians of the Year” for his work developing a paper-based test that can detect the Zika virus in just a few hours. Neil Swidey notes that Collins also developed a “workflow for how this new platform could be adapted to meet future crises.”

A paper-based test that can detect the Zika virus, developed by Prof. James Collins and his research team, is featured in a list of the year’s most important health innovations compiled Alyssa Favreau and Claire Maldarelli for Popular Science. Unlike conventional lab tests, the paper-based test can provide results within three hours.

In an article for The Huffington Post, Susan Blumenthal highlights how researchers from MIT have developed a paper-based test for diagnosing the Zika virus. Blumenthal writes that “the test consists of a paper covered with yellow dots that turns purple in the presence of the RNA of the virus.”