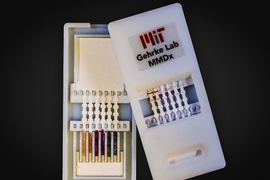 ↓ Download Image
Caption: A new paper diagnostic device can detect Ebola as well as other viral hemorrhagic fevers in about 10 minutes. The device (pictured here) has silver nanoparticles of different colors that indicate different diseases. On the left is the unused device, opened to reveal the contents inside. On the right, the device has been used for diagnosis; the colored bands show positive tests.

Caption:
A new paper diagnostic device can detect Ebola as well as other viral hemorrhagic fevers in about 10 minutes. The device (pictured here) has silver nanoparticles of different colors that indicate different diseases. On the left is the unused device, opened to reveal the contents inside. On the right, the device has been used for diagnosis; the colored bands show positive tests.
Credits:
Photo courtesy of Jose Gomez-Marquez, Helena de Puig, and Chun-Wan Yen

When diagnosing a case of Ebola, time is of the essence. However, existing diagnostic tests take at least a day or two to yield results, preventing health care workers from quickly determining whether a patient needs immediate treatment and isolation.

A new test from MIT researchers could change that: The device, a simple paper strip similar to a pregnancy test, can rapidly diagnose Ebola, as well as other viral hemorrhagic fevers such as yellow fever and dengue fever.

“As we saw with the recent Ebola outbreak, sometimes people present with symptoms and it’s not clear what they have,” says Kimberly Hamad-Schifferli, a visiting scientist in MIT’s Department of Mechanical Engineering and a member of the technical staff at MIT’s Lincoln Laboratory. “We wanted to come up with a rapid diagnostic that could differentiate between different diseases.”

Currently, the only way to diagnose Ebola is to send patient blood samples to a lab that can perform advanced techniques such as polymerase chain reaction (PCR), which can detect genetic material from the Ebola virus. This is very accurate but time-consuming, and some areas of Africa where Ebola and other fevers are endemic have limited access to this kind of technology.

The new device relies on lateral flow technology, which is used in pregnancy tests and has recently been exploited for diagnosing strep throat and other bacterial infections. Until now, however, no one has applied a multiplexing approach, using multicolored nanoparticles, to simultaneously screen for multiple pathogens.

“For many hemorrhagic fever viruses, like West Nile and dengue and Ebola, and a lot of other ones in developing countries, like Argentine hemorrhagic fever and the Hantavirus diseases, there are just no rapid diagnostics at all,” says Gehrke, who began working with Hamad-Schifferli four years ago to develop the new device.

Unlike most existing paper diagnostics, which test for only one disease, the new MIT strips are color-coded so they can be used to distinguish among several diseases. To achieve that, the researchers used triangular nanoparticles, made of silver, that can take on different colors depending on their size.

The researchers created red, orange, and green nanoparticles and linked them to antibodies that recognize Ebola, dengue fever, and yellow fever. As a patient’s blood serum flows along the strip, any viral proteins that match the antibodies painted on the stripes will get caught, and those nanoparticles will become visible. This can be seen by the naked eye; for those who are colorblind, a cellphone camera could be used to distinguish the colors.

This process takes about 10 minutes, allowing health care workers to rapidly perform triage and determine if patients should be isolated, helping to prevent the disease from spreading further.

Warren Chan, an associate professor at the University of Toronto Institute of Biomaterials and Biomedical Engineering, says he is impressed with the device because it not only offers faster diagnosis, but also requires smaller patient blood samples, as just one test strip can detect multiple diseases. “It’s a step up from what everyone else is doing,” says Chan, who was not involved in the research. “They’re targeting diseases that are really relevant to what’s going on in the world at this point, and have shown that they can detect them simultaneously.”

The researchers envision their new device as a complement to existing diagnostic technologies, such as PCR.

“If you’re in a situation in the field with no power and no special technologies, if you want to know if a patient has Ebola, this test can tell you very quickly that you might not want to put that patient in a waiting room with other people who might not be infected,” says Gehrke, who is also a professor of microbiology and immunology at Harvard Medical School. “That initial triage can be very important from a public health standpoint, and there could be a follow-up test later with PCR or something to confirm.”

The researchers hope to obtain Food and Drug Administration approval to begin using the device in areas where the Ebola outbreak is still ongoing. In order to do that, they are now testing the device in the lab with engineered viral proteins, as well as serum samples from infected animals.

This type of device could also be customized to detect other viral hemorrhagic fevers or other infectious diseases, by linking the silver nanoparticles to different antibodies.

“Thankfully the Ebola outbreak is dying off, which is a good thing,” Gehrke says. “But what we’re thinking about is what’s coming next. There will undoubtedly be other viral outbreaks. It might be Sudan virus, it might be another hemorrhagic fever. What we’re trying to do is develop the antibodies needed to be ready for the next outbreak that’s going to happen.”

The research was funded by the National Institute of Allergy and Infectious Disease.

Researchers at MIT and Harvard have developed a new device that can quickly detect Ebola, reports Robert Preidt for U.S. News & World Report. “The new paper-based test takes minutes and the device does not require electricity,” writes Preidt. “The test works in a similar manner to over-the-counter pregnancy tests.”

Miles O’Brien of the PBS NewsHour reports on how scientists are developing cheaper and more efficient tests for Ebola, highlighting Prof. Lee Gehrke’s simple diagnostic kits. Gehrke explains that the test his team developed is “very simple, requires no refrigeration, no power, no special training.”

MIT researchers have developed a test for Ebola and other fevers using gold nanoparticle sensors that quickly identify the pathegon, writes Andrea Timpano for Boston Magazine. “It is important to recognize that the United States needs to have strategies for surveillance that will identify dangerous viruses,” says Professor Lee Gehrke.

“A promising new diagnostic test from MIT looks like it could be a game changer for rapidly diagnosing several important infectious diseases within minutes,” writes Judy Stone for Forbes. The paper test developed by MIT researchers can diagnose Ebola, yellow fever and dengue fever.

MIT researchers have developed a new silver nanoparticle-based paper test that can quickly detect dengue, yellow fever and Ebola, reports Vicki Davison for Scientific American. In addition to the paper test, the researchers are also working on developing a mobile application to ease diagnosis.

3 Questions: Lee Gehrke on a new paper diagnostic for Ebola

Letter to MIT community regarding Ebola precautions and preparedness