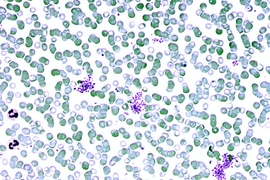 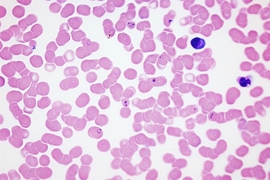 Over the past several decades, malaria diagnosis has changed very little. After taking a blood sample from a patient, a technician smears the blood across a glass slide, stains it with a special dye, and looks under a microscope for the Plasmodium parasite, which causes the disease. This approach gives an accurate count of how many parasites are in the blood — an important measure of disease severity — but is not ideal because there is potential for human error.

A research team from the Singapore-MIT Alliance for Research and Technology (SMART) has now come up with a possible alternative. The researchers have devised a way to use magnetic resonance relaxometry (MRR), a close cousin of magnetic resonance imaging (MRI), to detect a parasitic waste product in the blood of infected patients. This technique could offer a more reliable way to detect malaria, says Jongyoon Han, a professor of electrical engineering and biological engineering at MIT.

“There is real potential to make this into a field-deployable system, especially since you don’t need any kind of labels or dye. It’s based on a naturally occurring biomarker that does not require any biochemical processing of samples” says Han, one of the senior authors of a paper describing the technique in the Aug. 31 issue of Nature Medicine.

Peter Rainer Preiser of SMART and Nanyang Technical University in Singapore is also a senior author. The paper’s lead author is Weng Kung Peng, a research scientist at SMART.

With the traditional blood-smear technique, a technician stains the blood with a reagent that dyes cell nuclei. Red blood cells don’t have nuclei, so any that show up are presumed to belong to parasite cells. However, the technology and expertise needed to identify the parasite are not always available in some of the regions most affected by malaria, and technicians don’t always agree in their interpretations of the smears, Han says.

“There’s a lot of human-to-human variation regarding what counts as infected red blood cells versus some dust particles stuck on the plate. It really takes a lot of practice,” he says.

The new SMART system detects a parasitic waste product called hemozoin. When the parasites infect red blood cells, they feed on the nutrient-rich hemoglobin carried by the cells. As hemoglobin breaks down, it releases iron, which can be toxic, so the parasite converts the iron into hemozoin — a weakly paramagnetic crystallite.

Those crystals interfere with the normal magnetic spins of hydrogen atoms. When exposed to a powerful magnetic field, hydrogen atoms align their spins in the same direction. When a second, smaller field perturbs the atoms, they should all change their spins in synchrony — but if another magnetic particle, such as hemozoin, is present, this synchrony is disrupted through a process called relaxation. The more magnetic particles are present, the more quickly the synchrony is disrupted.

“What we are trying to really measure is how the hydrogen’s nuclear magnetic resonance is affected by the proximity of other magnetic particles,” Han says.

For this study, the researchers used a 0.5-tesla magnet, much less expensive and powerful than the 2- or 3-tesla magnets typically required for MRI diagnostic imaging, which can cost up to $2 million. The current device prototype is small enough to sit on a table or lab bench, but the team is also working on a portable version that is about the size of a small electronic tablet.

After taking a blood sample and spinning it down to concentrate the red blood cells, the sample analysis takes less than a minute. Only about 10 microliters of blood is required, which can be obtained with a finger prick, making the procedure minimally invasive and much easier for health care workers than drawing blood intravenously.

“This system can be built at a very low cost, relative to the million-dollar MRI machines used in a hospital,” Peng says. “Furthermore, since this technique does not rely on expensive labeling with chemical reagents, we are able to get each diagnostic test done at a cost of less than 10 cents.”

Hemozoin crystals are produced in all four stages of malaria infection, including the earliest stages, and are generated by all known species of the Plasmodium parasite. Also, the amount of hemozoin can reveal how severe the infection is, or whether it is responding to treatment. “There are a lot of scenarios where you want to see the number, rather than a yes or no answer,” Han says.

In this paper, the researchers showed that they could detect Plasmodium falciparum, the most dangerous form of the parasite, in blood cells grown in the lab. They also detected the parasite in red blood cells from mice infected with Plasmodium berghei.

This new technique is “more sensitive, less error-prone, and requires less blood sample as compared to the standard blood-smear protocol,” says Donhee Ham, a professor of electrical engineering at Harvard University who was not part of the research team. “I think there is a strong potential here, and I look forward to its further development for reliable field deployment.”

The researchers are launching a company to make this technology available at an affordable price. The team is also running field tests in Southeast Asia and is exploring powering the device on solar energy, an important consideration for poor rural areas.

The research was funded by the Singapore National Research Foundation through SMART.

Scientists at the Singapore-MIT Alliance for Research and Technology have discovered a new way to test for malaria using magnets, reports Charlotte Seager of The Guardian. The new method will allow for individual diagnostic tests to be performed for less than 10 cents.

Nicole Skinner writes for Nature about how MIT researchers have developed a new technique to test for malaria. The new method only requires a tiny droplet of blood to check for malaria and can provide a diagnosis within minutes.

MIT zooms in on malaria-infected cells