MIT zooms in on malaria-infected cells 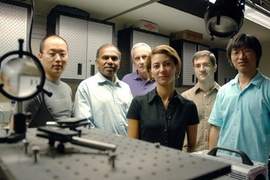 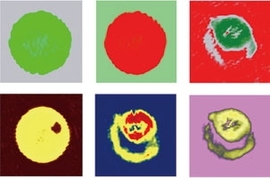 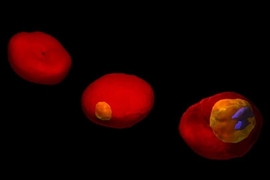 Caption:
3D images of a human red blood cell (RBC) invaded by malaria-inducing parasite Plasmodium falciparum, at different stages of parasite development. The images are based on 3D maps of the refractive index in the cell, recorded by the non-invasive optical technique of Tomographic Phase Microscopy. Healthy RBC exhibits a characteristic biconcave shape (left). During the early stage of parasite maturation (center), the parasitophorus vacuole is shown as yellow region. In the late schizont stage, parasitized RBC is subjected to severe morphological changes (right). The blue regions inside the cell indicate parasite-produced hemozoin, a crystallized form of digested hemoglobin.
Credits:
Image courtesy / YongKeun Park, Michael Feld and Subra Suresh

In work that could lead to new ways of detecting and treating malaria, MIT researchers have used two advanced microscopy techniques to show in unprecedented detail how the malaria parasite attacks red blood cells.

The researchers' images show red blood cell membranes becoming less flexible, which causes the cells to clump as they try to navigate tiny blood vessels. They also show the destruction of hemoglobin, the critical molecule that red blood cells use to carry oxygen.

The images are made possible by microscopy techniques that reveal tiny vibrations in red blood cell membranes.

"By studying the way the cell membrane vibrations progressively change as the malaria parasite matures inside the cell, we can study the changes in its mechanical, elastic and dynamic properties," said Michael Feld, director of MIT's George Harrison Spectroscopy Laboratory and a professor of physics.

Feld and Subra Suresh, dean of MIT's School of Engineering, are senior authors of a paper on the work to be published in the Proceedings of the National Academy of Sciences the week of Sept. 1.

The study establishes the first experimental connection between cell membrane vibration and the pathological state of a living cell.

"You can establish a measurement of membrane-fluctuation changes as a function of the gradual progression from a healthy state to a severely pathological state," said Suresh, who has appointments in materials science and engineering, biological engineering, mechanical engineering and the Harvard-MIT Division of Health Sciences and Technology.

It has been known for more than a century that red blood cell membranes continuously undulate. These vibrations are difficult to study because the measurements involved are so tiny (nanometer, or billionth of a meter, scale), and occur in just microseconds.

Suresh and colleagues have previously shown that the cell membranes of red blood cells invaded by the malaria parasite lose their elasticity, as proteins transported from the parasite attach to the membranes and make them significantly stiffer.

In the new paper, the researchers describe using a technique called diffraction phase microscopy to image living cells over the first 48 hours of malaria parasite maturation inside the cell. They showed that infection reduces elasticity and decreases the vibration frequency of the cell membrane.

The team also used a technique called tomographic phase microscopy, which was developed in Feld's laboratory and is based on the same concept as a CT scan: To create a 3D image, the researchers combine about 100 two-dimensional images taken from different angles. Those images are produced with a technique known as interferometry, in which a light wave passing through a cell is compared with a reference wave that doesn't pass through it.

The technique allowed them to study changes in the refractive index of a cell, which is a measure of how much the speed of light is reduced as it passes through the material.

Images generated by tomographic phase microscopy revealed the degradation of hemoglobin as the malaria parasite interacted with the cell.

In the future, the microscopy technology could be used to develop a diagnostic tool that would detect malaria or other human diseases by measuring cell membrane properties. It could also be used to test the efficacy of potential drugs.

The current project got underway about two years ago, after Suresh gave a talk at the Spectroscopy Laboratory on his work studying the mechanical stiffness of malaria-infected red blood cells. Feld and his colleagues were already working on microscopy techniques to visualize red blood cells, so the groups decided to collaborate.

"This project brought physics, engineering, materials science, and cell biology all to bear on a problem of infectious disease," said Suresh.

Lead authors of the paper are YongKeun Park, a graduate student in the Harvard-MIT Division of Health Sciences and Technology, and Monica Diez-Silva, a microbiologist trained at Institut Pasteur and currently a postdoctoral fellow in the Department of Materials Science and Engineering (DMSE). Other authors are Gabriel Popescu, now at the University of Illinois at Urbana-Champaign; George Lykotrafitis, a DMSE postdoctoral fellow; and Wonshik Choi, a postdoctoral associate in the Spectroscopy Lab.