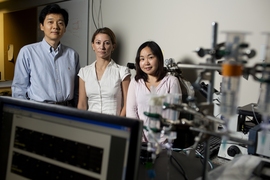 That increased rigidity impairs red blood cells’ ability to travel through the blood vessels, especially at fever temperatures, according to a new study from researchers at MIT, the Institut Pasteur and the Korea Advanced Institute of Science and Technology (KAIST).

This marks the first time that scientists have identified the specific role of the RESA protein in modulating blood circulation in an environment that mimics physiological conditions, and could help researchers determine new strategies to combat malaria, which infects an estimated 300 to 500 million people worldwide each year.

The study — coordinated by MIT’s Ming Dao, a principal research scientist in the Department of Materials Science and Engineering (DMSE); Monica Diez Silva, a research scientist in DMSE; and YongKeun Park, an assistant professor of physics at KAIST — appears Aug. 30 in Scientific Reports, an online journal of Nature.

Other MIT authors are Subra Suresh, former dean of the MIT School of Engineering and Vannevar Bush Professor of Engineering who is currently on leave from MIT serving as the director of the National Science Foundation; Jongyoon Han, an associate professor in the Department of  Electrical Engineering and Computer Science (EECS); Sha Huang, an EECS graduate student; recent PhD recipient Hansen Bow; and the late Michael Feld, professor of physics.

This paper is the culmination of a collaboration between MIT and Institut Pasteur begun in 2004 when Suresh spent a sabbatical in Paris. The new results on dynamic microcirculation significantly extend earlier static experiments by the Suresh lab and the Pasteur team published in 2007, in which they found that RESA makes the red blood cell membrane stiffer than that of a healthy red blood cell by binding to the cell’s internal scaffolding, called the cytoskeleton.

“The new work combines the latest advances in genetics, microfabrication, nanomechanics and computational modeling by bringing together interdisciplinary and international teams,” says Suresh, the senior author of the paper.

When a mosquito carrying the malaria parasite, Plasmodium falciparum, bites a human, the parasite invades the liver, where it divides to produce tens of thousands of merozoites — the form that can infect red blood cells. After several days or weeks, these merozoites are released into the bloodstream.

In the next stage of infection, the merozoites take up residence inside the red blood cells for about 48 hours, producing more copies of themselves. The RESA protein is expressed only during the first 24 hours, which is known as the “ring stage” due to the circular shape of the merozoites. During this stage, RESA “almost singlehandedly” alters the mechanical properties of red blood cell membranes, Dao says.

For the new study, the researchers created a microfluidic system at MIT that allowed them to study how RESA influences malaria-infected cells as they circulate. As cells flow through the microfluidic channels, they encounter narrow openings that are about the same width as the smallest capillaries (about three micrometers, or about 4 percent of the thickness of the human hair). The team found that malaria-infected cells passed through these channels much more slowly than healthy cells, due to the increased rigidity of the cells caused by the RESA protein.

The researchers also studied infected blood cells as they flowed through a microbead filtration system created at the Institut Pasteur. This system, which consists of densely packed tiny spheres, mimics the structure of the human spleen, which filters blood and removes old blood cells.

The researchers also found that RESA’s effects on membrane stiffness and deformability are enhanced at fever temperatures: At these higher temperatures, RESA stabilizes the cell membrane so that it won’t disintegrate. This is advantageous to the parasite because it helps the cell remain intact until the end of the 48-hour cycle, allowing it to produce many more copies of itself.

Mohandas Narla, vice president for research at the New York Blood Center, says the study is impressive and one of very few to look at the effects of temperature on malaria infection.

“Malaria is a very widespread global disease, so there is a lot of research being done on it, but most of the people who study it focus on biophysical measurements without paying attention to the fever part of the story,” says Narla, who was not part of the research team.

During the second 24 hours of the red blood cell infection, when RESA is no longer expressed, the parasite starts producing other proteins that make the cells even more rigid. They also churn out proteins that cause the cells to clump together and stick to the walls of blood vessels. At the end of the 48-hour cycle, the infected red blood cells burst and release new copies of the parasite, which target new cells and start the cycle over again.

Because they are so sticky, infected blood cells can’t reach the spleen during this stage, so there is no chance for them to be filtered out. The new findings suggest that it might be beneficial to seek drugs that boost RESA expression during the first half of the cycle, when cells are still able to get into the spleen, the researchers say. Then, because the cells would be more rigid than typical infected blood cells, the spleen might be able to capture more of them.

The researchers are now further exploring how the spleen interacts with malaria-infected cells. The new microfluidic system used to mimic microcirculation in the small blood vessels is also being further studied as a novel diagnostic tool for detecting malaria and other diseases.

The research was funded by the Singapore-MIT Alliance for Research and Technology Center, the National Institutes of Health, the KAIST Institute for Optical Science and Technology, and the French Agence Nationale de la Recherche.