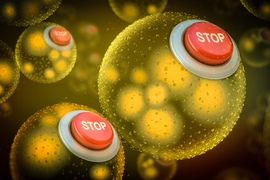 ↓ Download Image
Caption: To prevent genetically modified bacteria from escaping into the wider environment, researchers have developed safeguards in the form of two so-called “kill switches,” which they call “Deadman” and “Passcode.” These kill switches can cause synthetic bacteria to die without the presence of certain chemicals.

Caption:
To prevent genetically modified bacteria from escaping into the wider environment, researchers have developed safeguards in the form of two so-called “kill switches,” which they call “Deadman” and “Passcode.” These kill switches can cause synthetic bacteria to die without the presence of certain chemicals.
Credits:
Image: MIT News

Many research teams are developing genetically modified bacteria that could one day travel around parts of the human body, diagnosing and even treating infection. The bugs could also be used to monitor toxins in rivers or to improve crop fertilization.

However, before such bacteria can be safely let loose, scientists will need to find a way to prevent them from escaping into the wider environment, where they might grow and cause harm.

To this end, researchers at MIT, the Broad Institute of MIT and Harvard, and the Wyss Institute at Harvard University have developed safeguards in the form of two so-called “kill switches,” which can cause the synthetic bacteria to die without the presence of certain chemicals.

In a paper published this week in the journal Nature Chemical Biology, the researchers describe their two kill switches, which they call “Deadman” and “Passcode.”

These include efforts to reprogram the entire genome of the organism to ensure that it requires the presence of certain amino acids or other chemicals in order to survive, divide, and grow.

However, this approach can be both labor- and resource-intensive, and could introduce changes that might make the organism less useful as a monitoring or diagnostic tool, Collins says.

“In our case, we are introducing standalone circuits that can be popped in to any number of different organisms, without needing to rewire or change much of the genome in order for it to accommodate the switch,” he says.

The Deadman switch, for example, is part of a bacterial strain that needs an external chemical to prevent a continuously expressed toxin from killing the cell.

The switch was motivated by the so-called deadman brakes on old trains, which required a conductor to be in constant contact with the handle or pedal in order for the vehicle to move forwards, Collins says.

The system, which builds on previous work in Collin’s lab, consists of a genetic “toggle” switch made up of two transcription factor genes.

“If the system does get flipped, by removing the small molecule, it would express toxins at a very high level that could then quite rapidly and readily kill off the bug,” he says.

The Passcode switch, in contrast, acts like a logic gate in that it requires a specific combination of several chemical inputs in order to enable the genetically modified bacteria to survive and proliferate.

The switch consists of a set of modular transcription factors that contain separate domains for sensing small molecules — the inputs — and for regulating gene expression. By mixing and matching these functional domains, the researchers are able to construct hybrid transcription factors in which different small molecule inputs are linked to the control of a specific promoter for gene expression.

If the transcription factors detect that the right combination of small molecules are present in the environment, then the bacteria will survive. But if the correct combination of input signals is not present, the switch kills the bug, according to the paper’s lead author Clement Chan, a postdoc in Collin’s laboratory.

“If any of the required inputs are not correct, then the bug will die,” he says.

By using different transcription factors, the researchers can change the passcode combination of small molecules needed for the cell to survive. In this way the switches can be easily changed to meet the needs of different applications, Chan says.

“It makes our biocontainment system much more flexible, so you can apply the passcode system in a much wider range of applications.”

The switches could also be used to protect a company’s intellectual property, Chan says.

“Imagine that you own a certain bug, and you don’t want your competitors to use it. Then you could incorporate this device so that only people who know the passcode can use your bug,” he says.

Even if a competitor somehow managed to get hold of the passcode, the researcher could simply change it by using different transcription factors, he says.

The new safeguards have exciting possibilities for scaling kill switches in two important directions, according to Farren Isaacs, an assistant professor in the Systems Biology Institute at Yale University, who was not involved in the research.

“They also expand the passcode switches to a large combination of synthetic molecules and transcription factors for many unique sets of biocontained strains and customized cocktails of synthetic small molecules,” he adds.

Having successfully tested the two kill switches in Escherichia coli, the researchers are now hoping to incorporate them into living diagnostic or therapeutic tools, designed to target a variety of bacterial infections, Collins says.