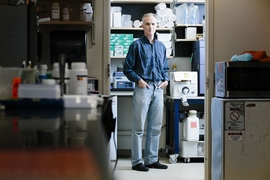 Since arriving at MIT last December, James Collins’ biggest challenge has been finding time to take on all of the research projects that appeal to him.

“It’s truly an embarrassment of riches here in terms of opportunities,” says Collins, the Termeer Professor of Medical Engineering and Science, who joined MIT after 24 years at Boston University. “Kendall Square has such a high density of great institutions and great people. We’re spoiled here. You can just go walk for lunch and bump into world-class scientists.”

Collins, a pioneer in biomedical engineering and synthetic biology, decided to move across the Charles River to become part of MIT’s Institute for Medical Engineering and Science (IMES) and Department of Biological Engineering. Since then, he has also joined forces with the Broad Institute and the Ragon Institute of Harvard, MIT and MGH, which is working to develop HIV vaccines.

He has deployed an army of about 35 young scientists spread among three labs — at MIT, the Broad Institute, and Harvard’s Wyss Institute for Biologically Inspired Engineering — to tackle diverse projects such as combating antibiotic resistance, designing new diagnostic devices, and engineering microbes to help fight disease.

All of these projects build on Collins’ central interest in engineering cells to perform useful functions. “We’re looking to engineer biology by creating synthetic gene circuits that can be used to reprogram and rewire cells,” he says.

Born in New York City, Collins moved to New Hampshire with his family at the age of 10. His father, an aviation engineer, worked on projects for NASA and the military. Collins became interested in medical engineering after both of his grandfathers became disabled: One lost his vision and the other suffered a series of strokes.

“I was struck by the fact that there was all this fantastic technology for shooting stuff into the sky and out of the sky, and little if anything was being done for these guys to restore the functions they had lost,” he says.

After earning an undergraduate degree in physics from the College of the Holy Cross, Collins won a Rhodes Scholarship to study medical engineering at Oxford University.

At Boston University, where he joined the faculty in 1990, Collins studied how people walk, run, and maintain balance, which led to the development of vibrating insoles that help people improve their balance. “We could take a 75-year-old and have them balance as well as a 25-year-old,” he says. He also worked on devices to improve locomotion, neural function, and cardiac function.

In the mid-1990s, colleagues encouraged Collins to try bringing his engineering and physics expertise into the field of molecular biology. He and other pioneers of synthetic biology started trying to design genetic circuits to perform new and useful functions inside cells.

At MIT, he is now engineering viruses and bacteria that can detect and kill harmful organisms such as Vibrio cholerae, which causes cholera, or bacteria that contribute to inflammatory bowel disease. These engineered microbes could also be programmed to attack tumors.

In another project, Collins is working on detaching engineered genetic circuits from living cells. Paper or cloth spotted with cell extracts — consisting of enzymes, ribosomes, nucleic acids, and other cell components — could be used as cheap and rapid programmable diagnostics for diseases including Ebola, Lyme disease, and inflammatory bowel disease, Collins says.

Another key research area in Collins’ lab is systems biology — the computational modeling of the complex interactions within and among living cells. Working with the Center for Microbiome Informatics and Therapeutics at IMES, as well as Graham Walker, an MIT professor of biology, he is trying to figure out the details of how bacteria respond to antibiotics, with an eye toward developing new ways to enhance the performance of existing drugs.

“Our goal is not so much to come up with new standalone antibiotics, but new molecules that could boost the effectiveness of what we have. This would enable us to re-sensitize resistant strains to the antibiotics to which they’ve grown resistant, and to broadly increase the efficacy of our existing antibiotics,” he says.

Collins and colleagues discovered that bacteria’s metabolic state — including how much energy they are using and producing, and whether they are dormant or dividing — has a significant influence on their susceptibility to antibiotics. They have also found that by altering microbes’ metabolic state, they can make them more susceptible to existing antibiotics, especially for persistent infections such as tuberculosis and strep throat.

“This has largely been overlooked by the drug discovery community and the clinical community, but we think it’s a gold mine that can be harnessed to boost our existing arsenal of antibiotics,” Collins says.