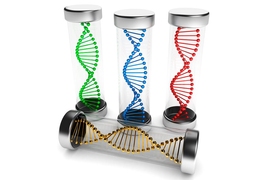 ↓ Download Image
Caption: “This nanoformulation approach allows us to make vaccines against new diseases in only seven days, allowing the potential to deal with sudden outbreaks or make rapid modifications and improvements,” says Daniel Anderson, an associate professor in MIT’s Department of Chemical Engineering and a member of MIT’s Koch Institute for Integrative Cancer Research and Institute for Medical Engineering and Science (IMES).

Caption:
“This nanoformulation approach allows us to make vaccines against new diseases in only seven days, allowing the potential to deal with sudden outbreaks or make rapid modifications and improvements,” says Daniel Anderson, an associate professor in MIT’s Department of Chemical Engineering and a member of MIT’s Koch Institute for Integrative Cancer Research and Institute for Medical Engineering and Science (IMES).
Credits:
Image: MIT News

MIT engineers have developed a new type of easily customizable vaccine that can be manufactured in one week, allowing it to be rapidly deployed in response to disease outbreaks. So far, they have designed vaccines against Ebola, H1N1 influenza, and Toxoplasma gondii (a relative of the parasite that causes malaria), which were 100 percent effective in tests in mice.

The vaccine consists of strands of genetic material known as messenger RNA, which can be designed to code for any viral, bacterial, or parasitic protein. These molecules are then packaged into a molecule that delivers the RNA into cells, where it is translated into proteins that provoke an immune response from the host.

In addition to targeting infectious diseases, the researchers are using this approach to create cancer vaccines that would teach the immune system to recognize and destroy tumors.

“This nanoformulation approach allows us to make vaccines against new diseases in only seven days, allowing the potential to deal with sudden outbreaks or make rapid modifications and improvements,” says Daniel Anderson, an associate professor in MIT’s Department of Chemical Engineering and a member of MIT’s Koch Institute for Integrative Cancer Research and Institute for Medical Engineering and Science (IMES).

Anderson is the senior author of a paper describing the new vaccines in the Proceedings of the National Academy of Sciences the week of July 4. The project was led by Jasdave Chahal, a postdoc at MIT’s Whitehead Institute for Biomedical Research, and Omar Khan, a postdoc at the Koch Institute; both are the first authors of the paper.

Most traditional vaccines consist of an inactivated form of a virus or other pathogen. These vaccines usually take a long time to manufacture, and for some diseases they are too risky. Other vaccines consist of proteins normally produced by the microbe, but these don’t always induce a strong immune response, requiring researchers to seek an adjuvant (a chemical that enhances the response).

RNA vaccines are appealing because they induce host cells to produce many copies of the proteins they encode, which provokes a stronger immune reaction than if the proteins were given on their own. The idea of using messenger RNA molecules as vaccines has been around for about 30 years, but one of the major obstacles has been finding a safe and effective way to deliver them.

Khan decided to package RNA vaccines into a nanoparticle made from a branched molecule known as a dendrimer. One key advantage of this material is that the researchers can give it a temporary positive charge, which allows it to form close associations with RNA, which is negatively charged. Khan can also control the size and pattern of the final structure. By inducing the dendrimer-RNA structure to fold over itself many times, Khan generated spherical vaccine particles with a diameter of about 150 nanometers. That makes them of similar size as many viruses, enabling the particles to enter cells by exploiting the same surface proteins that viruses use for this purpose.

By customizing the RNA sequences, the researchers can design vaccines that produce nearly any protein they want. The RNA molecules also include instructions for amplification of the RNA, so that the cell will produce even more of the protein.

The vaccine is designed to be delivered by intramuscular injection, making it easy to administer. Once the particles get into cells, the RNA is translated into proteins that are released and stimulate the immune system. Significantly, the vaccines were able to stimulate both arms of the immune system — a T cell response and an antibody response.

In tests in mice, animals that received a single dose of one of the vaccines showed no symptoms following exposure to the real pathogen — Ebola, H1N1 influenza, or Toxoplasma gondii.

“No matter what antigen we picked, we were able to drive the full antibody and T cell responses,” Khan says.

The researchers also believe that their vaccines would be safer than DNA vaccines, another alternative that scientists are pursuing, because unlike DNA, RNA cannot be integrated into the host genome and cause mutations.

“The option of rapidly creating a completely synthetic formulation that can be effective as a vaccine is an important addition to currently available vaccine strategies,” says Hidde Ploegh, an MIT professor of biology, a member of the Whitehead Institute, and an author of the paper, who added that it will be important to assess safety and cost.

The ability to rapidly design and manufacture these vaccines could be especially beneficial for fighting influenza, because the most common flu vaccine manufacturing method, which requires the viruses to be grown inside chicken eggs, takes months. This means that when an unexpected flu strain appears, such as the 2009 pandemic-causing H1N1 virus, there is no way to rapidly produce a vaccine against it.

“Typically a vaccine becomes available long after the outbreak is over,” Chahal says. “We think we can become interventional over the course of a real outbreak.”

Joseph Rosen, a professor of surgery at Dartmouth College’s Geisel School of Medicine and adjunct professor of engineering at Dartmouth’s Thayer School of Engineering, describes the new approach to vaccine development as “revolutionary,” because it could dramatically reduce the amount of time needed to respond to disease outbreak.

“This could not only be applicable to the bugs they talked about, but could also be applicable for something even more important, which is an unknown virus,” says Rosen, who was not involved in the research. “In response to a pandemic, whether natural, accidental, or intentional, they could produce a vaccine in a week.”

Khan and Chahal plan to start a company to license and commercialize the technology. In addition to the vaccines they have already designed, they hope to create vaccines for Zika virus and Lyme disease.

They are also working on cancer vaccines. At a recent “Mission: Possible” competition hosted by the Koch Institute, Khan and Chahal were part of a team that ended up withdrawing from the competition because an outside funder, the Advanced Medical Research Foundation, offered to support them.

For that project, the researchers designed vaccines that target genes that are normally turned on only during embryonic development. These genes, dormant in adults, often become reactivated in a type of cancer known as non-small cell lung tumors.

“We are all excited about the potential of this new approach to provide a new way of vaccine delivery,” says Robert Langer, the David H. Koch Institute Professor at MIT and an author of the paper.

The research was funded by the Department of Defense Office of Congressionally Directed Medical Research’s Joint Warfighter Medical Research Program, MediVector Inc., the Ragon Institute of MGH, MIT, and Harvard, and the Defense Threat Reduction Agency/Joint Science and Technology Office program in vaccines and pre-treatments.

MIT researchers have developed a programmable vaccine that could be used to respond to disease outbreaks, reports Ben Gruber for Reuters. The vaccine harnesses “messenger RNA, a genetic material that can be programmed to fight any viral, bacterial or parasitic disease by provoking an amplified immune response.”