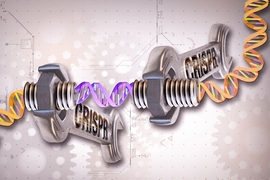 ↓ Download Image
Caption: “This finding really excites us because it makes us think that this is a gene repair system that could be used to treat a range of diseases — not just tyrosinemia but others as well,” Daniel Anderson says.

Caption:
“This finding really excites us because it makes us think that this is a gene repair system that could be used to treat a range of diseases — not just tyrosinemia but others as well,” Daniel Anderson says.
Credits:
Image: Ernesto del Aguila III/NHGRI

The genome-editing technique known as CRISPR allows scientists to clip a specific DNA sequence and replace it with a new one, offering the potential to cure diseases caused by defective genes. For this potential to be realized, however, scientists must find a way to safely deliver the CRISPR machinery and a corrected copy of the DNA into the diseased cells.

MIT researchers have now developed a way to deliver the CRISPR genome repair components more efficiently than previously possible, and they also believe it may be safer for human use. In a study of mice, they found that they could correct the mutated gene that causes a rare liver disorder, in 6 percent of liver cells — enough to cure the mice of the disease, known as tyrosinemia.

“This finding really excites us because it makes us think that this is a gene repair system that could be used to treat a range of diseases — not just tyrosinemia but others as well,” says Daniel Anderson, associate professor in MIT’s Department of Chemical Engineering and a member of MIT’s Koch Institute for Integrative Cancer Research and Institute for Medical Engineering and Science (IMES).

Anderson is one of the senior authors of a paper describing the findings in the Feb. 1 issue of Nature Biotechnology. Wen Xue, an assistant professor in molecular medicine at the University of Massachusetts Medical School, is also a senior author. The paper’s lead author is Hao Yin, a research scientist at the Koch Institute.

The CRISPR system relies on cellular machinery that bacteria use to defend themselves from viral infection. Researchers have previously harnessed this system to create gene-editing complexes composed of a DNA-cutting enzyme called Cas9 and a short RNA that guides the enzyme to a specific area of the genome, directing Cas9 where to make its cut.

In 2014, Anderson and colleagues described the first use of CRISPR to repair a disease gene in an adult animal. In that study, they were able to cure tyrosinemia in mice. However, delivery of the genetic components required a high-pressure injection, a method that can also cause some damage to the liver.

“That was the first demonstration of using CRISPR/Cas9 to do genetic repair in an adult animal,” Anderson says. “We were excited by this demonstration but wanted to find a way to develop a drug form of the repair machinery that would be both safer and more efficient.”

The researchers also wanted to boost the percentage of cells that had the defective gene replaced. In the previous study, about one in 250 liver cells were repaired, which was enough to successfully treat tyrosinemia. However, for many other diseases, a higher percentage of repair would be needed to provide a therapeutic effect.

In the new study, Anderson and colleagues developed a combined nanoparticle and viral delivery system to deliver the CRISPR repair machinery. First, they created a nanoparticle from lipids and messenger RNA (mRNA) that encoded the Cas9 enzyme. The other two components — the RNA guide strand and the DNA for the corrected gene — were embedded into a reprogrammed viral particle based on an adeno-associated virus (AAV).

The researchers first injected the virus about a week before the lipid nanoparticles, giving the liver cells time to begin producing the RNA guide strand and the DNA template. When the nanoparticles carrying the Cas9 mRNA strand were injected, the cells began producing the Cas9 protein, but only for a few days because the mRNA eventually degraded. This is long enough to perform gene repair, but prevents cas9 from lingering in the cells and potentially disrupting other parts of the cells’ genome.

“There’s some concern that if you had Cas9 in your cells for too long of a period of time, it might cause some genomic instability,” Anderson says. “We think the use of the mRNA nanoparticle provides an additional level of safety by making sure the enzyme is not present for too long a period of time.”

With this method, about one in 16 cells had the gene corrected, a 15-fold improvement over the 2014 study. The researchers also found that this approach generated less off-target DNA cutting than methods in which the Cas9 gene is integrated into a cell’s genome.

“This is quite a promising development,” says Terence Flotte, dean of the University of Massachusetts Medical School, who was not part of the research team. “This combination of two different delivery modalities solves a number of hurdles that would otherwise make it difficult to do a gene correction in hepatocytes.”

Anderson’s lab has developed similar lipid nanoparticles that are now in clinical development. AAV viral particles are in clinical trials for other purposes, making the researchers optimistic that this CRISPR delivery method could be used in humans, although more studies are needed.

The researchers have applied for patents on this technique, which they believe could be used to treat wide range of diseases, especially those of the liver. “There are a range of metabolic diseases and other liver disorders where if you fix a mutated gene you might be really able to have an impact on human health,” Anderson says.

“It’s really exciting to see our team develop this new delivery approach for CRISPR, which I believe has the potential to have far-reaching implications,” says Robert Langer, the David H. Koch Institute Professor at MIT and an author of the paper.