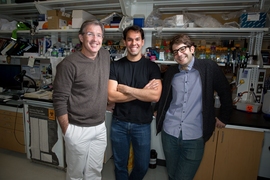 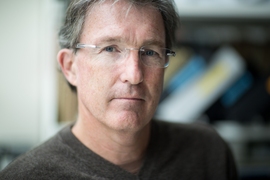 Sequencing the genomes of tumor cells has revealed thousands of genetic mutations linked with cancer. However, sifting through this deluge of information to figure out which of these mutations actually drive cancer growth has proven to be a tedious, time-consuming process.

MIT researchers have now developed a new way to model the effects of these genetic mutations in mice. Their approach, based on the genome-editing technique known as CRISPR, is much faster than existing strategies, which require genetically engineering mice that carry the cancerous mutations.

“It’s a very rapid and very adaptable approach to make models,” says Thales Papagiannakopoulos, a postdoc at MIT’s Koch Institute for Integrative Cancer Research and one of the lead authors of the paper, which appears in the Oct. 22 online edition of Nature. “With a lot of these mutations, we have no idea what their role is in tumor progression. If we can actually understand the biology, we can then go in and try targeted therapeutic approaches.”

This approach could be used to study nearly any gene in many different types of cancer, the researchers say. “There has to be a functional way of assessing the role of these cancer-gene candidates as they appear in sequencing studies,” Sanchez-Rivera says. “The system we developed fills that gap immediately because you can do it very rapidly and very precisely.”

CRISPR, originally discovered by biologists studying the bacterial immune system, involves a set of proteins that bacteria use to defend themselves against bacteriophages (viruses that infect bacteria). One of these proteins, a DNA-cutting enzyme called Cas9, binds to short RNA guide strands that target specific sequences, telling Cas9 where to make its cuts.

Scientists have recently begun exploiting this system to make targeted mutations in the genomes of living animals, either deleting genes or inserting new ones.

To deliver the genes for Cas9 and the RNA guide strand, the MIT team packaged them into viruses called lentiviruses, which can be injected into the target organs of adult mice. This process is much faster than generating mice with mutations inserted at the embryonic stem cell stage, which can take a year or longer.

In this study, the researchers focused on a type of non-small cell lung cancer called lung adenocarcinoma, which accounts for about 40 percent of lung cancers. Jacks’ lab has previously engineered mice that conditionally express the Kras oncogene only in the lung, leading them to develop lung adenocarcinoma.

The researchers administered these mice with lentiviruses targeting three different genes, allowing them to see how each gene cooperates with Kras to influence tumor growth. Once the tumors develop, the researchers can study how aggressive they are, how fast they grow, and how differentiated they are.

Two of the genes modeled in this study, Pten and Nkx2.1, have been extensively studied in lung cancer. The researchers found that the mice in this study developed very similar tumors to those seen previously in mice with those genes deleted using traditional methods.

Modeling APC, a gene whose role in lung cancer is not as well understood, revealed that APC loss also drives tumor progression. Tumors without that gene became much less differentiated and more similar to embryonic cells. To verify these results, the researchers also used mice with APC deleted by traditional methods, and found the same types of tumors.

“This is a wonderful new example of the power of the CRISPR approach,” says Anton Berns, a professor of molecular genetics at the Netherlands Cancer Institute. “It also comes at the right time. The cancer genome sequence initiative provides us with numerous candidate genes that might modulate tumorigenesis, and we need a rapid method to test their contribution. This is precisely what this methodology provides.”

This system could be used in combination with hundreds of existing mouse strains that have been engineered to express known cancer genes, allowing researchers to study more thoroughly the interactions of multiple genes. Jacks’ lab is now investigating the roles of genes associated with other types of lung cancer, such as small cell lung cancer. The viral carrier could also be injected into other types of tissue, including muscle, skin, breast, and brain, to model tumors in those regions, the researchers say.

This method also offers new ways to seek personalized treatments for cancer patients depending on the types of mutations found in their tumors, the researchers say. They envision using this technique to create mice with tumors carrying the same genetic profile as a patient, then testing different drugs on them to see which have the best effect.

“This opens up a whole new field of being able to do personalized oncology where you can model human mutations and start treating tumors based on these mutations,” Papagiannakopoulos says.

The research was funded by the Howard Hughes Medical Institute, the Ludwig Center for Molecular Oncology at MIT, and the National Cancer Institute.