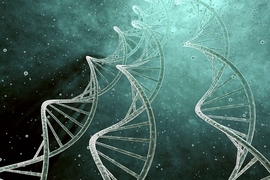 Sequencing the genomes of tumor cells has revealed thousands of mutations associated with cancer. One way to discover the role of these mutations is to breed a strain of mice that carry the genetic flaw — but breeding such mice is an expensive, time-consuming process.

Now, MIT researchers have found an alternative: They have shown that a gene-editing system called CRISPR can introduce cancer-causing mutations into the livers of adult mice, enabling scientists to screen these mutations much more quickly.

In a study appearing in the Aug. 6 issue of Nature, the researchers generated liver tumors in adult mice by disrupting the tumor suppressor genes p53 and pten. They are now working on ways to deliver the necessary CRISPR components to other organs, allowing them to investigate mutations found in other types of cancer.

“The sequencing of human tumors has revealed hundreds of oncogenes and tumor suppressor genes in different combinations. The flexibility of this technology, as delivery gets better in the future, will give you a way to pretty rapidly test those combinations,” says Institute Professor Phillip Sharp, an author of the paper.

CRISPR relies on cellular machinery that bacteria use to defend themselves from viral infection. Researchers have copied this bacterial system to create gene-editing complexes that include a DNA-cutting enzyme called Cas9 bound to a short RNA guide strand that is programmed to bind to a specific genome sequence, telling Cas9 where to make its cut.

In some cases, the researchers simply snip out part of a gene to disrupt its function; in others, they also introduce a DNA template strand that encodes a new sequence to replace the deleted DNA.

To investigate the potential usefulness of CRISPR for creating mouse models of cancer, the researchers first used it to knock out p53 and pten, which protect cells from becoming cancerous by regulating cell growth. Previous studies have shown that genetically engineered mice with mutations in both of those genes will develop cancer within a few months.

Studies of such genetically engineered mice have yielded many important discoveries, but the process, which requires introducing mutations into embryonic stem cells, can take more than a year and costs hundreds of thousands of dollars. “It’s a very long process, and the more genes you’re working with, the longer and more complicated it becomes,” Jacks says.

Using Cas enzymes targeted to cut snippets of p53 and pten, the researchers were able to disrupt those two genes in about 3 percent of liver cells, enough to produce liver tumors within three months.

The researchers also used CRISPR to create a mouse model with an oncogene called beta catenin, which makes cells more likely to become cancerous if additional mutations occur later on. To create this model, the researchers had to cut out the normal version of the gene and replace it with an overactive form, which was successful in about 0.5 percent of hepatocytes (the cells that make up most of the liver).

The ability to not only delete genes, but also to replace them with altered versions “really opens up all sorts of new possibilities when you think about the kinds of genes that you would want to mutate in the future,” Jacks says. “Both loss of function and gain of function are possible.”

Using CRISPR to generate tumors should allow scientists to more rapidly study how different genetic mutations interact to produce cancers, as well as the effects of potential drugs on tumors with a specific genetic profile.

“This is a game-changer for the production of engineered strains of human cancer,” says Ronald DePinho, director of the University of Texas MD Anderson Cancer Center, who was not part of the research team. “CRISPR/Cas9 offers the ability to totally ablate gene function in adult mice. Enhanced potential of this powerful technology will be realized with improved delivery methods, the testing of CRISPR/Cas9 efficiency in other organs and tissues, and the use of CRISPR/Cas9 in tumor-prone backgrounds.”

In this study, the researchers delivered the genes necessary for CRISPR through injections into veins in the tails of the mice. While this is an effective way to get genetic material to the liver, it would not work for other organs of interest. However, nanoparticles and other delivery methods now being developed for DNA and RNA could prove more effective in targeting other organs, Sharp says.