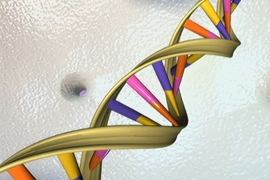 Imagine a scientific technique that would alter the genes of mosquitos to render them unable to transmit malaria. Some day, you may not need to: Scientists have made notable progress in recent years in editing the genomes of organisms, substituting in variants of certain genes; these variants could then propagate throughout a population. While such changes could have benefits — such as limiting malaria transmission — it’s also possible to imagine unintended negative consequences. Kenneth Oye, an associate professor of political science and engineering systems who studies government regulation and directs MIT’s Program on Emerging Technologies, is lead author of an article in Science today making the case that the U.S. government, and international groups, need to adapt their procedures to enable more robust discussion and evaluation in this field. MIT News asked him to discuss the topic.

A. Genes in sexually reproducing organisms typically have a 50 percent chance of being inherited. Some naturally occurring genes have evolved methods of significantly improving these odds: These selfish genes can increase in relative frequency in a population, even while reducing the likelihood that an organism will reproduce. These “gene drives” can spread through an entire population of sexually reproducing animals or plants. The genomes of almost every sexually reproducing species contain either an active gene drive or the broken remnants of gene drives.

Ten years ago, Austin Burt of Imperial College London suggested that gene drives might be purpose-built to alter natural populations by adding, deleting, or editing genes in target species, such as mosquitos. But practical problems — especially the difficulty of precisely editing genomes to create engineered drives — stymied realization of Burt’s vision. This is about to change. The recent development of a powerful genome-editing tool called CRISPR/Cas9, by a team at Harvard University, MIT, and the University of California at Berkeley, allows scientists to insert, replace, delete, or regulate genes in many different species.

The application of CRISPR/Cas9 is likely to enable development of purpose-built gene drives in the next few years. Potential gene-drive applications include reprogramming insects to limit malaria and other insect-borne disease; reversing pesticide and herbicide resistance; and controlling invasive species. Gene drives might even be developed to “undo,” in part, genetic alterations that produce unwanted side effects.

Q. What are some regulatory challenges in dealing with a powerful new technique like this?

Animal applications of gene drives would fall under Food and Drug Administration [FDA] purview as “veterinary medicines.” Current FDA guidance defines genetically engineered DNA constructs intended to affect the structure and function of an animal as veterinary medicines and requires developers to demonstrate that such constructs are safe for the animal. It is not clear how this requirement can be reconciled with projected uses of drives including the local suppression of invasive species.

Or consider a hypothetical security case: In theory, gene drives could be developed to harm populations of commercial animals and plants. However, the development of such gene drives would not fall within the scope of oversight of U.S. policy on Dual Use Research of Concern, which calls for oversight of research with potential security concerns. The shipment of such drives would not be covered by current U.S. export-control regulations or Australia Group guidelines on standardization of national biosecurity export controls. All rely on lists of infectious bacteriological and viral agents to define their operational scope, not sexually reproducing plants and animals.

Finally, the potential environmental effects of gene drives are global. But the U.S. and Canada are not signatories to applicable instruments, including the Cartagena Protocol on biosafety [an international agreement]. And other mechanisms for managing environmental effects are not in place.

The prospective development of gene drives highlights the need for regulatory reassessment and reform at both domestic and international levels.

Q. What do you propose as a better way to address potential risks of this form of genetic engineering?

A. We favor early engagement with risks to provide time for research, regulatory reform, and discussion.

First, our initial take on risks suggests that drives have limited potential to harm humans and that risks to animals and plants will be specific to species and alterations. But this assessment is provisional. Our Science article recommends 10 actions that should be taken in advance of release. These include research to improve understandings of gene-drive properties and effects, measures to address identified risks, and hedges in case our initial assessments are wrong.

Second, security regulations should move beyond lists of infectious bacteriological and viral agents toward a functionally defined approach. The threat posed by select agents is serious and should remain a focus of policy.  However, regulations and conventions constructed to address these threats do not provide a framework for addressing security implications of gene drives and other advanced biotechnologies.

Finally, the idea that discussion of benefits and risks should be tightly controlled is not the right model. The implications of development and use of gene drives extend far beyond the academy. We see our Science article as an open invitation to broader public discussion, not as the last word.

Professor Kenneth Oye speaks with WBUR’s Sacha Pfeiffer about his recent research that details a new way to alter the genomes of organisms and the need for a public discussion about the potential implications and benefits of this new technology.