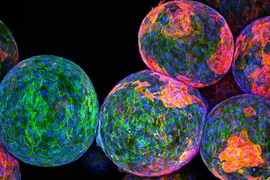 ↓ Download Image
Caption: The sugar polymers that make up the spheres in this image are designed to package and protect specially engineered cells that work to produce drugs and fight disease. While on-site, they must remain undetected by the body’s natural defense system. However, the reddish markers on the spheres’ surfaces indicate that immune cells (blue/green) have discovered these invaders and begun to block them off from the rest of the body. Further experiments with the spheres’ geometry and chemistry will lead to better invisibility cloaking and longer lasting protection for these cell-based factories.

Caption:
The sugar polymers that make up the spheres in this image are designed to package and protect specially engineered cells that work to produce drugs and fight disease. While on-site, they must remain undetected by the body’s natural defense system. However, the reddish markers on the spheres’ surfaces indicate that immune cells (blue/green) have discovered these invaders and begun to block them off from the rest of the body. Further experiments with the spheres’ geometry and chemistry will lead to better invisibility cloaking and longer lasting protection for these cell-based factories.
Credits:
Credit: Andrew Bader, Omid Veiseh, Arturo Vegas, Anderson/Langer Laboratory, Koch Institute at MIT.

Caption:
This image shows an artificial pancreas that could eliminate the routine of pinpricks and injections for type 1 diabetics. In this image, the body has recognized the artificial pancreas as foreign and fibrosis has built up on the device. The pancreatic islet cells are green and located inside the ball of alginate microcapsule. The blue and magenta are the host immune cells that have recognized the material as foreign and are working to wall it off from the body.

Biomedical devices that can be implanted in the body for drug delivery, tissue engineering, or sensing can help improve treatment for many diseases. However, such devices are often susceptible to attack by the immune system, which can render them useless.

A team of MIT researchers has come up with a way to reduce that immune-system rejection. In a study appearing in the May 18 issue of Nature Materials, they found that the geometry of implantable devices has a significant impact on how well the body will tolerate them.

Although the researchers expected that smaller devices might be better able to evade the immune system, they discovered that larger spherical devices are actually better able to maintain their function and avoid scar-tissue buildup.

“We were surprised by how much the size and shape of an implant can affect its triggering of an immune response. What it’s made of is still an important piece of the puzzle, but it turns out if you really want to have the least amount of scar tissue you need to pick the right size and shape,” says Daniel Anderson, the Samuel A. Goldblith Associate Professor in MIT’s Department of Chemical Engineering, a member of MIT’s Koch Institute for Integrative Cancer Research and Institute for Medical Engineering and Science (IMES), and the paper’s senior author.

The researchers hope to use this insight to further develop an implantable device that could mimic the function of the pancreas, potentially offering a long-term treatment for diabetes patients. It could also be applicable to devices used to treat many other diseases.

“I believe the understanding achieved here will help scientists not only move forward on creating better implants to someday treat diabetes, but will also aid in the design of any type of human or animal implant to treat or diagnose disease,” says study author Robert Langer, the David H. Koch Institute Professor at MIT and a member of the Koch Institute, IMES, and the Department of Chemical Engineering.

This study grew out of the researchers’ efforts to build an artificial pancreas, which began several years ago. The goal is to deliver pancreatic islet cells encapsulated within a particle made of alginate — a polysaccharide naturally found in algae — or another material. These implanted cells could replace patients’ pancreatic islet cells, which are nonfunctional in Type I diabetes.

Just like normal islet cells, these cells would sense sugar levels in the blood and secrete the appropriate amount of insulin to absorb the sugar, eliminating the need for insulin injections. However, if scar tissue surrounds the implanted cells, they can’t do their job.

“The purpose of these implantable devices is to protect the cells from the immune system, but allow them to stay alive and continue to function,” Anderson says.

The researchers tested spheres in two sizes — 0.5 and 1.5 millimeters in diameter. In tests of diabetic mice, the spheres were implanted within the abdominal cavity and the researchers tracked their ability to accurately respond to changes in glucose levels. The devices prepared with the smaller spheres were completely surrounded by scar tissue and failed after about a month, while the larger ones were not rejected and continued to function for more than six months.

The larger spheres also evaded the immune response in tests in nonhuman primates. Smaller spheres implanted under the skin were engulfed by scar tissue after only two weeks, while the larger ones remained clear for up to four weeks. “We observed over an order of magnitude fewer immune cells on all surfaces of larger diameter spheres,” Doloff says.

“When we first got this data it was counterintuitive,” Anderson says. “There was reason to think when you have these little small beads they would elicit less of a response, but it just wasn’t the case.”

This effect was seen not only with alginate, but also with spheres made of stainless steel, glass, polystyrene, and polycaprolactone, a type of polyester.

“We realized that regardless of what the composition of the material is, this effect still persists, and that made it a lot more exciting because it’s a lot more generalizable,” Veiseh says.

“What is impressive is that this is a very systematic study,” says Douglas Melton, chair of Harvard University’s Department of Stem Cell and Regenerative Biology, who was not involved in the research. “They compared sizes and shapes and materials in a very systematic way, so it’s very thorough. They came to a nice, simple, and interesting conclusion that one should make spheres of at least 1.5 millimeters in diameter.”

The researchers believe this finding could be applicable to any other type of implantable device, including drug-delivery vehicles and sensors for glucose and insulin, which could also help improve diabetes treatment. Optimizing particle size and shape could also help guide scientists in developing other types of implantable cells for treating diseases other than diabetes.

“For any of these devices that people want to make, it may be important to think carefully about the size and shape of them,” Anderson says.

Taking technology from the lab to the patient