Taking technology from the lab to the patient 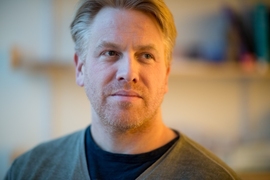 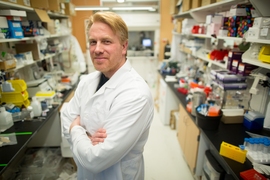 After finishing his PhD in molecular genetics in the late 1990s, Daniel Anderson found himself conflicted about what to do next: He enjoyed science, but wanted to find a way to have a direct impact on human health.

He considered several paths, including pursing an MBA, but ultimately decided to take a postdoctoral research position in David H. Koch Institute Professor Robert Langer’s chemical engineering lab at MIT. He stayed at MIT and built a research program, in collaboration with Langer, for about a decade before launching his own lab at MIT’s Koch Institute for Integrative Cancer Research in 2010.

Anderson now works on developing new materials for medicine — drug delivery in particular — as well as novel treatments for diabetes and other diseases. Along the way, he has become a founder of several companies. “In the long run, I’m glad I didn’t go into industry or business school, because I feel I can have the most impact here at MIT,” says Anderson, who is now the Samuel A. Goldblith Associate Professor of Applied Biology at MIT.

Anderson’s path to running an academic engineering lab began in college, where he double-majored in math and biology at the University of California at Santa Cruz. When he graduated in 1992, he wanted to go into a field where he could have an impact on medicine, so he decided to pursue a PhD at the University of California at Davis, where he studied molecular genetics — in particular, DNA repair mechanisms.

When looking for postdoctoral positions, Anderson, a native of the Bay Area, considered positions at Stanford University and the University of California at San Francisco, but he was also intrigued by Langer’s lab, and by an article Langer had recently written for Nature on drug delivery.

“I came out here for an interview and was very impressed with him and also the culture and excitement of his lab, and so decided to accept a research position here in chemical engineering, despite having no formal training in this field,” Anderson recalls.

Anderson was interested in using his expertise in DNA repair to develop nanoparticles that could repair dysfunctional genes. However, he soon came up against a fundamental challenge: “Even if I had made drugs that could repair DNA, I had to figure out how to get them into the target cells in the body. So I became interested in drug delivery, which is still a major area of interest for me now,” he says.

After finishing his postdoctoral fellowship, Anderson worked with Langer as a research associate, overseeing research on new ways to rapidly develop materials for drug delivery and other medical applications. He then decided to look for a faculty position and found one in the Department of Chemical Engineering at MIT, where he is also a member of the Koch Institute, the Division of Health Science and Technology, and the Institute for Medical Engineering and Science.

In his lab, Anderson continues to study new ways to deliver nucleic acids and other therapeutic agents into cells. Among the promising vehicles are lipid-like materials called lipidoids, which are now in clinical development for the treatment of genetic disease. These hold particular promise for delivery with therapeutic RNA, which works by specifically turning genes off or on. Scientists believe this approach could be used to treat a range of diseases, such as cancer, cystic fibrosis, and Huntington’s disease.

However, for this technique to succeed, scientists need to find ways to effectively deliver RNA to the target cells without causing side effects in healthy tissue. By wrapping RNA in their fatty lipidoid materials, Anderson and colleagues have demonstrated that they can safely and successfully turn off several genes at once with small doses of RNA.

In other recent work, Anderson has been exploring using the new genome-editing system known as CRISPR to correct disease-causing genes in animals. Using this system, which is based on proteins that bacteria use to defend themselves against viruses, scientists hope to be able to replace dysfunctional genes in living cells with the correct ones.

Members of Anderson’s lab are also working to engineer pancreatic tissue for the treatment of diabetes. They have designed new materials to encapsulate the islet cells for transplantation so they won’t be attacked by the host’s immune system. So far, Anderson’s team has been able to cure diabetes for several months in mice; they now plan to test the approach in larger animals.

Anderson wants his technology to have real-world utility, and to this end he has helped to found several companies to advance research started at MIT. “If you want to have an impact in the real world, that’s one of the ways that you do it,” Anderson says. “I think universities are great places for innovating, but you generally reach a stage where making these advances available to the public requires commercial development.”