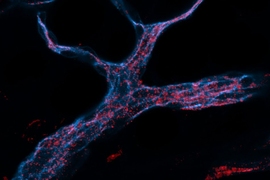 RNA interference (RNAi), a technique that can turn off specific genes inside living cells, holds great potential for treating many diseases caused by malfunctioning genes. However, it has been difficult for scientists to find safe and effective ways to deliver gene-blocking RNA to the correct targets.

Up to this point, researchers have gotten the best results with RNAi targeted to diseases of the liver, in part because it is a natural destination for nanoparticles. But now, in a study appearing in the May 11 issue of Nature Nanotechnology, an MIT-led team reports achieving the most potent RNAi gene silencing to date in nonliver tissues.

Using nanoparticles designed and screened for endothelial delivery of short strands of RNA called siRNA, the researchers were able to target RNAi to endothelial cells, which form the linings of most organs. This raises the possibility of using RNAi to treat many types of disease, including cancer and cardiovascular disease, the researchers say.

“There’s been a growing amount of excitement about delivery to the liver in particular, but in order to achieve the broad potential of RNAi therapeutics, it’s important that we be able to reach other parts of the body as well,” says Daniel Anderson, the Samuel A. Goldblith Associate Professor of Chemical Engineering, a member of MIT’s Koch Institute for Integrative Cancer Research and Institute for Medical Engineering and Science, and one of the paper’s senior authors.

The paper’s other senior author is Robert Langer, the David H. Koch Institute Professor at MIT and a member of the Koch Institute. Lead authors are MIT graduate student James Dahlman and Carmen Barnes of Alnylam Pharmaceuticals.

RNAi is a naturally occurring process, discovered in 1998, that allows cells to control their genetic expression. Genetic information is normally carried from DNA in the nucleus to ribosomes, cellular structures where proteins are made. Short strands of RNA called siRNA bind to the messenger RNA that carries this genetic information, preventing it from reaching the ribosome.

Anderson and Langer have previously developed nanoparticles, now in clinical development, that can deliver siRNA to liver cells called hepatocytes by coating the nucleic acids in fatty materials called lipidoids. Hepatocytes grab onto these particles because they resemble the fatty droplets that circulate in the blood after a high-fat meal is consumed.

“The liver is a natural destination for nanoparticles,” Anderson says. “That doesn’t mean it’s easy to deliver RNA to the liver, but it does mean that if you inject nanoparticles into the blood, they are likely to end up there.”

Scientists have had some success delivering RNA to nonliver organs, but the MIT team wanted to devise an approach that could achieve RNAi with lower doses of RNA, which could make the treatment more effective and safer.

The new MIT particles consist of three or more concentric spheres made of short chains of a chemically modified polymer. RNA is packaged within each sphere and released once the particles enter a target cell.

A key feature of the MIT system is that the scientists were able to create a “library” of many different materials and quickly evaluate their potential as delivery agents. They tested about 2,400 variants of their particles in cervical cancer cells by measuring whether they could turn off a gene coding for a fluorescent protein that had been added to the cells. They then tested the most promising of those in endothelial cells to see if they could interfere with a gene called TIE2, which is expressed almost exclusively in endothelial cells.

With the best-performing particles, the researchers reduced gene expression by more than 50 percent, for a dose of only 0.20 milligrams per kilogram of solution — about one-hundredth of the amount required with existing endothelial RNAi delivery vehicles. They also showed that they could block up to five genes at once by delivering different RNA sequences.

“What’s interesting is that by changing the chemistry of the nanoparticle you can affect delivery to different parts of the body, because the other formulations we’ve worked on are very potent for hepatocytes but not so potent for endothelial tissues,” Anderson says.

To demonstrate the potential for treating lung disease, the researchers used the nanoparticles to block two genes that have been implicated in lung cancer — VEGF receptor 1 and Dll4, which promote the growth of blood vessels that feed tumors. By blocking these in lung endothelial cells, the researchers were able to slow lung tumor growth in mice and also reduce the spread of metastatic tumors.

Masanori Aikawa, an associate professor of medicine at Harvard Medical School, describes the new technology as “a monumental contribution” that should help researchers develop new treatments and learn more about diseases of endothelial tissue such as atherosclerosis and diabetic retinopathy, which can cause blindness.

“Endothelial cells play a very important role in multiple steps of many diseases, from initiation to the onset of clinical complications,” says Aikawa, who was not part of the research team. “This kind of technology gives us an extremely powerful tool that can help us understand these devastating vascular diseases.”

The researchers plan to test additional potential targets in hopes that these particles could eventually be deployed to treat cancer, atherosclerosis, and other diseases.

Scientists from Alnylam Pharmaceuticals and Harvard Medical School also contributed to the study, which was funded by a National Defense Science and Engineering Fellowship, the National Science Foundation, MIT Presidential Fellowships, the National Institutes of Health, the Stop and Shop Pediatric Brain Tumor Fund, the Pediatric Brain Tumour Fund, the Deutsche Forschungsgemeinschaft, Alnylam, and the Center for RNA Therapeutics and Biology.