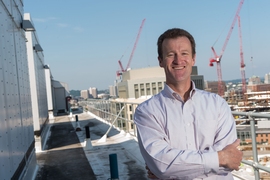 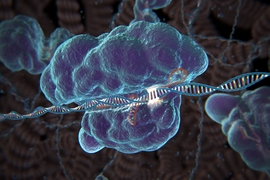 ↓ Download Image
Caption: Using CRISPR, researchers can make changes to a cell’s genome much more easily and with greater precision than they can with other methods.

Caption:
Using CRISPR, researchers can make changes to a cell’s genome much more easily and with greater precision than they can with other methods.

Last week, the U.S. Patent Trial and Appeal Board issued an important decision in a dispute over intellectual property rights to the powerful gene-editing system known as CRISPR. Using this system, researchers can make changes to a cell’s genome more easily and with greater precision than they can with other approaches. The method has great potential to advance our understanding of the biology and treatment of human disease.

The Broad Institute and MIT hold several foundational CRISPR-related patents based on research led by Feng Zhang, who is the James and Patricia Poitras Professor in Neuroscience at the McGovern Institute for Brain Research at MIT and a core member of the Broad Institute. Zhang is also an associate professor in MIT’s Department of Brain and Cognitive Sciences with a joint appointment in the Department of Biological Engineering.

The University of California at Berkeley has also filed CRISPR-based patent applications, stemming from research led by by Jennifer Doudna of UC Berkeley and Emmanuelle Charpentier, who is currently the director of the Max Planck Institute for Infection Biology in Berlin. UC Berkeley and Charpentier asked the U.S. Patent Trial and Appeal Board to declare a “patent interference” to determine who was the first to invent key CRISPR inventions, suggesting that certain claims identified by UC Berkeley in its application were to the same invention as the claims in the Broad Institute’s patents.

The Board’s Feb. 15 decision means that the Zhang patents will remain in place, although UC Berkeley is weighing its options, including the possibility of an appeal to the Federal Circuit. MIT News talked with Charles Jennings, director of the McGovern Institute Neurotechnology Program, who also oversees communcations at the Institute, to learn more about the decision and its implication for gene-editing research.

Q: What is CRISPR, and what research is being done at MIT and the Broad Institute?

A: CRISPR is a naturally occurring system by which bacteria and other microorganisms fight viral infections. CRISPR systems, such as CRISPR-Cas9 and CRISPR-Cpf1, have been harnessed as powerful and efficient tools for genome editing, with far-reaching implications for biology and medicine.

Feng Zhang, a leading pioneer in this work, and his group submitted a paper reporting genome editing in mammalian cells (including human and mouse cells), using two different CRISPR-Cas9 systems from different bacterial species to target multiple genes in the cells’ genomes. This paper, which appeared in Science on Jan. 3, 2013 (Cong et al., 2013) is now the most cited paper in the genome-editing field. Since initiating this work, which began in early 2011 soon after Zhang started as a new assistant professor, his group has continued to develop the CRISPR-Cas9 system for genome editing in eukaryotic cells. The researchers have also explored the natural diversity of CRISPR systems, which allowed them to discover new systems with advantageous properties distinct from those of CRISPR-Cas9.

Many other groups at MIT (along with thousands of other labs worldwide) are now using Zhang’s CRISPR-related tools, which he has made widely available for academic research via the Addgene website, where they have been requested more than 37,000 times.

Q: What did the U.S. Patent and Trademark Office rule on Feb. 15?

A: Zhang and his colleagues have been awarded more than 13 patents for their CRISPR-related work, which is focused primarily on the use of CRISPR in eukaryotic cells. After the first of Zhang’s patents were awarded, UC Berkeley suggested a patent proceeding known as an interference be declared, arguing that Zhang’s invention was the same as their pending claims.

On Feb. 15, the Patent Trial and Appeal Board (which is part of the U.S. Patent and Trademark Office) granted Broad's motion for no-interference-in-fact, rejecting UC Berkeley's arguments.

MIT welcomes this decision, which confirms that the patents and applications of the Broad Institute and MIT for use of CRISPR in eukaryotic cells are patentably distinct from the biochemical experiments in test tubes in the UC Berkeley filing. The Patent Trial and Appeal Board (PTAB) confirmed that Zhang’s work, which began in 2011, represents a new invention that was not obvious from the prior work of Doudna, Charpentier, and colleagues, which was confined to results in a test tube. Specifically, in the words of the PTAB decision, “one of ordinary skill in the art would not have reasonably expected a CRISPR-Cas9 system to be successful in a eukaryotic environment.”

Q: How will this decision influence gene-editing research moving forward?

A: The Broad Institute and MIT are committed to making the CRISPR technology widely available for both academic and commercial use, including human therapeutic applications. The Broad Institute, which manages Feng Zhang’s CRISPR-related intellectual property (IP) on behalf of both institutions, has developed what we have termed an “inclusive innovation” model for licensing CRISPR-related IP, in order to maximize the public benefit of this groundbreaking technology. The PTAB decision of Feb. 15 does not alter our policy, and we expect that genome-editing research will continue to move forward rapidly, with potentially transformative benefits for many fields including basic and disease-related research, agriculture, and medicine.