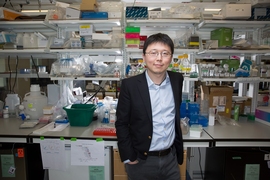 Researchers from MIT and the Broad Institute of MIT and Harvard, as well as the National Institutes of Health, Rutgers University at New Brunswick, and the Skolkovo Institute of Science and Technology, have characterized a new CRISPR system that targets RNA, rather than DNA.

The new approach has the potential to open a powerful avenue in cellular manipulation. Whereas DNA editing makes permanent changes to the genome of a cell, the CRISPR-based RNA-targeting approach may allow researchers to make temporary changes that can be adjusted up or down, and with greater specificity and functionality than existing methods for RNA interference.

In a study published today in Science, Feng Zhang and colleagues at the Broad Institute and the McGovern Institute for Brain Research at MIT, along with co-authors Eugene Koonin and his colleagues at the NIH, and Konstantin Severinov of Rutgers University at New Brunswick and Skoltech, report the identification and functional characterization of C2c2, an RNA-guided enzyme capable of targeting and degrading RNA.

The findings reveal that C2c2 — which is the first naturally occurring CRISPR system known to target only RNA, and was discovered by this collaborative group in October 2015 — helps protect bacteria against viral infection. The researchers demonstrate that C2c2 can be programmed to cleave particular RNA sequences in bacterial cells, which would make it an important addition to the molecular biology toolbox.

The RNA-focused action of C2c2 complements the CRISPR-Cas9 system, which targets DNA, the genomic blueprint for cellular identity and function. The ability to target only RNA, which helps carry out the genomic instructions, offers the ability to specifically manipulate RNA in a high-throughput manner — and to manipulate gene function more broadly. This has the potential to accelerate progress to understand, treat, and prevent disease.

“C2c2 opens the door to an entirely new frontier of powerful CRISPR tools,” said senior author Feng Zhang, who is a core institute member of the Broad Institute, an investigator at the McGovern Institute for Brain Research at MIT, and the W. M. Keck Career Development Associate Professor in MIT’s Department of Brain and Cognitive Sciences.

“There are an immense number of possibilities for C2c2, and we are excited to develop it into a platform for life science research and medicine.”

“The study of C2c2 uncovers a fundamentally novel biological mechanism that bacteria seem to use in their defense against viruses,” said Eugene Koonin, senior author and leader of the Evolutionary Genomics Group at the NIH. “Applications of this strategy could be quite striking.”

Currently, the most common technique for performing gene knockdown is small interfering RNA (siRNA). According to the researchers, C2c2 RNA-editing methods suggest greater specificity and hold the potential for a wider range of applications, such as:

In this work, the team was able to precisely target and remove specific RNA sequences using C2c2, lowering the expression level of the corresponding protein. This suggests C2c2 could represent an alternate approach to siRNA, complementing the specificity and simplicity of CRISPR-based DNA editing and offering researchers adjustable gene “knockdown” capability using RNA.

C2c2 has advantages that make it suitable for tool development:

“C2c2’s greatest impact may be made on our understanding of the role of RNA in disease and cellular function,” said co-first author Omar Abudayyeh, a graduate student in the Zhang Lab.

MIT researchers have discovered that a bacterium found in the human mouth can be used to form a new CRISPR gene-editing system that can target RNA, reports Carl Zimmer for The New York Times. The development “may open up a new front in gene engineering, gaining the ability to precisely adjust the proteins in cells, for instance, or to target cancer cells."

New Scientist reporter Colin Barras writes that MIT researchers have found they can program C2c2, an enzyme found in bacteria, to serve as an RNA-editing tool. Barras writes that the tool “promises to transform our understanding of RNA’s role in our growth and development, and provide a new avenue for treating infectious diseases and cancer.”