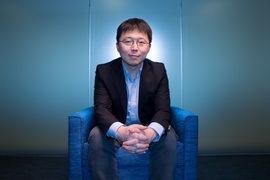 Feng Zhang, a core institute member of the Broad Institute, an investigator at the McGovern Institute for Brain Research at MIT, and W. M. Keck Career Development Associate Professor in MIT’s Department of Brain and Cognitive Sciences, has been named a recipient of the 2016 Canada Gairdner International Award — Canada’s most prestigious scientific prize — for his role in developing the CRISPR-Cas9 gene-editing system.

In January 2013 Zhang and his team were first to report CRISPR-based genome editing in mammalian cells, in what has become the most-cited paper in the CRISPR field. He is one of five scientists the Gairdner Foundation is honoring for work with CRISPR. Zhang shares the award with Rodolphe Barrangou from North Carolina State University; Emmanuelle Charpentier of the Max Planck Institute; Jennifer Doudna of the University of California at Berkeley and Phillipe Horvath from DuPont Nutrition and Health.

“The Gairdner Award is a tremendous recognition for my entire team, and it is a great honor to share this recognition with other pioneers in the CRISPR field,” Zhang says. “In the next decade, the understanding and the discoveries that scientists are going to be able to make using the CRISPR-Cas9 system will lead to new innovations that will translate into new therapeutics and new products that can benefit our lives.”

Although Zhang is well-known for his work with CRISPR, the 34-year-old scientist has a long track record of innovation. As a graduate student at Stanford University, Zhang worked with Karl Deisseroth and Edward Boyden, who is now also a professor at MIT, to develop optogenetics, in which neuronal activity can be controlled with light. The three shared the Perl-UNC Prize in Neuroscience in 2012 as recognition of these efforts. Zhang has also received the National Science Foundation’s Alan T. Waterman Award (2014), the Jacob Heskel Gabbay Award in Biotechnology and Medicine (2014, shared with Charpentier and Doudna), the Tsuneko & Reiji Okazaki Award (2015), and the Human Genome Organization (HUGO) Chen New Investigator Award (2016).

One of Zhang’s long-term goals is to use genome-editing technologies to better understand the nervous system and develop new approaches to the treatment of psychiatric disease. The Zhang lab has shared CRISPR-Cas9 components in response to nearly 30,000 requests from academic laboratories around the world and has trained thousands of researchers in the use of CRISPR-Cas9 genome-editing technology through in-person events and online opportunities. In his current research, he continues to improve and expand the gene-editing toolbox. “I feel incredibly fortunate and excited to work with an incredible team of students and postdocs to continue advancing our ability to edit and understand the genome,” Zhang says.

“CRISPR is a revolutionary breakthrough that will advance the frontiers of science and enable us to meet the health challenges of the 21st century in ways we are only beginning to imagine,” says Michael Sipser, dean of MIT's School of Science and the Barton L. Weller Professor of Mathematics. “I am exceedingly proud of the contributions Feng has made to MIT and the greater community of scientists, and extend my heartfelt congratulations to him and his colleagues.”

“CRISPR is a great example of how the scientific community can come together and make stunning progress in a short period of time,” says Eric Lander, founding director of the Broad Institute. “On behalf of my colleagues at the Broad and MIT, I wish to congratulate Feng and all the winners of this prestigious award, as well as the teams of scientists and all others who have contributed to these transformational discoveries.”

The Canada Gairdner International Awards, created in 1959, are given annually to recognize and reward the achievements of medical researchers whose work contributes significantly to the understanding of human biology and disease. The awards provide a $100,000 (CDN) prize to each scientist for their work. Each year, the five honorees of the International Awards are selected after a rigorous two-part review, with the winners voted by secret ballot by a medical advisory board composed of 33 eminent scientists from around the world.

The Broad Institute of MIT and Harvard was launched in 2004 to empower this generation of creative scientists to transform medicine. The Broad Institute seeks to describe all the molecular components of life and their connections; discover the molecular basis of major human diseases; develop effective new approaches to diagnostics and therapeutics; and disseminate discoveries, tools, methods, and data openly to the entire scientific community.

Founded by MIT, Harvard, Harvard-affiliated hospitals, and the visionary Los Angeles philanthropists Eli and Edythe L. Broad, the Broad Institute includes faculty, professional staff, and students from throughout the MIT and Harvard biomedical research communities and beyond, with collaborations spanning over a hundred private and public institutions in more than 40 countries worldwide. For further information about the Broad Institute, visit: http://www.broadinstitute.org.

Prof. Feng Zhang has been named a recipient of the 2016 Canada Gairdner International Award for his work on the development of the CRISPR gene-editing system, reports CBC News. CRISPR "may prove to be a ‘powerful therapeutic’ for treating human diseases by editing out harmful genetic mutations.”

Globe and Mail reporter Ivan Semeniuk spotlights Prof. Feng Zhang and his role in developing the CRISPR-Cas9 gene-editing system, for which he was honored as a recipient of the 2016 Canada Gairdner International award. “CRISPR genome editing technology is a really powerful platform,” says Zhang. “It think it will advance both our ability to understand disease and to develop treatments.”

Full story via Globe and Mail →