Approaching human cognition from many angles 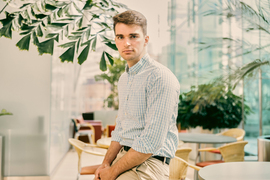 ↓ Download Image
Caption: “Coming to MIT, I knew I wanted to do something philosophical. But I wanted to also be on the more technical side of things,” says Keith Murray, a senior double majoring in computation and cognition, and linguistics and philosophy.
Credits: Photo: Jared Charney 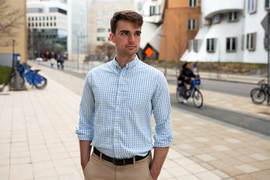 Caption:
“Coming to MIT, I knew I wanted to do something philosophical. But I wanted to also be on the more technical side of things,” says Keith Murray, a senior double majoring in computation and cognition, and linguistics and philosophy.
Credits:
Photo: Jared Charney

In January, as the Charles River was starting to freeze over, Keith Murray and the other members of MIT’s men’s heavyweight crew team took to erging on the indoor rowing machine. For 80 minutes at a time, Murray endured one of the most grueling workouts of his college experience. To distract himself from the pain, he would talk with his teammates, covering everything from great philosophical ideas to personal coffee preferences.

For Murray, virtually any conversation is an opportunity to explore how people think and why they think in certain ways. Currently a senior double majoring in computation and cognition, and linguistics and philosophy, Murray tries to understand the human experience based on knowledge from all of these fields.

“I’m trying to blend different approaches together to understand the complexities of human cognition,” he says. “For example, from a physiological perspective, the brain is just billions of neurons firing all at once, but this hardly scratches the surface of cognition.”

Murray grew up in Corydon, Indiana, where he attended the Indiana Academy for Science, Mathematics, and Humanities during his junior year of high school. He was exposed to philosophy there, learning the ideas of Plato, Socrates, and Thomas Aquinas, to name a few. When looking at colleges, Murray became interested in MIT because he wanted to learn about human thought processes from different perspectives. “Coming to MIT, I knew I wanted to do something philosophical. But I wanted to also be on the more technical side of things,” he says.

Once on campus, Murray immediately pursued an opportunity through the Undergraduate Research Opportunity Program (UROP) in the Digital Humanities Lab. There he worked with language-processing technology to analyze gendered language in various novels, with the end goal of displaying the data for an online audience. He learned about the basic mathematical models used for analyzing and presenting data online, to study the social implications of linguistic phrases and expressions.

Murray also joined the Concourse learning community, which brought together different perspectives from the humanities, sciences, and math in a weekly seminar. “I was exposed to some excellent examples of how to do interdisciplinary work,” he recalls.

In the summer before his sophomore year, Murray took a position as a researcher in the Harnett Lab, where instead of working with novels, he was working with mice. Alongside postdoc Lucas Fisher, Murray trained mice to do navigational tasks using virtual reality equipment. His goal was to explore neural encoding in navigation, understanding why the mice behaved in certain ways after being shown certain stimuli on the screens. Spending time in the lab, Murray became increasingly interested in neuroscience and the biological components behind human thought processes.

He sought out other neuroscience-related research experiences, which led him to explore a SuperUROP project in MIT’s Computer Science and Artificial Intelligence Laboratory (CSAIL). Working under Professor Nancy Lynch, he designed theoretical models of the retina using machine learning. Murray was excited to apply the techniques he learned in 9.40 (Introduction to Neural Computation) to address complex neurological problems. Murray considers this one of his most challenging research experiences, as the experience was entirely online.

“It was during the pandemic, so I had to learn a lot on my own; I couldn’t exactly do research in a lab. It was a big challenge, but at the end, I learned a lot and ended up getting a publication out of it,” he reflects.

This past semester, Murray has worked in the lab of Professor Ila Fiete in the McGovern Institute for Brain Research, constructing deep-learning models of animals performing navigational tasks. Through this UROP, which builds on his final project from Fiete’s class 9.49 (Neural Circuits for Cognition), Murray has been working to incorporate existing theoretical models of the hippocampus to investigate the intersection between artificial intelligence and neuroscience.

Reflecting on his varied research experiences, Murray says they have shown him new ways to explore the human brain from multiple perspectives, something he finds helpful as he tries to understand the complexity of human behavior.

Outside of his academic pursuits, Murray has continued to row with the crew team, where he walked on his first year. He sees rowing as a way to build up his strength, both physically and mentally. “When I’m doing my class work or I’m thinking about projects, I am using the same mental toughness that I developed during rowing,” he says. “That’s something I learned at MIT, to cultivate the dedication you put toward something. It’s all the same mental toughness whether you apply it to physical activities like rowing, or research projects.”

Looking ahead, Murray hopes to pursue a PhD in neuroscience, looking to find ways to incorporate his love of philosophy and human thought into his cognitive research. “I think there’s a lot more to do with neuroscience, especially with artificial intelligence. There are so many new technological developments happening right now,” he says.