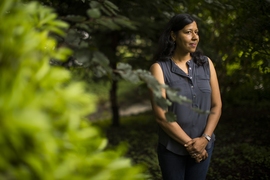 ↓ Download Image
Caption: Ila Fiete, a professor of brain and cognitive sciences at MIT, uses computational and mathematical techniques to study how the brain encodes information in ways that enable cognitive tasks such as learning, memory, and neural representation of our surroundings.
Credits: Photo: Adam Glanzman 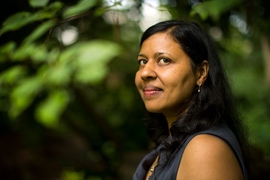 ↓ Download Image
Caption: Ila Fiete, a professor of brain and cognitive sciences at MIT, uses computational and mathematical techniques to study how the brain encodes information in ways that enable cognitive tasks such as learning, memory, and neural representation of our surroundings.
Credits: Photo: Adam Glanzman

Caption:
Ila Fiete, a professor of brain and cognitive sciences at MIT, uses computational and mathematical techniques to study how the brain encodes information in ways that enable cognitive tasks such as learning, memory, and neural representation of our surroundings.
Credits:
Photo: Adam Glanzman

“It wasn’t really a field,” she recalls. “That has changed completely, and [now] there are 15 to 20 openings advertised per year.” She ended up finding a position in the Center for Learning and Memory at the University of Texas at Austin, which along with a small handful of universities including MIT, was open to neurobiologists with a computational background.

Computation is the cornerstone of Fiete’s research at MIT’s McGovern Institute for Brain Research, where she has been a faculty member since 2018. Using computational and mathematical techniques, she studies how the brain encodes information in ways that enable cognitive tasks such as learning, memory, and reasoning about our surroundings.

One major research area in Fiete’s lab is how the brain is able to continuously compute the body’s position in space and make constant adjustments to that estimate as we move about.

“When we walk through the world, we can close our eyes and still have a pretty good estimate of where we are,” she says. “This involves being able to update our estimate based on our sense of self-motion. There are also many computations in the brain that involve moving through abstract or mental rather than physical space, and integrating velocity signals of some variety or another. Some of the same ideas and even circuits for spatial navigation might be involved in navigating through these mental spaces.”

Fiete spent her childhood between Mumbai, India, and the United States, where her mathematician father held a series of visiting or permanent appointments at the Institute for Advanced Study in Princeton, NJ, the University of California at Berkeley, and the University of Michigan at Ann Arbor.

In India, Fiete’s father did research at the Tata Institute of Fundamental Research, and she grew up spending time with many other children of academics. She was always interested in biology, but also enjoyed math, following in her father’s footsteps.

“My father was not a hands-on parent, wanting to teach me a lot of mathematics, or even asking me about how my math schoolwork was going, but the influence was definitely there. There’s a certain aesthetic to thinking mathematically, which I absorbed very indirectly,” she says. “My parents did not push me into academics, but I couldn’t help but be influenced by the environment.”

She spent her last two years of high school in Ann Arbor and then went to the University of Michigan, where she majored in math and physics. While there, she worked on undergraduate research projects, including two summer stints at Indiana University and the University of Virginia, which gave her firsthand experience in physics research. Those projects covered a range of topics, including proton radiation therapy, the magnetic properties of single crystal materials, and low-temperature physics.

“Those three experiences are what really made me sure that I wanted to go into academics,” Fiete says. “It definitely seemed like the path that I knew the best, and I think it also best suited my temperament. Even now, with more exposure to other fields, I cannot think of a better fit.”

Although she was still interested in biology, she took only one course in the subject in college, holding back because she did not know how to marry quantitative approaches with biological sciences. She began her graduate studies at Harvard University planning to study low-temperature physics, but while there, she decided to start explore quantitative classes in biology. One of those was a systems biology course taught by then-MIT professor Sebastian Seung, which transformed her career trajectory.

“It was truly inspiring,” she recalls. “Thinking mathematically about interacting systems in biology was really exciting. It was really my first introduction to systems biology, and it had me hooked immediately.”

She ended up doing most of her PhD research in Seung’s lab at MIT, where she studied how the brain uses incoming signals of the velocity of head movement to control eye position. For example, if we want to keep our gaze fixed on a particular location while our head is moving, the brain must continuously calculate and adjust the amount of tension needed in the muscles surrounding the eyes, to compensate for the movement of the head.

After earning her PhD, Fiete and her husband, a theoretical physicist, went to the Kavli Institute for Theoretical Physics at the University of California at Santa Barbara, where they each held fellowships for independent research. While there, Fiete began working on a research topic that she still studies today — grid cells. These cells, located in the entorhinal cortex of the brain, enable us to navigate our surroundings by helping the brain to create a neural representation of space.

Midway through her position there, she learned of a new discovery, that when a rat moves across an open room, a grid cell in its brain fires at many different locations arranged geometrically in a regular pattern of repeating triangles. Together, a population of grid cells forms a lattice of triangles representing the entire room. These cells have also been found in the brains of various other mammals, including humans.

“It’s amazing. It’s this very crystalline response,” Fiete says. “When I read about that, I fell out of my chair. At that point I knew this was something bizarre that would generate so many questions about development, function, and brain circuitry that could be studied computationally.”

One question Fiete and others have investigated is why the brain needs grid cells at all, since it also has so-called place cells that each fire in one specific location in the environment. A possible explanation that Fiete has explored is that grid cells of different scales, working together, can represent a vast number of possible positions in space and also multiple dimensions of space.

“If you have a few cells that can parsimoniously generate a very large coding space, then you can afford to not use most of that coding space,” she says. “You can afford to waste most of it, which means you can separate things out very well, in which case it becomes not so susceptible to noise.”

Since returning to MIT, she has also pursued a research theme related to what she explored in her PhD thesis — how the brain maintains neural representations of where the head is located in space. In a paper published last year, she uncovered that the brain generates a one-dimensional ring of neural activity that acts as a compass, allowing the brain to calculate the current direction of the head relative to the external world.

Her lab also studies cognitive flexibility — the brain’s ability to perform so many different types of cognitive tasks.

“How it is that we can repurpose the same circuits and flexibly use them to solve many different problems, and what are the neural codes that are amenable to that kind of reuse?” she says. “We’re also investigating the principles that allow the brain to hook multiple circuits together to solve new problems without a lot of reconfiguration.”

How the brain switches between different sets of rules