Caption:
MIT researchers have found a circuit of thousands of neurons in the mammalian brain (blue) traces out a one-dimensional ring during complex navigation behaviors. “In the absence of this ring,” explains Associate Professor Ila Fiete, “we would be lost in the world.”
Credits:
Image: Ila Fiete

Caption:
A circuit of thousands of neurons in the mammalian brain traces out a spare one-dimensional ring during complex navigation behaviors, representing an internal compass.
Credits:
Image: Ila Fiete

The world is constantly bombarding our senses with information, but the ways in which our brain extracts meaning from this information remains elusive. How do neurons transform raw visual input into a mental representation of an object — like a chair or a dog?

In work published in Nature Neuroscience, MIT neuroscientists have identified a brain circuit in mice that distills “high-dimensional” complex information about the environment into a simple abstract object in the brain.

“There are no degree markings in the external world; our current head direction has to be extracted, computed, and estimated by the brain,” explains Ila Fiete, an associate member of the McGovern Institute and senior author of the paper. “The approaches we used allowed us to demonstrate the emergence of a low-dimensional concept, essentially an abstract compass in the brain.”

This abstract compass, according to the researchers, is a one-dimensional ring that represents the current direction of the head relative to the external world. 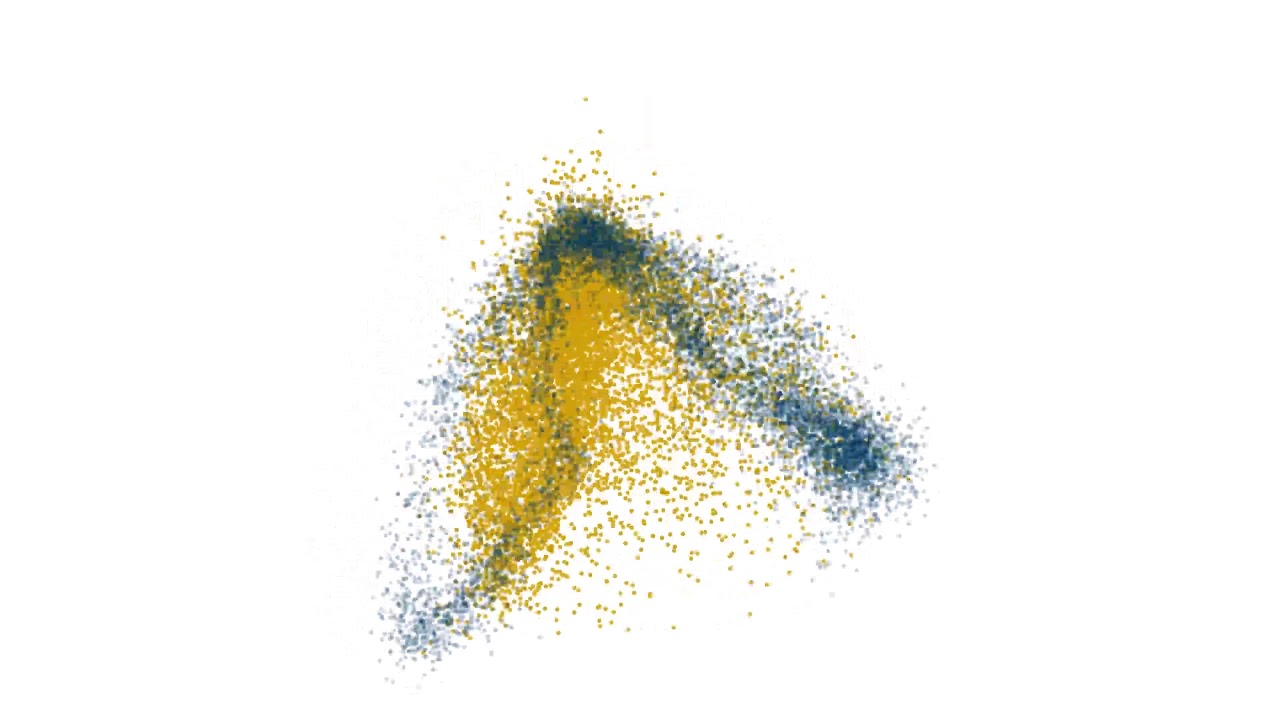 Play video
A circuit of thousands of neurons in the mammalian brain traces out a spare one-dimensional ring during complex navigation behaviors in 3-D space (blue), representing an internal compass. At any time, the circuit state is one dot along the compass, representing the present estimated direction of heading in the external world. During deep, non-REM sleep (yellow), the circuit traces out the same ring, but scaled differently in size, to define a whole cone.

Trying to show that a data cloud has a simple shape, like a ring, is a bit like watching a school of fish. By tracking one or two sardines, you might not see a pattern. But if you could map all of the sardines, and transform the noisy dataset into points representing the positions of the whole school of sardines over time, and where each fish is relative to its neighbors, a pattern would emerge. This model would reveal a ring shape, a simple shape formed by the activity of hundreds of individual fish.

Fiete, who is also an associate professor in MIT’s Department of Brain and Cognitive Sciences, used a similar approach, called topological modeling, to transform the activity of large populations of noisy neurons into a data cloud in the shape of a ring.

Previous work in fly brains revealed a physical ellipsoid ring of neurons representing changes in the direction of the fly’s head, and researchers suspected that such a system might also exist in mammals.

In this new mouse study, Fiete and her colleagues measured hours of neural activity from scores of neurons in the anterodorsal thalamic nucleus (ADN) — a region believed to play a role in spatial navigation — as the animals moved freely around their environment. They mapped how the neurons in the ADN circuit fired as the animal’s head changed direction.

Together, these data points formed a cloud in the shape of a simple and persistent ring.

“This tells us a lot about how neural networks are organized in the brain,” explains Edvard Moser, director of the Kavli Institute of Systems Neuroscience in Norway, who was not involved in the study. “Past data have indirectly pointed towards such a ring-like organization, but only now has it been possible, with the right cell numbers and methods, to demonstrate it convincingly,” says Moser.

Their method for characterizing the shape of the data cloud allowed Fiete and colleagues to determine which variable the circuit was devoted to representing, and to decode this variable over time, using only the neural responses.

“The animal’s doing really complicated stuff,” explains Fiete, “but this circuit is devoted to integrating the animal’s speed along a one-dimensional compass that encodes head direction. Without a manifold approach, which captures the whole state space, you wouldn’t know that this circuit of thousands of neurons is encoding only this one aspect of the complex behavior, and not encoding any other variables at the same time.”

Even during sleep, when the circuit is not being bombarded with external information, this circuit robustly traces out the same one-dimensional ring, as if dreaming of past head-direction trajectories.

Further analysis revealed that the ring acts an attractor. If neurons stray off trajectory, they are drawn back to it, quickly correcting the system. This attractor property of the ring means that the representation of head direction in abstract space is reliably stable over time, a key requirement if we are to understand and maintain a stable sense of where our head is relative to the world around us.

“In the absence of this ring,” Fiete explains, “we would be lost in the world.”

Fiete’s work provides a first glimpse into how complex sensory information is distilled into a simple concept in the mind, and how that representation autonomously corrects errors, making it exquisitely stable.

But the implications of this study go beyond coding of head direction.

“Similar organization is probably present for other cognitive functions, so the paper is likely to inspire numerous new studies,” says Moser.

Fiete sees these analyses and related studies carried out by colleagues at the Norwegian University of Science and Technology, Princeton University, the Weitzman Institute, and elsewhere as fundamental to the future of neural decoding studies.

With this approach, she explains, it is possible to extract abstract representations of the mind from the brain, potentially even thoughts and dreams.

“We’ve found that the brain deconstructs and represents complex things in the world with simple shapes,” explains Fiete. “Manifold-level analysis can help us to find those shapes, and they almost certainly exist beyond head-direction circuits.”

How we tune out distractions