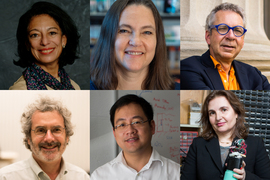 Six MIT faculty members have been elected as fellows of the American Association for the Advancement of Science (AAAS).

The new fellows are among a group of 489 AAAS members elected by their peers in recognition of their scientifically or socially distinguished efforts to advance science.

A virtual induction ceremony for the new fellows will be held on Feb. 13, 2021.

Catherine Drennan is a professor in the departments of Biology and Chemistry. Her research group seeks to understand how nature harnesses and redirects the reactivity of enzyme metallocenters in order to perform challenging reactions. By combining X-ray crystallography with other biophysical methods, the researchers’ goal is to “visualize” molecular processes by obtaining snapshots of enzymes in action.

Peter Fisher is a professor in the Department of Physics and currently serves as department head. He carries out research in particle physics in the areas of dark matter detection and the development of new kinds of particle detectors. He is also interested in compact energy supplies and wireless energy transmission.

Neil Gershenfeld is the director of MIT's Center for Bits and Atoms, which works to break down boundaries between the digital and physical worlds, from pioneering quantum computing to digital fabrication to the “internet of things.” He is the founder of a global network of over 1,000 fab labs, chairs the Fab Foundation, and leads the Fab Academy.

Ju Li is the Battelle Energy Alliance Professor of Nuclear Science and Engineering and a professor of materials science and engineering. He studies how atoms and electrons behave and interact, to inform the design new materials from the atomic level on up. His research areas include overcoming timescale challenges in atomistic simulations, energy storage and conversion, and materials in extreme environments and far from equilibrium.

Daniela Rus is the Andrew and Erna Viterbi Professor of Electrical Engineering and Computer Science and director of the Computer Science and Artificial Intelligence Laboratory (CSAIL) at MIT. Her research interests include robotics, mobile computing, and data science. Rus is a Class of 2002 MacArthur Fellow, a fellow of ACM, AAAI and IEEE, and a member of the National Academy of Engineering, and the American Academy for Arts and Science.

This year’s fellows will be formally announced in the AAAS News and Notes section of Science on Nov. 27.