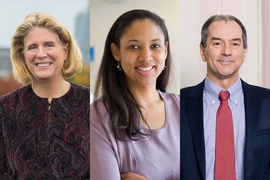 Three current MIT faculty members have been elected as fellows of the American Association for the Advancement of Science (AAAS).

The new fellows are among a group of 416 AAAS members elected by their peers in recognition of their scientifically or socially distinguished efforts to advance science. This year’s fellows will be honored at a ceremony on Feb. 16, 2019, at the AAAS Annual Meeting in Washington.

Jacqueline N. Hewitt is the Julius A. Stratton Professor in Electrical Engineering and Physics in the Department of Physics, and the director of the Kavli Institute for Astrophysics and Space Research. In her academic work, she applies the techniques of radio astronomy, interferometry, and image processing to basic research in astrophysics and cosmology. Hewitt has been recognized by AAAS for her leadership of MIT's Kavli Institute as well as her notable contributions to the study of gravitational lenses.

Kristala L.J. Prather is the Arthur D. Little Professor of Chemical Engineering and a co-director of the MIT Energy Initiative’s Low-Carbon Energy Center for Energy Bioscience Research. Her research focuses on designing new ways to engineer bacteria to synthesize useful chemical compounds such as drugs and biofuels. She has been recognized for her “distinguished contributions to the design and assembly of recombinant microorganisms for the production of small molecules using synthetic biology.”

John H. Lienhard is the Abdul Latif Jameel Professor of Water and Food and the director of the Abdul Latif Jameel Water and Food Systems Lab (J-WAFS). His research group in the Department of Mechanical Engineering investigates heat and mass transfer, thermodynamics, and fluid dynamics. Lienhard has been recognized by AAAS for his “distinguished contributions to thermal science and engineering, particularly for developing energy efficient desalination technologies, influential textbooks, and jet impingement cooling at high heat flux.”

This year’s fellows will be formally announced in the AAAS News and Notes section of Science on Nov. 29.