Dorothy Hosler and John Sterman are among those recognized for their efforts to advance science.
MIT News Office
Publication Date:
Press Inquiries 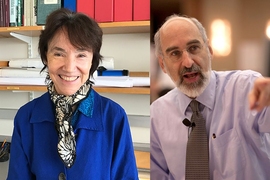 ↓ Download Image
Caption: Dorothy Hosler and John D. Sterman have been elected as fellows of the American Association for the Advancement of Science (AAAS).

Caption:
Dorothy Hosler and John D. Sterman have been elected as fellows of the American Association for the Advancement of Science (AAAS).

Two current MIT faculty members have been elected as fellows of the American Association for the Advancement of Science (AAAS).

The new fellows are among a group of 396 AAAS members elected by their peers in recognition of their scientifically or socially distinguished efforts to advance science. This year’s fellows will be honored at a ceremony on Feb. 17, 2018, at the AAAS Annual Meeting in Austin, Texas.

Dorothy Hosler is professor of archaeology and ancient technology in the Department of Materials Science and Engineering. Her research incorporates the tools of materials engineering and geoscience to investigate materials processing technologies in the ancient Americas. She demonstrates that the transfer of metallurgy from Andean to Mesoamerican societies, whereas the invention of rubber was uniquely Mesoamerican. She has been recognized by AAAS for her “distinguished contributions to integration of materials science and social theory for understanding ancient technologies and what they indicate about social aspects of ancient societies.”

John D. Sterman is the Jay W. Forrester Professor of Management at the MIT Sloan School of Management and a professor in the MIT Institute for Data, Systems, and Society. He is also the director of the MIT System Dynamics Group and the MIT Sloan Sustainability Initiative. He has been recognized for his “distinguished contributions to improving decision-making in complex systems, including corporate strategy and operations, energy policy, public health, environmental sustainability, and climate change.”

This year’s fellows will be formally announced in the AAAS News and Notes section of Science on Nov. 24.

A good many years before Goodyear

Climate negotiation role-play in Paris feels like the real thing