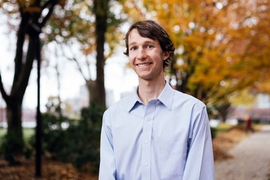 Pharmaceutical companies spend a lot of time testing potential drugs, and they end up wasting  much of that effort on candidates that don’t pan out. Kyle Swanson wants to change that.

A master’s student in computer science and engineering, Swanson is working on a project that involves feeding a computer information about chemical compounds that have or have not worked as drugs in the past. From this input, the machine “learns” to predict which kinds of new compounds have the most promise as drug candidates, potentially saving money and time otherwise spent on testing. Several prominent companies have already adopted the software as their new model.

“Our model is never going to be perfect … but the hope is that by doing this prediction phase first, the molecules that they actually test in the lab have a much higher chance of being viable drugs,” says Swanson, who graduated from MIT in 2018 with a BS in computer science and engineering, a BS in mathematics, and a minor in music.

Swanson’s overall aim is to use his skills in computer science and machine learning for real-world science applications. He’ll work toward that goal as a Marshall Scholar for the next two years, attending Cambridge University to pursue a pair of master’s degrees, one in mathematical statistics and the other in computational biology.

“I think the ultimate goal is to do something very similar to what I’m doing right now,” he says. “I feel like it’s a great mix of doing interesting computer science research and pushing the field of machine learning forward, while also having practical applications in the sciences.”

Swanson’s first experience researching medical applications for machine learning was as an undergraduate in the lab of Regina Barzilay, the Delta Electronics Professor in the Computer Science and Artificial Intelligence Laboratory and the Department of Electrical Engineering and Computer Science. Swanson worked on a system designed to identify the presence of breast cancer from mammogram images. While the original goal of cancer detection proved to be difficult, the tool was successful at a related task. The algorithm is still used to analyze mammogram images, but rather than identifying cancer, it identifies whether patients are at greater risk for cancer, depending on the density of their breast tissue.

While he was already interested in machine learning, Swanson entered cancer research for a very personal reason. One day, he noticed he had a little cough, which he attributed to catching a cold from his roommate. But while his roommate’s cough subsided, Swanson’s didn’t. Walking home one night a few weeks later, he found a lump above his collarbone. It turned out to be Hodgkin’s lymphoma.

“My approach is to try and laugh it off as much as possible. I feel like if I were to take it seriously, it would just be so awful I wouldn’t be able to handle it,” Swanson says. “I mean, obviously there were times when I actually was very distraught about the whole thing. … The way I’ve tried to handle it is just to be as positive as possible.”

He asked to join Barzilay’s lab not only because he found her research important, but also because she’d been through a similar scare with breast cancer. He felt that she understood what he was going through. Even now, as he’s working on that pharmaceutical machine learning project, she is still his advisor.

“She’s been a role model for the kind of person I want to be both professionally and personally, and I hope that one day I can be in a similar position, making a real difference in the lives of others through my research,” he says.

A symphony for all seasons

Swanson first went to music school in Scarsdale, New York, when he was 2 years old. He picked up the flute in third grade, and later the piccolo. With many hours of practice, he became a skilled classical musician. He’s been in the MIT Symphony Orchestra for five straight years, and he’s played in a number of other ensembles as well.

“The great thing about MIT is that I’ve been able to continue that interest. …The music program here is really excellent,” Swanson says. “I’ve enjoyed all the classes I’ve taken, and the ensembles are great as well.”

His favorite experience in the music department is one to be rivaled. His first-year roommate, Bertrand Stone, also a mathematics major and musician, is a very talented composer. Before the summer of 2016, Swanson joked that Stone should use some of his free time outside of class to write a flute piece for him. When he returned in the fall, Stone handed him a 135-page, fully composed 20-minute flute concerto. Stone had already shown the piece to the MIT symphony conductor for input during the composition process, and Swanson was asked to perform it with the orchestra.

“That was my favorite by far,” Swanson says.

Music still takes up most of Swanson’s free time. But when he’s not practicing on some sort of woodwind, he enjoys pounding the pavement with MIT’s Running Club and spending time with friends. His undergraduate fraternity, Alpha Epsilon Pi, is still a big part of his life. He met many of his closest friends there, including one of his current roommates, and they played a key supportive role for him when he was wrestling with cancer.

“They’re just some of the smartest and nicest people I know on campus,” Swanson says.

A master of degrees

By the time Swanson leaves Cambridge, he’ll have three master’s degrees. “Really, I want to just have a better understanding of the fields that I’m going to be applying machine learning to,” he says.

As for his future after that, he’s not exactly sure. He will most likely go back to school for a PhD, and then he’ll decide if he wants to enter industry or academia. The important thing for him is that he’s applying his knowledge of machine learning to science that has a real impact on human lives.

“If I were to keep doing what I’m doing right now, I think I would be very happy. I love machine learning and I love the way it can do such amazing things,” he says. “But I also specifically like seeing the difference that I’m making in the world.”