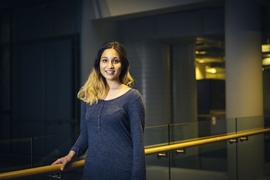 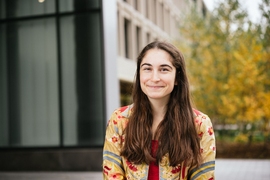 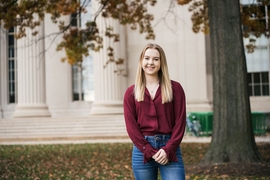 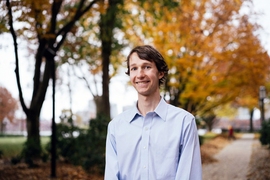 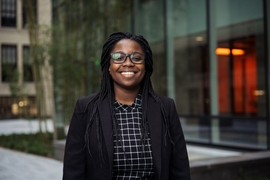 Five MIT students — Radha Mastandrea, Kathryn O’Nell, Anna Sappington, Kyle Swanson ’18, and Crystal Winston — have been awarded Marshall Scholarships to pursue graduate studies in the United Kingdom. This class represents the largest number of Marshall Scholars from the Institute in a single year, and continues MIT students’ exceptional record of achievement in this elite fellowship program.

Funded by the British government, the Marshall Scholarship provides outstanding young Americans with the opportunity to earn advanced degrees in any academic subject at any university in the United Kingdom. Scholars are chosen through a rigorous national competition that assesses academic merit, leadership, and ambassadorial potential. Approximately 40 Marshall Scholarships are granted each year.

The MIT students were guided by Kimberly Benard, assistant dean of distinguished fellowships within MIT Career Advising and Professional Development, and by the Presidential Committee on Distinguished Fellowships co-chaired by professors Rebecca Saxe and Will Broadhead. “Working with students like our Marshall Scholars is one of the great pleasures and privileges of teaching at MIT,” says Saxe. “Every year I’m impressed by how hard all of the finalists work to develop and communicate their distinctive vision for the future and their place in it.”

“MIT’s five Marshall Scholars, Radha, Katie, Anna, Kyle, and Crystal, are extraordinary; they are intelligent, creative, and dedicated to making a better world,” says MIT Chancellor Cynthia Barnhart. “Together, they make up an eighth of the entire class of 2019 Marshall Scholars, a remarkable accomplishment that would not have been possible without the hard work and passion of these students; the incredible efforts of professors Broadhead and Saxe and the entire Presidential Committee for Distinguished Fellowships; and the staff who work around the clock to support all applicants through this demanding process. We are fortunate that our 2019 Marshall Scholars have such exciting opportunities to look forward to, and that they will be representing the MIT community to the world.”

Hailing from Westwood, Massachusetts, Mastandrea is an MIT senior double-majoring in physics and mathematics. She is headed to Cambridge, where she will study theoretical and experimental physics before returning to the U.S. to undertake a PhD in high-energy particle physics. She aims for a career in academia as a researcher and an advocate for open data.

As an undergraduate researcher with Professor Jesse Thaler at the MIT Center for Theoretical Physics, Mastandrea has been using machine learning to analyze a trove of open data from the CERN Large Hadron Collider to gain insight on quarks and gluons. Mastandrea has also conducted research on galaxy spectral emission data with Professor Michael McDonald at the MIT Kavli Institute for Astrophysics and Space Research, and neutrinoless double beta decays with Professor Lindley Winslow at the MIT Laboratory for Nuclear Science. During a summer internship at Caltech, she researched black holes with the Laser Interferometer Gravitational-wave Observatory (LIGO) Scientific Collaboration.

Mastandrea is committed to championing women in physics. As president of MIT’s Undergraduate Women in Physics, she has established connections between undergraduates and older role models to showcase women’s accomplishments in the physics field. She has mentored local high school girls by leading physics exploration days on the MIT campus, and she helped write the MIT physics department’s first community values statement to foster a culture of respect and support. Mastandrea is also co-captain of MIT Bhangra and has taught bhangra dance classes to members of the local community.

O’Nell, from San Diego, California, is an MIT senior majoring in brain and cognitive sciences. At Oxford University, she will pursue an MS in the Department of Experimental Psychology. She will then return to the U.S. to embark on doctoral studies in computational neuroscience with the goal of becoming a professor and researcher.

O’Nell is currently conducting studies on facial perception in the laboratories of Professor Rebecca Saxe in MIT’s Department of Brain and Cognitive Sciences and Professor Stefano Anzellotti of Boston College. O’Nell has also been examining the connection between gestures and speech with the MIT Speech Communication Group, and she has created calcium imaging processing pipelines in the laboratory of Professor Ann Graybiel at the McGovern Institute for Brain Research at MIT. O’Nell spent two summers interning at the J. Craig Venter Institute, which conducts genomic and bioinformatics research.

On campus, O’Nell is an associate advisor to first-year students and a member of the associate advisor steering committee. She is active with the MIT Model UN Conference for high school students and serves as special political and decolonization committee chair. She also mentors high school students as a Splash instructor for the MIT Educational Studies Program and as president of the MIT Academic Teaching Initiative. As campus engagement chair for the MIT Addir Interfaith Program, O’Nell plans and promotes campus-wide events, including an upcoming interfaith hackathon. O’Nell originated and oversees the popular murder mystery-themed puzzle hunt for her residence hall, MacGregor House.

A native of Riva, Maryland, Sappington will graduate this spring with a BS in computer science and molecular biology. She will earn master’s degrees in machine learning at University College London and medical sciences in oncology at the Cambridge University. She will then pursue an interdisciplinary career as a physician-scientist using computer science to improve precision medicine.

As an undergraduate researcher at the laboratory of Professor Aviv Regev in MIT’s Department of Biology and the Broad Institute of MIT and Harvard, Sappington has been developing machine-learning techniques to improve cell type classification for the Human Cell Atlas Initiative. She has also conducted research on hepatitis B virus infection in the laboratory of Professor Sangeeta Bhatia in the Department of Electrical Engineering and Computer Science and the Koch Institute for Integrative Cancer Research. Sappington has held summer research internships at the National Institutes of Health in Bethesda, Maryland, and as an Amgen Scholar at Kyoto University, Japan. In 2018, she was named a national Barry M. Goldwater Scholar and an MIT Burchard Scholar.

Sappington served as the Director of TechX, which hosts world-renowned events such as HackMIT. She is co-president of the MIT Biology Undergraduate Student Association, a teaching assistant for the biology department, and a peer health counselor and former residential director for MIT MedLinks. A talented dancer, Sappington has performed with MIT DanceTroupe and the MIT Asian Dance Team. For the past two years, she has volunteered for the Massachusetts General Hospital department of radiation oncology.

As an undergraduate, Swanson worked with Professor Regina Barzilay in MIT’s Computer Science and Artificial Intelligence Laboratory (CSAIL) and Constance Lehman in the Breast Imaging Division of Massachusetts General Hospital on machine learning to improve breast cancer detection in mammography, and recently co-authored a paper published in Radiology.

Swanson’s master’s research with Barzilay focuses on machine learning for chemistry. He is currently developing machine-learning algorithms to predict molecular properties such as toxicity or solubility, with the hope of developing a property-prediction tool that can accelerate drug discovery. Swanson previously conducted research on cybersecurity at CSAIL. He has interned at Microsoft and other companies and taught machine learning to university students in Kazakhstan.

An accomplished musician, Swanson plays flute and piccolo with the MIT Symphony Orchestra where he has served as president. He is active with the music service club Ribotones, which performs concerts at nursing homes, and he has played with MIT’s Chamber Music Society and Wind Ensemble. Swanson has received multiple MIT awards recognizing his musical talent and scholarship.

Winston, from Charlotte, North Carolina, is an MIT senior majoring in mechanical engineering. At Imperial College, Winston will embark on a PhD in aerospace materials and structures to further develop her skills in redesigning transportation systems. Her goal is to start a company that transforms transportation technology.

As a sophomore, Winston co-invented a remote-controlled four-wheeled robot that converts into a flying drone, which won first place in a campus project exhibition. She has continued to refine this project and hopes it can eventually be used to reduce traffic congestion by transporting people on ground or through the air.

Winston has conducted research on a robot for detecting and repairing pipe leaks, at the MIT Mechatronics Research Laboratory. As a mechanical engineering intern at Google, she designed and programmed systems for the cameras on Google Maps Streetview cars, and at the NASA Jet Propulsion Laboratory she designed and prototyped an animal-inspired foot for the Europa Lander. She has been a mechanical team member for the MIT Solar Electric Vehicle Team, and helped design and manufacture an electric solar car for the 2017 Formula Sun Grand Prix.

Winston is dedicated to her work with the National Society of Black Engineers (NSBE) where she has held several executive positions. As an engineering immersion program mentor with NSBE, she helps local underrepresented minority high school students prepare for STEM careers. Winston is a member of the Tau Beta Pi and Pi Tau Sigma engineering honors societies.