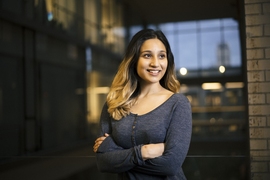 ↓ Download Image
Caption: Radha Mastandrea wants to know what the universe is made of.
Credits: Image: Ian MacLellan 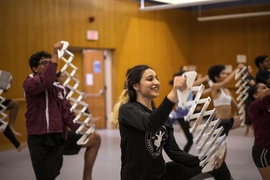 Caption:
Radha Mastandrea wants to know what the universe is made of.
Credits:
Image: Ian MacLellan

Radha Mastandrea wants to know what the universe is made of.

Mastandrea’s research is largely dependent on data, which she gets from CERN’s Large Hadron Collider in Switzerland. The scientists at CERN, the European Organization for Nuclear Research, will smash two protons together, which will generate a number of quarks and gluons. Every such particle then “showers” into a stream of other particles — these streams are called quark jets, or gluon jets (depending on the particle they showered from). Mastandrea then sifts through heaps of raw data about these jets, and uses the information to learn more about the particles they came from.

Professor Allan Adams, a former recitation instructor of Mastandrea’s, suggested she describe her current work “as if we were slamming two clocks together and we get two elephants out.” The clocks are protons — when they’re slammed together, the quark jets that result aren’t necessarily what researchers would have predicted.

Part of what makes Mastandrea’s research challenging is that data from CERN are organized in a way that works well for researchers there, but are difficult to sort through for scientists outside of CERN who may not understand how the data are structured.

To be sure, Mastandrea applauds CERN for making its data open to everyone; she’s passionate about the ability of open data to further research around the globe. However, she and her labmates have developed a GitHub tool that extracts important information from CERN’s data and puts it in a text file that’s easier for labs outside CERN to interpret. They plan to make that framework public. She used a grant she received from the Heising-Simons Foundation to expand computing resources for this project.

Before using CERN’s data, Mastandrea primarily worked with simulations. During her first year at MIT she began studying emissions at the 21-centimeter line, which is named after the wavelength of energy hydrogen atoms emit when after they undergo a certain energy change. That summer, she studied neutrinoless double beta decays under Lindley Winslow, the Jerrold R. Zacharias Career Development Assistant Professor of Physics at MIT.

Mastandrea’s time at Caltech, with the Laser Interferometer Gravitational-wave Observatory (LIGO) in the summer after her sophomore year, provided a change of pace. There, she helped the LIGO team simulate black hole mergers, and was on the ground floor during some of the crucial discoveries that led to LIGO’s monumental paper on gravitational waves from neutron star mergers — experiences that made for “the most exciting summer.” But at the time, the LIGO team still hadn’t collected quite enough data from actual black hole mergers to run in the simulation she was working on. For Mastandrea, using the data from CERN in her current research is particularly exciting and meaningful.

“It feels like a true physics analysis. … I’m actually investigating the world, not just the fake world that I generate,” she says.

Dancing out of the lab

Mastandrea had never tried the Indian dance form called bhangra before coming to college. She’d played the trumpet for a long time, and she figured she would keep playing as an out-of-lab outlet. In time, though, she discovered she wasn’t enjoying it as much as she’d hoped. She decided to try something new.

“I was just surprised by how much fun it was,” she says, describing how she joined MIT’s bhangra dance team. “The people I met were so friendly.”

Mastandrea says that dancing is “a different kind of stress” than her work in the lab. Bhangra is no casual exercise — it’s high-energy and a little exhausting — but for Mastandrea, a co-captain of the team, it’s more rewarding than it is strenuous.

“The whole dance is meant to be an expression of joy,” she says. “It’s meant to engage people, and you have to make people not only love watching you, but you have to make them want to join you when you’re done. It’s definitely an amazing experience.”

When she’s not bringing joy through dance, she’s experiencing it through food — she loves to cook. She has a profound adoration for tomatoes — she’ll bite into them like they’re apples, she admits with a grin. One day, she says, she’d love to take time off and attend culinary school. For now, though, she gets her fill of cooking entertainment from Food Network’s “Cutthroat Kitchen,” in which chefs foil each other’s plans as they vie for dominance.

“Throwing yourself into a hugely different part of your life”

On the humanities side of her education, one of Mastandrea’s favorite parts of MIT is the philosophy department.

“From what I can tell … they make a real effort to engage undergraduates and make things interesting, and also just to talk with them. They’re very accessible, and that’s great when the problems that philosophy covers are so broad and require this discussion,” she says.

She’s also currently enrolled in a playwriting class. She gives credit to the theater department for creating such a unique experience for MIT students.

“Everyone I see is so passionate about science … and then I go here [to a theater class]. … I see the same passion about something completely different, throwing yourself into a hugely different part of your life, and … casting yourself out and trying something new. There’s no better way to do that than with the theater classes.”

In addition to classes, there are many individuals she is grateful to have met at MIT. She credits her research advisor, Jesse Thaler, and Lindley Winslow, who is both the advisor for the Undergraduate Women in Physics group (which Mastandrea is president of) and Mastandrea’s former research advisor, with helping transform her “from a person who studies physics, who takes physics classes, to someone who … is beginning to think and research with the mindset of a physicist.” Her academic advisor, Michael McDonald, has also been an important resource to her throughout her time here.

After graduating, Mastandrea plans to continue her education in graduate school and wants to keep researching. Maybe her work will lead her toward an answer to the ultimate question — what makes up the universe as we know it.