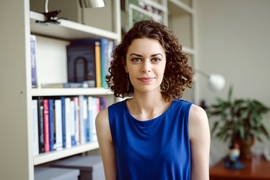 ↓ Download Image
Caption: “I found diaries from 7th grade where I asked a whole stream of questions about the universe and the ‘edge of the universe’ and its expansion,” says senior Talia Weiss. 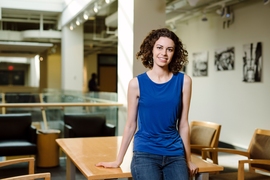 ↓ Download Image
Caption: When nuclear physicist and professor emeritus Lee Grodzins heard senior Talia Weiss and her partner were recreating one of his 1950’s experiments, he visited them at the Junior Lab. “[H]e was so enthusiastic that he graciously visited to assist us with our theoretical and experimental questions,” she says. “That’s a very MIT-like experience — one you can’t find in many other places.”

Caption:
“I found diaries from 7th grade where I asked a whole stream of questions about the universe and the ‘edge of the universe’ and its expansion,” says senior Talia Weiss.

In the eighth grade, in response to being asked what she wanted to be when she grew up, Talia Weiss critically examined her aspirations and gathered them into one succinct statement: “I wanted to be a writer, dancer, and an astrophysicist,” she recalls. Weiss, now an MIT senior majoring in physics, can comfortably say she’s stuck to her goals, save for a little variation.

During her time at MIT, Weiss’ diverse interests — in physics, political science, and theater — have ultimately converged; she is now on mission to help close the gap between scientific and political thinkers, including scientists and policymakers in government.

Before arriving at MIT, where her interest in political science developed, Weiss spent her teenage years pursuing a passion for physics. “I found diaries from 7th grade where I asked a whole stream of questions about the universe and the ‘edge of the universe’ and its expansion,” she says.

She also looked for answers, spending time on Wikipedia researching black holes, the physical world, and the nature of the universe. Her curiosity led her to spend her high school summers at Northwestern University, where she conduced astrophysics research for three years on an anomalous type of galaxy.

“The fact that my research project was so fun was further indication that I should keep pursuing physics for a while,” she says.

Indeed, she continued with physics at MIT even before her freshman classes began. At PhysPOP, a freshman preorientation program run by physics undergraduate students, Weiss attended a talk by David Kaiser, the Germeshausen Professor of the History of Science and professor of physics.

Though freshmen didn’t usually pursue theoretical physics research projects through the Undergraduate Research Opportunities Program (UROP) until they had taken a few classes, Weiss was determined to get involved immediately in the research Kaiser described. “Not only was his research exciting, but he was so personable and so passionate and so able to explain the material that I was taken by it. I went up and asked him for a UROP right afterward,” she says.

She likens her experiences as a freshman undertaking a UROP in quantum mechanics to drinking from the firehose, a common expression used to describe academics and activities at MIT. Luckily, as she puts it, she had support from her research advisors including Kaiser and Joseph Formaggio, an associate professor in the Department of Physics and the Laboratory for Nuclear Science, as well as from the graduate students and postdocs in her lab.

With 18 months of quantum mechanics and particle physics research under her belt by junior year, Weiss enrolled in Junior Lab, a two-semester experimental physics sequence in which students recreate historical physics experiments each month. At the end of the optional second course in the sequence, students design an experimental apparatus to test a topic of their choice. Weiss and her partner focused in on parity, which refers to a transformation that flips the right- or left-handedness of a coordinate system in quantum mechanics.

“We were working on putting together an experiment that had originally been conducted in the late ’50s, including by someone who is a professor emeritus at MIT,” says Weiss, referring to nuclear physicist Lee Grodzins.

When Grodzins heard Weiss and her partner were recreating his experiment, he visited them at the Junior Lab. “When he heard we were recreating his study, he was so enthusiastic that he graciously visited to assist us with our theoretical and experimental questions,” she says. “That’s a very MIT-like experience — one you can’t find in many other places.”

While visiting the students in the lab, Grodzins also recounted tales of his career. “He also would tell us about what it was like being at Brookhaven [National Laboratory] during the Cold War era. It sounded like a really exciting time to be doing physics,” Weiss says.

Performing on and off stage

Though her research community remains her “home base,” Weiss has also been active in MIT’s theater scene and its Jewish community, through MIT Hillel.

From Dramashop, to the Musical Theater Guild, to the Shakespeare Ensemble, “I’ve been engaged with almost all the different theater communities at some point,” she says.

After Rabbi Gavriel Goldfeder, the senior Jewish educator at MIT Hillel, reached out to students for ideas that could lead to Jewish engagement in the arts on campus, Weiss proposed a Jewish theater discussion group.

“Since junior year, I haven’t been acting in plays anymore, but I have been able to combine my connection with the theater community with my connection with the Jewish community, because I now have developed and led a Jewish theater discussion group through the Hillel,” she says, “We meet a few times throughout the semester and read a play or an excerpt from a play that deals with issues related to Jewish history, identity, politics, issues of assimilation — a whole range of topics.”

She curates the selection of plays and excerpts herself. Because some of the students involved in the discussion group have theater backgrounds, they sometimes act out the excerpts. For Weiss, leading the discussion group is “a fun way for me to get to be engaged in two communities at once.”

In her junior year, Weiss enrolled in Course 17.30 (Making Public Policy), a class in the political science department. “I just remember, I was always so excited to go to a 9:30 a.m. class, to an unusual extent, and to talk with [Professor Andrea Campbell] after class, and to do all of the assignments and to write the papers. That was definitely telling for me.”

“Political science was so totally engaging for me right away,” says Weiss. So much so, that Weiss decided to minor in it.

The summer before her senior year, Weiss interned at the MIT Washington Office. She reported on Congressional hearings by day and helped analyze how science impacted federal policymaking. The experience gave her a firsthand account of the divide between the scientific and political worlds, which she now hopes to address in the future.

“Scientific thinkers aren’t necessarily expected to consider moral and ideological and political questions in detail, and the same is true the other way around,” she says.

Weiss is optimistic that her experiences conducting research, leading discussions, and interacting with policymakers have given her the background necessary to tackle the issues she identified in Washington. She hopes to continue studying policy and political science after MIT, and wants to actively address the current disconnect between scientists and policymakers in her future work.

“I think that this cultural divide has to be addressed by not only by building relationships between policymakers and scientists, but also from the ground up, educating in a way that enables people to understand those who think differently than them,” she says.