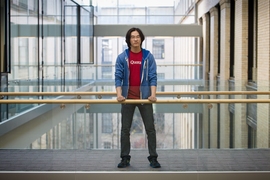 ↓ Download Image
Caption: “At heart I’m still looking for good stories that explain things I see in the world around me,” says senior Kevin Zhou.

Caption:
“At heart I’m still looking for good stories that explain things I see in the world around me,” says senior Kevin Zhou.

Kevin Zhou wants to tell new stories about the physical world we inhabit.

“My life plan has always been to eventually become a theoretical physicist,” says the MIT senior.

The plan seems to be working. About to graduate with dual degrees in physics and mathematics, Zhou is a co-author on three papers being published this month in peer-reviewed journals. This fall, he will head to Cambridge University as a 2017 Marshall Scholar.

Zhou hopes the Marshall Scholarship will provide him the time and resources to explore his varied interests, which encompass thermodynamics, particle phenomenology, and biophysics. “If I went straight to a PhD program, a lot of doors would instantly close, and I might not ever know about other possibilities,” he says.

Zhou will spend the first year at Cambridge studying applied mathematics and theoretical physics, and the second year studying particle physics at Durham University, home to the Institute for Particle Physics Phenomenology. “I’m going to explore all around,” he says with an eager smile.

Beyond his study of math and physics at MIT, Zhou has pursued burgeoning interests in music and economics, computer science, public policy, and machine learning — all while conducting rigorous and original research in two different physics labs.

With Jeremy England, the Thomas D. and Virginia W. Cabot Career Development Associate Professor of Physics at MIT and leader of the Physics of Living Systems Group, Zhou has been exploring the thermodynamic constraints of living systems.

Zhou sought out England as a mentor after reading his work on the theoretical limits of how efficient cells can be at reproducing. “I thought [his work] was really mind-blowing, because it’s [about] really powerful mathematical constraints that are being used for life, which we think of as messy and difficult to characterize,” he says.

“We were investigating the cost of maintaining certain kinds of order in nonequilibrium states,” he explains. “Thermodynamically, everything wants to relax back to equilibrium. In equilibrium, energy would be distributed uniformly. This coffee cup will eventually be the same temperature as the rest of the room.”

But life has to maintain itself in nonequilibrium states. At the cellular level, nutrients, waste products, and chromosomes are corralled or clustered in specific places. “So the question is, just from the mathematical structure of thermodynamics, what kind of chemical and energetic costs are there to maintaining this structure?” he says.

Zhou’s work has focused on identifying these kinds of theoretical bounds, as a way to characterize how “expensive” it is for cells to perform functions such as DNA repair.

“We haven’t found the secret of life, obviously,” he laughs, “but we hope to find more constraints like this that give a hint as to what cells can do and what they can’t.”

Zhou has also pursued a totally different branch of physics with equal vigor. He has worked with associate professor of physics and researcher at the Laboratory for Nuclear Science Jesse Thaler, to aid in the search for new particles at the Large Hadron Collider at CERN in Switzerland, by analyzing the “sprays” of particles produced by high-energy collisions.

“An important goal of particle physics in colliders is to figure out how to go back from these 'jets' of particles to the individual, possibly new particles that produced them,” Zhou says.

He has been developing new techniques to analyze these end states for clues to the intermediate decay products that precede them.

Zhou’s research also aims to help bridge between the work of experimentalists at CERN and theorists, guiding in the formulation of experiments to look for new particles predicted by theory. He’s investigating how to make the Large Hadron Collider more sensitive to new physics, ranging from dark matter to supersymmetry, by looking at the substructure of these jets, he explains. “These techniques were instrumental for finding the Higgs boson, and hopefully they'll lead the way for whatever's next.”

Zhou traces his interest in physics back to walks with his parents as a young child. “When I was a kid, I was always asking endless questions: ‘What is this tree? What is this bird?’ My parents spent a lot of time and effort introducing me to mathematical and physical things. You know, give him an especially tricky problem, and he’ll be quiet for an hour!”

Two other seminal experiences further fueled his passion for physics. “When I was 15, I picked up a freshman physics textbook,” he recalls. It was full of problems about blocks and ramps and pulleys. “It seems dry, but when I read it I was completely captivated because it felt at once so powerful — mathematically pinned down — but also so concrete and applicable. I'd walk around, tossing things up and down, thinking about how it all fit together.”

Soon after, he attended the U.S. Physics Team training camp. “It was one of the best experiences of my life,” he says. “We’d just be sitting there chatting about special relativity or thermodynamics after class.”

Zhou has investigated other possible paths. His mother is a software engineer, and his father a hardware engineer, but Zhou’s own interest in computer science didn’t blossom until junior-year internships in Silicon Valley, at Facebook and Dropbox.

He now has more software coding experience than a typical physics student. “It’s a good tool to have in your toolbox. You can put something together and say, ‘Let’s test this hypothesis numerically.’”

He relished learning the craft of constructing good software, but ultimately, he kept coming back to physics.

“I’d be working on some distributed system for database management, and during my lunch break I’d be reading some physics textbook, trying to figure out how quantum mechanics works,” he says. “At the end of my second year I decided that's what I want to do, period, and decided to go all in.”

Now Zhou volunteers to cultivate that same passion in young students. He is helping write the exam for the Physics Olympiad, which helps determine admission to the summer camp that he attended. He also lectures at the camp, finding it helps him stay grounded. “When you do theoretical stuff, it’s easy to lose sight of concrete things like electromagnetism or waves, classical physics — stuff that’s old-school but that explains so much of what we see around us.”

Dark matter is yet another field that Zhou wants to “check out” over the next few years. Before he heads to England, Zhou is planning to work with researchers at MIT, including Thaler, who are leading an ambitious experiment called ABRACADABRA (A Broadband/Resonant Approach to Cosmic Axion Detection with an Amplifying B-field Ring Apparatus), which seeks to develop ways to detect dark matter particles called axions.

From the pull of dark matter to the limits of life’s processes, Zhou says one of the things he loves the most about physics is how it helps him connect to and understand the world around him.

“I find it very rewarding. It grounds you all the time. At heart I’m still looking for good stories that explain things I see in the world around me.”