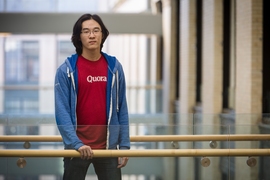 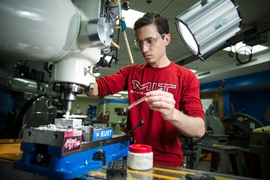 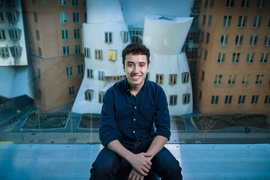 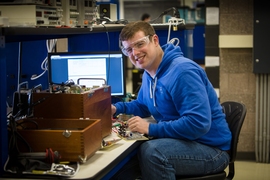 Funded by the British government, the Marshall Scholarships provide exceptional young Americans the opportunity for two years of graduate study in any field at a U.K. institution. Up to 40 scholarships are awarded each year in the rigorous nationwide competition. Scholars are selected on the basis of academic merit, leadership potential, and ambassadorial potential.

“The Presidential Committee on Distinguished Fellowships is so proud — as am I, personally — to have had the opportunity to help all the nominated MIT students through the Marshall Scholarship process,” says Kim Benard, assistant dean of distinguished fellowships and academic excellence. “Matthew, Zach, Kevin, and Daniel represent the very best of MIT. We have also had the great pleasure to work with students who ultimately didn’t win, but who will have extraordinary careers that will increase the reputation of MIT.”

Matthew Cavuto, from Skillman, New Jersey, is an MIT senior majoring in mechanical engineering with a concentration in biomechanics and biomedical devices. As a Marshall Scholar, Cavuto will engage in advanced prosthetic and assistive technology research over the course of two years of study in the U.K. at Imperial College London and Cambridge University.

In his first year, Cavuto will pursue an MS in biomedical engineering (concentrating in neurotechnology) at Imperial College London, working with Tim Constandinou on the SenseBack Project, an initiative aimed at allowing amputees to feel through their prostheses. In his second year, he will earn an MPhil in Engineering at Cambridge University, under the supervision of Fumiya Iida in the Bio-Inspired Robotics Laboratory, designing assistive technologies and exoskeletons through imitating nature. Cavuto plans to eventually earn a PhD in biomechatronics with the goal of revolutionizing accessible mobility for the paralyzed by designing the world’s first successful robotic exoskeleton.

Cavuto became interested in creating the next generation of prostheses and assistive devices while volunteering at New Jersey’s Kessler Institute for Rehabilitation, where he observed firsthand the challenges faced by amputees. During a summer internship through MIT International Science and Technology Initiatives (MISTI) at Germany’s Technical University of Berlin, Cavuto investigated the development of a prosthetic exoskeleton to rehabilitate stroke patients. As a researcher at the MIT Global Engineering and Research (GEAR) Lab, Cavuto has investigated and prototyped new designs for prosthetic knees tailored for people living in developing countries. He currently leads a team that, with nongovernmental organizations in India, has developed and field-tested a low-cost device that allows above-knee amputees to cross their legs. With a patent pending, he hopes to soon transition to manufacturing and distribution of the device to the millions of amputees living in the developing world.

In extracurricular activities, Cavuto participates in varsity fencing and is an award-winning ballroom dancer and woodworker. Amos Winter, assistant professor in the Department of Mechanical Engineering and the director of GEAR, says, “Matt represents the finest of our students at MIT. He has taken just about every hands-on engineering design course offered at MIT, and he is a prolific carpenter, designer, and artist. Matt exemplifies MIT’s motto of ‘mens et manus,’ or, mind and hand.”

Zachary Hulcher, from Montgomery, Alabama, is pursuing a dual major in electrical engineering and computer science and physics, with a minor in mathematics. As a Marshall Scholar, he will study and perform research in high-energy physics at Cambridge University, following in the footsteps of such luminary physicists as Newton, Maxwell, and Hawking. Hulcher plans to earn a PhD and, as a professor of physics, make contributions to expand the field of high energy physics.

Hulcher spent his sophomore summer conducting research with Professor Yen-Jie Lee at the Compact Muon Solenoid (CMS) Experiment at CERN’s Large Hadron Collider in Geneva, Switzerland. He returned to CERN his junior summer to continue with and present on his research. Since the fall of 2015, he has been a research assistant in the group of professor Krishna Rajagopal of MIT's Department of Physics and Center for Theoretical Physics, which is part of the Laboratory for Nuclear Science. Hulcher has been improving the analysis and modeling of how CMS measurements can be used to probe quark-gluon plasma, a substance connected to the Big Bang that may lead to greater understanding of the formation of the universe. “Zach took on, mastered, and then drove a theoretical physics research project,” observes Rajagopal. “He will be the principal author of a paper describing an important advance, and he showed fearless confidence in giving a talk at an international workshop in which he showed new results (some only hours old) that garnered much attention. All the while, he is both well-grounded and well-rounded.”

Hulcher is also motivated by a desire to teach others. He has been a teaching assistant for the physics department at MIT, a grader in the mathematics department, and a tutor for MIT’s chapter of Eta Kappa Nu, the national honor society for electrical engineering and computer science. Through MISTI's Global Teaching Labs, he traveled to Xalapa, Mexico, to assist with courses focused on mobile and internet technologies, and he taught courses on physics to high school students in Italy and Israel.

Since his freshman year, Hulcher has been an offensive lineman with MIT’s varsity football team and was named this year to the NEWMAC all-academic team for his outstanding scholarly and athletic performance. Hulcher also serves on the executive board for the MIT chapter of the Tau Beta Pi engineering honor society.

Kevin Zhou, from Carlsbad, California, will graduate next June with dual bachelor’s degrees in physics and mathematics. He will then embark on a two-year course of study at Cambridge University and the University of Durham. In his first year, Zhou will acquire an MAst in Cambridge’s department of applied mathematics and theoretical physics by completing part III of the Mathematical Tripos course. In his second year, he will earn an MS at Durham’s Institute for Particle Physics Phenomenology. When he returns to the U.S., Zhou will pursue a PhD in particle physics. He ultimately plans to be a research professor in theoretical physics and contribute to new methods to teach physics.

Zhou is currently involved in two MIT physics research groups. In the Physics of Living Systems Group, led by Jeremy England, the Thomas D. and Virginia W. Cabot Career Development Associate Professor of Physics, Zhou is researching the thermodynamics of DNA damage and repair, and has co-authored a paper on nonequilibrium states that has been submitted to Physical Review Letters. “Kevin has a polyglot sort of fluency in different idea-spaces that makes him able to see where the math might be applicable in ways that very few people can,” says England. Zhou is also working with associate professor Jesse Thaler of MIT's Department of Physics and Center for Theoretical Physics, whose research group uses quantum chromodynamics to analyze the structure of jets, the sprays of particles produced in high-energy collisions. Zhou has been developing cutting-edge analytic techniques for determining the problem of quark/gluon discrimination; his efforts will be applied in the search for new physics at the Large Hadron Collider at CERN.

Zhou received honorable mention at this year’s prestigious Putnam Mathematical Competition for college students. In addition to his passion for pure mathematics, Zhou is intrigued by computer science and has interned as a software engineer at Dropbox and Facebook.

Zhou is committed to helping the next generation of physics students and researchers. As vice president of the Society of Physics Students, he directed a summer reading group for his peers on advanced mathematical methods and taught STEM classes to middle school students through the MIT Splash program. He is a junior coach for the U.S. Physics Olympiad where he has developed and taught classes on physics concepts and mentored students at yearly training camps. Zhou also enjoys singing and has performed with the MIT Concert Choir and MIT Centrifugues.

Daniel Zuo, from Memphis, Tennessee, is graduating next June with a bachelor’s degree in electrical engineering and computer science, an MEng in electrical engineering and computer science, and a minor in creative writing. At Cambridge University, Zuo will do two consecutive one-year master’s degree programs: an MPhil in advanced computer science and an MPhil in machine learning, speech, and language technology. After completing his studies in the U.K., Zuo will pursue a PhD and hopes to develop a startup venture that will advance internet connectivity in the developing world. He ultimately plans to teach and conduct research as a professor of computer science.

Zuo is particularly interested in lossless datacenter architectures and their potential to help people interact more effectively with massive amounts of data. He is currently a research assistant for TIBCO Career Development Assistant Professor Mohammad Alizadeh in the Networks and Mobile Systems group at MIT’s Computer Science and Artificial Intelligence Laboratory (CSAIL). Alizadeh’s group works to improve the performance, usability, and robustness of networks and cloud services; Zuo has been investigating algorithms that provide scheduling and congestion control to enhance network performance. “Daniel is brilliant,” Alizadeh says. “It’s been a joy to work with him. He is one of those rare students that can jump into an unfamiliar area and quickly figure out exactly the right way to think about the hard technical problems.”

Zuo has also conducted research in Professor Manolis Kellis’ group at CSAIL, which focuses on computational methods for accessing large data sets for the analysis of human disease. He developed “greedy” algorithms to produce a comprehensive set of overlapping enhancers across cell types for a specific gene. He has also worked as a software engineer at several technology and finance companies, including Electronic Arts, Arcadia Funds, and Complete Solar Solutions. Zuo’s own projects include Fold, a mobile payment service to allow easy and secure peer-to-peer Bitcoin transactions over Bluetooth technology.

In his freshman year, Zuo helped launch MakeMIT, the largest hardware hackathon in the nation, and has continued his involvement with the project as a committee member with the MIT student organization TechX. Zuo is also active in public service in the Boston community through his leadership roles with the Phi Kappa Theta fraternity.